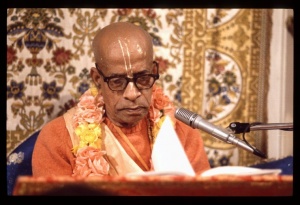 1st lecture at Sri Goudiya Math, Royapettah, Madras under the presidency of Swami B. P. Puru Maharaj at 6P.M.

The news was published in the engagement columns of The Indian Express, the Hindu, the Mail on Sunday the 10/9/50.

Causes of the Crisis

1) The crisis that confront us are all man-made

3) Nature is the agent of Godhead

4) She is unkind to Ashuras (Bengali script)

6) The difference between Ashuras & Suras.

9) These asuras do not believe in the existence of Godhead.

13) Rise of prices in gold standard.

16) Fight of Mohisasura with Durga is the symbolic representation of such godless civilization.

17) Nature becomes mercilessly unkind to the race of Mohishasuras.

18) The tangle of time & space its disastrous effects.

20) No solution of primary necessities, such as boarding, lodging & clothing.

22) Sense gratification is the only pivot. Sheer animalism.

23) Civil-disobedience against the plan of Godhead.

25) Man is born with devolved consciousness.

27) Such consciousness is graduated to the higher plane of God consciousness. The Sastras give us right direction to such goal.

X1. Sree Krishna the Absolute Personality of Godhead can be known through the transcendental loving service. (BG 18.55) (BG 7.3)

2. Real happiness is obtainable only through this transcendental

3 Man tries to remove his difficulties by work and when baffled in that attempt he tries to get rid of the material bondage by an exercise of the mental faculty. But real happiness does not lie either on the bodily or mental plane. (BG 6.21-22). (BG 3.41) (BG 2.14)

4. Bhagwat Geeta is the cream of all the Vedas, Puranas, Upanishads and allied other scriptures. (BG 4.1-3) and Sree Krishna the Absolute Personality of Godhead reveals Himself as He is in the Bhagwat Geeta (BG 15.15)

6. Sree Krishna is recognized by Sri Arjuna as the Supreme Personality of Godhead not only on the strength of the authoritative recognition of the great saints & sages (BG 10.12-16) but also on his own transcendental personal experience as constant friend and companion of Sree Krishna (BG 11.1-4)

7. By the materialists Sree Krishna is perceived in Impersonal display of material energy (BG 10.13-42)

8. The whole material existence is maintained by His material energy (BG 9.4-10) and He keeps His watch over it by His Plenary Portion Known as Paramatma (BG 15.12-17).

10. Sree Krishna is perceived by the transcendentalists in His Three transcendental features namely (1) Impersonal Brahma (BG 14.27), His Plenary Portion Paramatma (BG 15.17) and Purushottam the Supreme Personality of Godhead (BG 15.18)

13 But Sree Krishna Himself is the Absolute Personality of Godhead (BG 7.7)

16. It is mistake therefore to conclude that material world evolves out of its own energy. It is the energy of Sree Krishna (BG 9.4-10)

17. Sree Krishna Himself or His other plenary portions descends in this material world in different period in order to keep in order His creation of material energy (BG 4.6-9)

18. Such incarnations of Godhead are innumerable but they are not created by man-made ideas. They are all described in the Scriptures as Vedas, Puranas etc. (BG 16.23)

19. Sree Krishna appears Himself once in a day of Brahma the Lord of the universe (BG 8.17).

Some facts and figures on The Bhagwat Geeta.

3. The material world is born of the external energy of the Lord.

6. That spiritual sky is self illuminated and there is no need of the sun or the moon. (BG 15.6)

8. There are living being also in that spiritual sky who live along with God and the living being who is now engaged within the material world may also go there after leaving this material body provided he trains himself up as the pure devotee of the Lord. (BG 14.26) (BG 8.11)

10. Materialistic living beings who are rotting in this material atmosphere and suffering from material pangs, specifically the pains of birth, the pains of death, the pains of old age and the pains of diseases, can get complete relief from all these as soon as they are able to enter into the spiritual kingdom of the Lord. (BG 11.21-32)

12 He manifests in three features namely as the impersonal Brahman which pervades everything both material and spiritual. As super soul He enters every thing and every particles and thus maintains the existence. But at the ultimate issue He is a Person and His Personality supercedes all other personalities.

13. The demigods like Brahma etc are as much part and parcel living entities as we are but they are invested with more power and deputed as different predominant factors in different planets.

14. But no body is equal or greater than the Lord.

15. Men with ordinary merit worships the demigods and the benefit derived from such worshipful activities are temporary. For permanent result one must fully surrender unto the Supreme Lord.

16. The worshippers of the demigods go to the respective planets predominated by such demigods but one who worships the Lord goes back to Godhead for eternal life, bliss and knowledge. That is the highest perfection of life.

17. The Bhagwat Geeta advises every one to attain this highest perfection of life i.e. to go Back to Godhead by practising the process of Bhaktiyoga and the Lord advises also to His devotees to preach this cult everywhere. No body is dearer to Him than one who preaches the message of the Bhagwat Geeta.