770604 - Srila Prabhupada's Declaration of Will 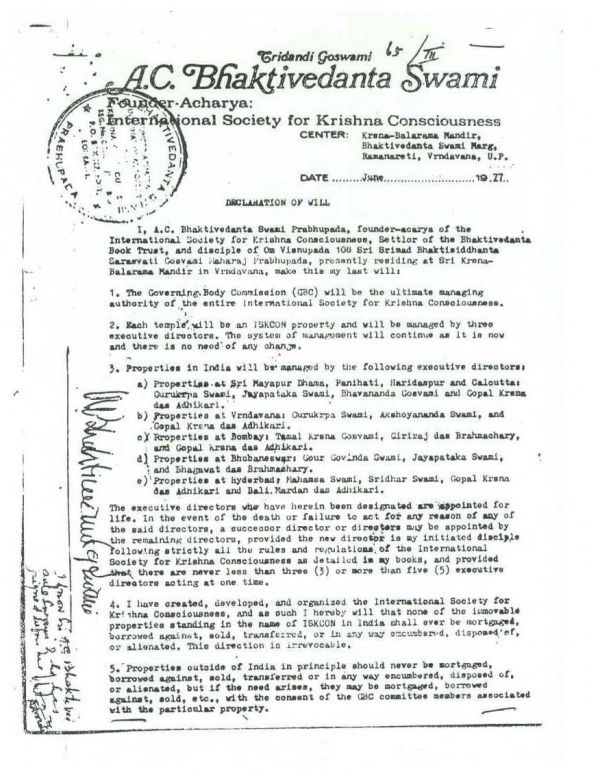 Srila Prabhupada's Declaration of Will (Page 1) 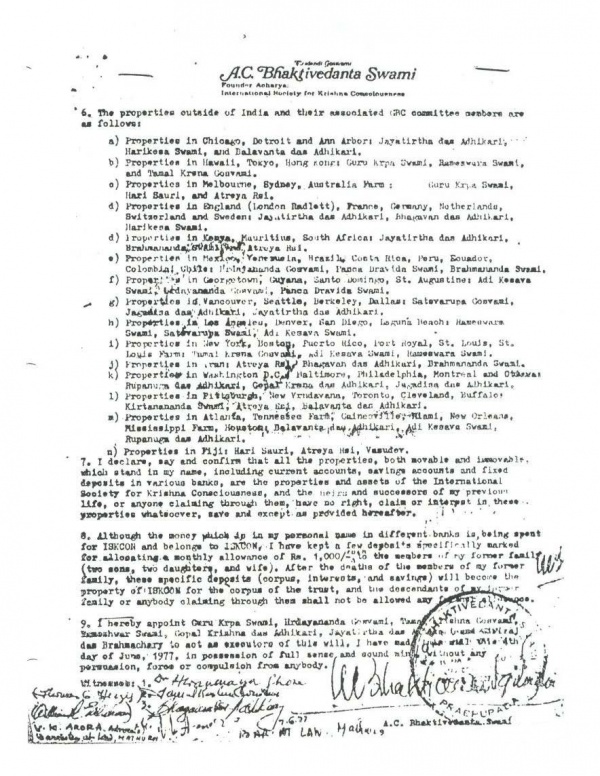 Srila Prabhupada's Declaration of Will (Page 2)

1. The Governing Body Commission (GBC) will be the ultimate managing authority of the entire International Society for Krishna Consciousness.

2. Each temple will be an ISKCON property and will be managed by three executive directors. The system of management will continue as it is now and there is no need of any change.

3. Properties in India will be managed by the following executive directors:

The executive directors who have herein been designated are appointed for life. In the event of the death or failure to act for any reason of any of the said directors, a successor director or directors may be appointed by the remaining directors, provided the new director is my initiated disciple following strictly all the rules and regulations of the International Society for Krishna Consciousness as detailed in my books, and provided that there are never less than three (3) or more than five (5) executive directors acting at one time.

4. I have created, developed, and organized the International Society for Krishna Consciousness, and as such I hereby will that none of the immovable properties standing in the name of ISKCON in India shall ever be mortgaged, borrowed against, sold, transferred, or in any way encumbered, disposed of, or alienated. This direction is irrevocable.

6. The properties outside of India and their associated GBC committee members are as follows:

7. I declare, say and confirm that all the properties, both movable and immovable, which stand in my name, including current accounts, savings accounts and fixed deposits in various banks, are the properties and assets of the International Society for Krishna Consciousness, and the heirs and successors of my previous life, or anyone claiming through them, have no right, claim or interest in these properties whatsoever, save and except as provided hereafter.

9. I hereby appoint Guru Krpa Swami, Hrdayananda Gosvami, Tamal Krishna Gosvami, Rameshwar Swami, Gopal Krishna das Adhikari, Jayatirtha das Adhikari and Giriraj das Brahmachary to act as executors of this will. I have made this will this 4th day of June, 1977, in possession of full sense and sound mind, without any persuasion, force or compulsion from anybody.