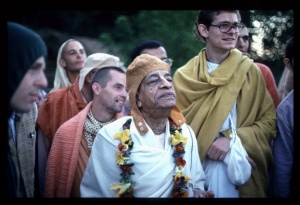 Prabhupāda: . . .of this human being, people do not know how they are kept in ignorance. And . . . (break) . . .because we are part and parcel of Kṛṣṇa, out of His causeless mercy He comes to deliver us from this ignorance. Unfortunately, they are so much engrossed by the illusory energy, they do not take advantage of the instruction of Kṛṣṇa. So therefore this Kṛṣṇa consciousness movement is being propagated that these dull-headed mūḍha—they are being described as mūḍha, dull-headed—they do not know actual interest of life. Na te viduḥ svārtha-gatiṁ hi viṣṇum (SB 7.5.31). These dull-headed conditioned souls, they do not know their real self-interest, being influenced by māyā. Māyā is also Kṛṣṇa's energy, so it is her duty to punish the conditioned soul because they have decided to forget Kṛṣṇa. Still, Kṛṣṇa is so merciful, He comes personally, He authorizes His devotee, servant, to enlighten these conditioned souls. Now our Kṛṣṇa consciousness movement is an humble attempt to raise the standard of these conditioned souls to Kṛṣṇa consciousness. Those who are engaged in this business, they should personally behave as devotee, and by their example they should teach others and elevate them from this gross ignorance of materialistic life. Thank you very much.

Rāmeśvara: Either by your books, by the dioramas and by the dancing.

Tamāla Kṛṣṇa: So what was your opinion, Śrīla Prabhupāda?

Tamāla Kṛṣṇa: They also have a performance to show you of Satish Chandra Ghosh's play. Satish Chandra Ghosh, remember that play that we received in Māyāpur, that Nitāi had translated? "Lust and Envy." You gave it to Madhudviṣa, myself and Sudāmā, and you were saying, "Just think how to perform this."

Sudāmā: Ghosh. He's a playwrite. In Māyāpur we received two scenes that Nitāi had entire translated in Vṛndāvana—in January when we were there together.

Tamāla Kṛṣṇa: So they've prepared one of his dramas also. We wanted to show you on Friday. Actually, we can show you Wednesday now. We'll only be leaving Thursday. Wednesday night.

Prabhupāda: So how'll you show the incomplete?

Sudāmā: In Māyāpur you were interested to see the first . . . or see the scene of the enemies—anger, lust, greed, envy—so we have worked on it.

Sudāmā: Yes, Kali. So as the scenes come, we are planning to work on them in that succession.

Prabhupāda: So you have already worked?

Tamāla Kṛṣṇa: They have made a very accurate portrayal of the material world. Actually, the guests who come on Sundays, they very much appreciate these performances. I've seen myself sometimes at the end of the performance, they will give a very big ovation of applause. For even one, two minutes in a row, they continue to applaud. They very much appreciate it. People are fond of seeing things enacted in theater and dance.

Tamāla Kṛṣṇa: No, all the guests come. No, actually this kind of performance will be more appreciated even . . . I mean the ordinary American people will very much appreciate it.

Prabhupāda: Do they come?

Tamāla Kṛṣṇa: Oh, yes. Usually at least half or more of our attendance on a Sunday is from the Americans.

Sudāmā: And here in New York is very much a theatrical city, entertainment, Broadway and . . . This theater we have here in our temple is situated in off-Broadway. Our theater downstairs is as high a standard in its interior as any other off-Broadway theater house.

Tamāla Kṛṣṇa: There's two classes: Broadway and off-Broadway theater. Two different classifications. Broadway is very costly, big productions, very elaborate, and off-Broadway is more simple, but also very often there are good plays there. So this particular temple is located in an off-Broadway location. And actually it's very prestigious. We can advertise, and people will attend. They will definitely attend, and they'll even pay for the performances. We don't feel that we should charge yet, until the caliber of the performance is first class and until they have some full program. Because right now, just like this play only took about . . . the dance only took about twenty-five minutes.

Tamāla Kṛṣṇa: Yes. Unless they have something that is at least two hours, one and half, two hours, you cannot charge for. People will definitely pay.

Prabhupāda: Pay or not pay, doesn't matter. They should understand the meaning.(?)

Tamāla Kṛṣṇa: Did you feel that the message of the Gītā came through?

Sudāmā: The precedence of our work, Śrīla Prabhupāda, should definitely be that the message of Kṛṣṇa consciousness is clearly understood by all, is that correct?

Prabhupāda: Along with it, if you, the same thing, more demonstrative, if you put some movies . . .

Prabhupāda: Slide or movie, that will be more impressive.

Sudāmā: Mixed media. That is also very much appealing to the public. Our future projection plan is to work on the advent of Lord Kṛṣṇa for Janmāṣṭamī, which is about an hour production to an hour and a half. And then we were planning to work on the Rāmāyaṇa, if it was suiting or agreeable by Your Divine Grace.

Prabhupāda: The whole basic principle is this, that people should understand that, as I was explaining this morning, the sat and asat. So at the present moment we are living in the way that is asat. But there is another life, sat. So this Kṛṣṇa consciousness movement is an educational movement to raise the person from the asat platform to the sat. Under illusion they are, what is called, amock? What is called? Amock? They (laughs) have gone amock. They have gone amock. So it is a humble attempt to stop their this suicidal policy. They are practically committing suicide. They do not know what is the value of life and how they are spoiling it, this valuable life. Bahir-artha-māninaḥ. Durāśayā ye bahir-artha-māninaḥ (SB 7.5.31). They are trying to adjust things by the arrangement of external energy. That is not possible. Whatever adjustment they are making, so many big, big leaders, politicians, they came, Napoleon, Hitler, Gandhi, this, that. By the waves of material nature everything is driven away. In that way there is no possibility of adjustment. It is not . . . Kathacaturānanam mali mali javanam(?) How many, caturānana. Caturānana means Brahmā. They come and go, come and go. And there is no permanent life; it is all asat. So they should come to the sat platform, that is perfect. The more you remain strong in your spiritual life, then more it will be impressed, it will act. And if it actually is not spiritual life but theatrical performance, then it will not help.

Bali-mardana: Hmm. Very important. In your book you say that when it is acted by pure devotees, then it is powerful.

Prabhupāda: So do your best, try your best. That is very good.