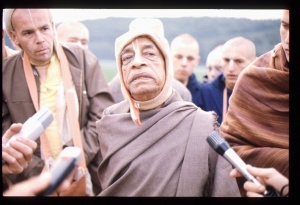 Before I give a lecture, I offer prayers at the Lotus Feet of Sri Radha-Madhava. If all of you kindly settle down , and listen to kirtan to Radha-Madhava for five or ten minutes that would make us very happy.

The kirtana is in Bengali, so you may join us.

Prabhupāda: The place is called Letchmore Heath, Herefordshire near Watford. Seventeen acres of land plus a building. He (George Harrison) bought it for fifty-five lakhs and donated it to us. So, there are many big places . . . "pṛthivīte āche yata nagarādi grāma" (CB Antya-khaṇḍa 4.126). This has already spread to the towns, now even in the villages, we send devotees by bus to chant the holy name. They travel from village to village, chant Hari-nāma, and distribute our books. The transcendental books distributed are Bhāgavatam, Śrimad Bhagavad-gītā, Caitanya Caitanya-caritāmṛta that are revealed scriptures. At least forty to fifty thousand Rupees of literature is distributed worldwide. This is a matter of great pride for India.

This statement made by Caitanya Mahāprabhu is not a figment of some madman's imagination, His word is the word of Bhagavān, the Supreme Person, and that can never be untrue.

So, I have tried a little bit. As you know, our Bhaktisiddhānta Sarasvatī Ṭhākura Gosvami Gosvāmī Mahārāja. He, and before him Bhaktivinoda Ṭhākura. Bhaktivinoda Ṭhākura, Kedāranātha Datta, was respected by Ṣiṣir Bābu like an older brother, and we have learnt this through the disciplic succession. It was Bhaktivinoda Ṭhākura's desire that Indians and foreigners, like the Americans and Europeans, perform kīrtana together. This was his desire. It is mentioned in his book, "When will that day come, when Indians, European and Americans will chant Jaya Sacinandana' together." Due to his blessings, this has been possible. When Guru, Vaiṣṇavas give their blessings, it becomes possible. Our Gurudeva had sent some of our Godbrothers but it did not have much of an effect.

At the age of seventy . . . even I was told by Gurudeva to go, however, I considered myself unqualified . . . thereafter, at seventy years of age, when I observed that my Godbrothers were not successful, I decided to try. In September 1965, I requested Sumatī Morārji of the big shipping company, for a return ticket by ship, and travelled by cargo ship. I suffered a lot on my way there. I think I had a heart attack on the ship. I could not eat anything due to sea-sickness, but . . .

Śrīla Rūpa Gosvāmī says that Kṛṣṇa-bhakti rasa . . . everything has a rasa, or a mellow. If there is no mellow, then there is no relish. Kṛṣṇa-bhakti has a transcendental mellow. Kṛṣṇa is akhila-rasamṛta-sindhu, the reservoir of all pleasures, and we have written a book about this. That transcendental pleasure has been liberally distributed to the world by Caitanya Mahāprabhu, in a simple manner. That too Rūpa Gosvāmī has stated that. When Śrīla Rūpa Gosvāmī met Mahāprabhu at Prayāg, for the second time, he said,

He was a eternally liberated close associate of the Supreme Person, Bhagavān. Earlier, he was Rūpa-mañjarī. Just as Caitanya Mahāprabhu was Kṛṣṇa earlier.

There is a slight difference between Mahāprabhu Himself, and Mahāprabhu's mercy. Not a difference but something concealed and difficult to understand.

The Holy Name. Hanumānjī said: "Jaya Rāmacandra!" and the ocean created a path, whereas Rāmachandra, the Supreme Person Himself, had to build a bridge with rocks, even though those rocks, by His Will, were able to float. The Supreme Person, Bhagavān, possesses acintya-śakti, or inconceivable powers, or unlimited powers. Just like that Mahāprabhu liberated many very sinful people in India, and by His mercy, there are many sinful people being liberated all over the world. Therefore, His mercy is even greater than Himself. Please give this thought that by Mahāprabhu's mercy, He has said:

This is for universal benefit. The stupid people of this world do not know what the aim and objective of life is. There are so many big, big leaders of political parties, each one declaring agendas and making big slogans but they do not know how to bestow auspiciousness on the people of this world. This is an instruction in the Bhāgavatam.

Narottama dāsa Ṭhākura has sung a song, reiterating the conclusion of the Bhāgatavam in accordance with what is stated in the Vedic scriptures, in simple language. He has sung,

People are not being able to understand the purpose of human life. They are making big, big plans. Factually, the real plan is,

Actually, when after many births and deaths a person becomes truly knowledgeable, and surrenders to the Supreme Person, Bhagavān, that is the ultimate purpose of attaining knowledge. That is real dharma, or supreme occupation. The conclusion of the Bhāgavatam is identical with the conclusion of all bona fide scriptures.

This para-dharma. Para means supreme, uttama or transcendental. The occupation (dharma) which results in devotional service and inspires to bow ones head unto the lotus feet of the Supreme Person, Bhagavān, that is para-dharma or supreme occupation.

That is why the Supreme person, Bhagavān, Himself says,

That is the meaning of making ones life successful.

When we will be able to understand who and what the Supreme Person, Bhagavān is, even though is not easy to understand the the Supreme Person who Himself appears and explains who He is. And because the foolish people cannot understand what He says, He then appears as His own devotee to make people understand. He appears as His devotee as Caitanya Mahāprabhu. "Bhaktākhyaṁ bhaktāvatāraṁ namāmi bhakta-śaktikam" (CC Adi 1.14). As Mahāprabhu, what is He saying? What is His mission? Mahāprabhu is saying, "Āmāra ājñāya guru hañā tāra' ei deśa" (Cc. Madhya 7.128).

This country, and whichever country the person is in. "Yāre dekha, tāre kaha kṛṣṇa-upadeśa". (Cc. Madhya 7.128)

This country, Bangladesh, or any other country. If the leaders and politicians listen to what Mahāprabhu says, then it will be auspicious. My request is that they follow Mahāprabhu's instructions. If the leaders accept it, then it will be auspicious. Our Tarun Kanti (Tarun Kanti Ghosh, an Indian politician), even though he is very young, has a lot of respect for Mahāprabhu, and he factually has the qualifications of a good leader because he acknowledges Mahāprabhu.

Mahāprabhu's instruction needs to be understood with better clarity, Mahāprabhu says: "Yāre dekha, tāre kaha kṛṣṇa-upadeśa". Teach everyone what Kṛṣṇa has said, whether it is through politics, sociology and any other medium. If Krsna's the teachings of the Bhagavad-Gītā, as spoken by Kṛṣṇa, can be communicated and explained, then it will be auspicious for the whole world, otherwise there it is not possible. Propagating messages of stupid people will not be beneficial. Perfect:

Sometime back, I visited Moscow, and had a discussion with a renowned personality, Prof. Kotovsky. I mentioned to him that, "There isn't much difference between the ethos your country is based on, and what I am propagating because you belief in prime leadership, and even I believe in supreme leadership. You accept Lenin, and I accept Kṛṣṇa. If Lenin is perfect, then everything is perfect. Similarly, if Kṛṣṇa is perfect, then His leadership is also perfect." The perfect method must be offered. A fake method will be ineffective.

Hence, Mahāprabhu's instruction, "Yāre dekha, tāre kaha kṛṣṇa-upadeśa." This is what we need to repeat. What is Kṛṣṇa's instruction? All these instructions are written in the Bhagavad-Gītā. There is a solution in the Bhagavad-Gītā for shortage of food and the poverty-stricken. He says, "annād bhavanti bhūtāni" (Bhagavad-Gītā 3.14). People need food. By giving people bricks, or by just giving lectures, is not going to fill hungry stomachs. Food grains are needed.

Rain is needed. Rainfall is essential for grains, "parjanyād anna-sambhavaḥ, yajñād bhavati parjanyo", and parjanyo . . . sufficient and timely rainfall is not under human control. It is not possible to manufacture rainfall by creating some scientific formula in a laboratory. This is in the Supreme Person, Bhagavān's hands. Therefore, if the Supreme Person is satisfied, "parjanyād anna sambhavaḥ yajñād bhavati parjanyo yajñaḥ karma-samudbhavaḥ." Yajñā has to be performed. If you want to be happy, accept this one instruction and put it to practice, and see how it works. Yajñā must be performed, and for that if you feel many ingredients like ghee, rice, dal are required . . . but those are in scarcity. No, for Kali-yuga therefore, knowing that there is going to be a shortage of these food grains, it is stated in the sastra,

"Yajñaiḥ saṅkīrtana-prāyair yajanti hi su-medhasaḥ" . . . su-medhasaḥ means one who has a good brain, not one full of cow-dung . . . the ones who have their brains full of cow-dung, are not able to understand. This has been condemned in the Bhagavad-Gita, "kāmais tais tair hṛta-jñānāḥ prapadyante 'nya-devatāḥ" (Bhagavad-Gītā 7.20) Those whose minds are distorted by material desires," and have lost their minds, they worship various demigods. And one who has good intelligence, not full of cow-dung, they are able to follow, always chanting Hare Kṛṣṇa mantra.

Sāṅgopāṅgāstra-pārṣadam. And simply worship by chanting Hare Kṛṣṇa. This is Caitanya Mahāprabhu's message. He is Kṛṣṇa but His appearance is not like Kṛṣṇa. His colour is golden, not like Kṛṣṇa's. And He is always accompanied by His close associates like, Nityānanda, Advaita, Gadādhara, Śrīvāsa and all the Vaiṣnava devotes.

You will see how all your suffering will cease, there will be abundant food grains. This is Caitanya Mahāprabhu and the Supreme Person, Bhagavān Kṛṣṇa's promise, and this is what we are propagating. In the Bhagavad-Gītā, all the knowledge is there, and Mahāprabhu instructs us to talk about Kṛṣṇa's message to every person we meet. Kṛṣṇa's message is the Bhagavad-Gītā, and all the knowledge about Kṛṣṇa is the Śrīmad Bhāgavatam.

If we can preach this message to people, and there are many people who are accepting it. The intelligent people in India must accept this in a serious manner and try distributing this. This will brighten India's future, and bring peace to the world. You will become happy, and we all will be happy. This is the Kṛṣṇa consciousness movement. We are a small number of people trying to spread this message, and we have achieved a lot, so the prominent people accept and spread the words of Mahāprabhu, the entire world will be blessed with auspiciousness. This is what we have to say.