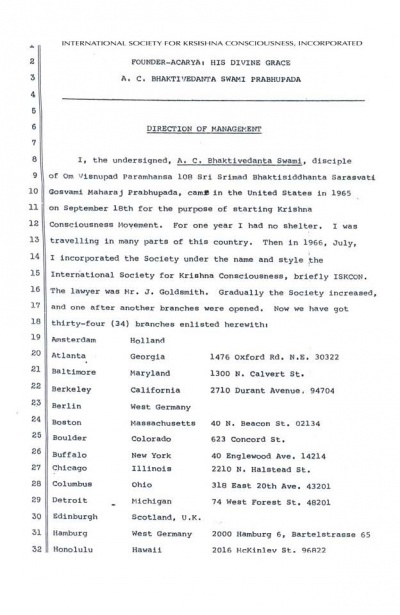 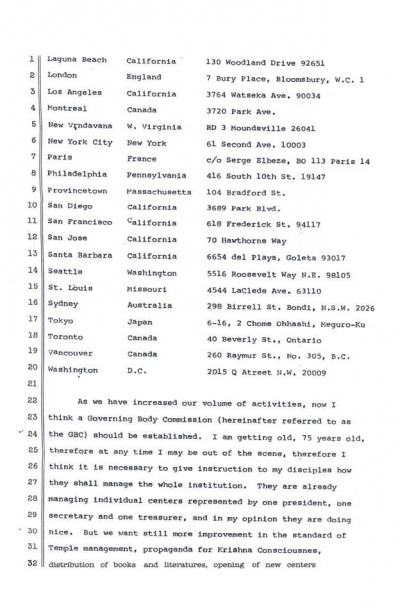 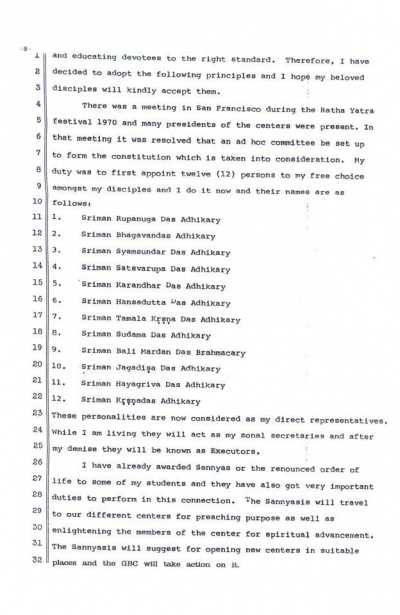 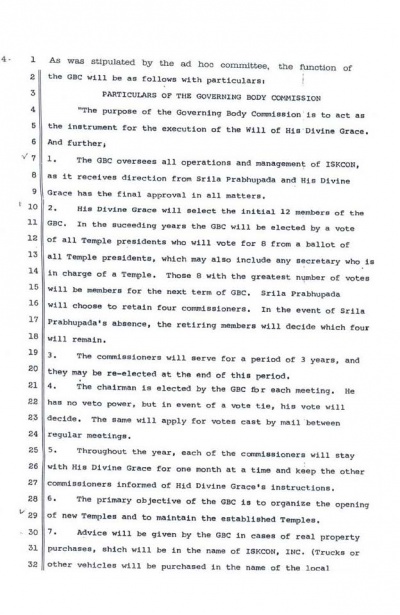 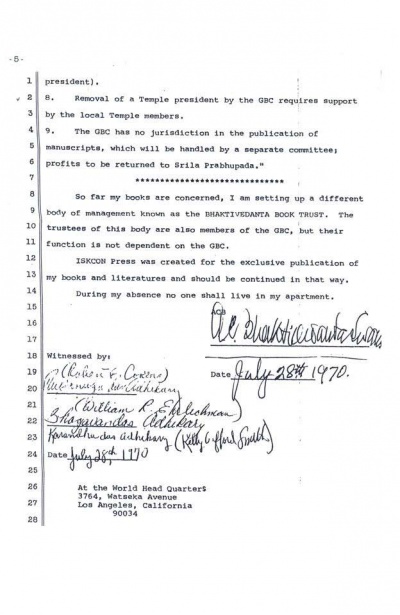 I, the undersigned, A.C. Bhaktivedanta Swami, disciple of Om Visnupad Paramhansa 108 Sri Śrīmad Bhaktisiddhanta Sarasvatī Gosvami Maharaj Prabhupāda, came in the United States in 1965 on September 18th for the purpose of starting Krishna Consciousness Movement. For one year I had no shelter. I was travelling in many parts of this country. Then in 1966, July, I incorporated the Society under the name and style the International Society for Krishna Consciousness, briefly ISKCON. The lawyer was Mr. J. Goldsmith. Gradually the Society increased, and one after another branches were opened. Now we have got thirty-four (34) branches enlisted herewith:

As we have increased our volume of activities, now I think a Governing Body Commission (hereinafter referred to as the GBC) should be established. I am getting old, 75 years old, therefore at any time I may be out of the scene, therefore I think it is necessary to give instruction to my disciples how they shall manage the whole institution. They are already managing individual centers represented by one president, one secretary and one treasurer, and in my opinion they are doing nice. But we want still more improvement in the standard of Temple management, propaganda for Krishna Consciousness, distribution of books and literatures, opening of new centers and educating devotees to the right standard. Therefore, I have decided to adopt the following principles and I hope my beloved disciples will kindly accept them.

There was a meeting in San Francisco during the Ratha Yatra festival 1970 and many presidents of the centers were present. In that meeting it was resolved that an ad hoc committee be set up to form the constitution which is taken into consideration. My duty was to first appoint twelve (12) persons to my free choice amongst my disciples and I do it now and their names are as follows:

These personalities are now considered as my direct representatives. While I am living they will act as my zonal secretaries and after my demise they will be known as Executors.

I have already awarded Sannyas or the renounced order of life to some of my students and they have also got very important duties to perform in this connection. The Sannyasis will travel to our different centers for preaching purpose as well as enlightening the members of the center for spiritual advancement. The Sannyasis will suggest for opening new centers in suitable places and the GBC will take action on it.

As was stipulated by the ad hoc committee, the function of the GBC will be as follows with particulars:

PARTICULARS OF THE GOVERNING BODY COMMISSION

"The purpose of the Governing Body Commission is to act as the instrument for the execution of the Will of His Divine Grace. And further,

1. The GBC oversees all operations and management of ISKCON, as it receives direction from Śrīla Prabhupāda and His Divine Grace has the final approval in all matters.

2. His Divine Grace will select the initial 12 members of the GBC. In the succeeding years the GBC will be elected by a vote of all Temple presidents who will vote for 8 from a ballot of all Temple presidents, which may also include any secretary who is in charge of a Temple. Those 8 with the greatest number of votes will be members for the next term of GBC. Śrīla Prabhupāda will choose to retain four commissioners. In the event of Śrīla Prabhupāda's absence, the retiring members will decide which four will remain.

3. The commissioners will serve for a period of 3 years, and they may be re-elected at the end of this period.

4. The chairman is elected by the GBC for each meeting. He has no veto power, but in even of a vote tie, his vote will decide. The same will apply for votes cast by mail between regular meetings.

6. The primary objective of the GBC is to organize the opening of new Temples and to maintain the established Temples.

7. Advice will be given by the GBC in cases of real property purchases, which will be in the name of ISKCON, INC. (Trucks or other vehicles will be purchased in the name of the local president).

8. Removal of a Temple president by the GBC requires support by the local Temple members.

9. The GBC has no jurisdiction in the publication of manuscripts, which will be handled by a separate committee; profits to be returned to Śrīla Prabhupāda."

So far my books are concerned, I am setting up a different body of management known as the BHAKTIVEDANTA BOOK TRUST. The trustees of this body are also members of the GBC, but their function is not dependent on the GBC.

ISKCON Press was created for the exclusive publication of my books and literatures and should be continued in that way.

During my absence no one shall live in my apartment.

At the World Head Quarters