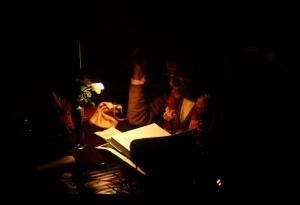 Prabhupāda: Vaisnava Gentlemen and Mothers, You all by your mercy have respected me for that I am very grateful to you. I do not have any qualification, but by God's grace, By Guru's and Vaiṣṇava's grace, in the age of seventy years, I went to New York, United States of America, By God's inspiration my Guru Mahārāja who was the acharya of the Gaudiya Vaiṣṇava Sampradāya Śrīmad Bhaktisiddhānta Sarasvatī Gosvāmī Prabhupāda, his intense desire was that in western countries, Śrī Caitanya Mahāprabhu's words, be preached very nicely. In this topic his efforts were very serious and my God brothers were also trying, but they could not achieve any special success, that is why at the age of seventy years, here in Vṛndāvana, at your lotus feet, I was staying at Radha Damodar temple and by God's inspiration, I thought of going to America, and before going there, by God's grace, I started writing commentary on Śrīmad-Bhāgvatam in English, In this Radha Damodar temple I used to sit and write and then I used to go to Delhi and get it printed, Thus three cantos of Bhāgvatam were complete in 1965, at that time with great difficulty I went to America.

In order to acquire the passport and approving the P form there was lot of trouble, after arranging everything when I went to get the final P form in Mumbai, so there the officer Mr. Chakravarthy, he said Mahārāja you cannot go, why ? Because you are not invited by any organization, you are going on an invitation of some individual person, so this government will not let you go. So I requested him, that kindly take me to your supervisor, so that I can explain it to him, So at that time, the Chief controller of foreign exchange was Mr. Rao, I do not remember his complete name, the I went to his secretary and said that my file is lying here from a long time, kindly sent this to your boss, since I want to meet him, so that secretary immediately took that file and sent it to Mr. Rao and told me to have a seat. So I was sitting there, By God's grace that Mr. Rao came out personally and said Swamiji I will approve your request don’t worry about it.

So this is also God's grace, then the proprietor of Scindia Steel Navigation company Managing director Śrīmatī Sumati, I requested her, so the special room that is there in the ship, I went in ship only before, I did not have money to go in an airplane, So she gave me a return ticket for free and gave special instruction to the captain, that take care of all the needs of Swamiji and captain Mr. Pandya, with great care especially his wife, with great faith she served me in the ship, in that also, I had lot of trouble, two days I felt like I was dying, then by God's grace, I came to know that Lord Śrī Kṛṣṇa himself is controlling the ship and he will definitely make me reach the destination . So by what inspiration I went there I am describing the history in summary. In 1922 in Calcutta in a very big chemical laboratory I was a manager, at that time my age was 24 to 25 very young, So one of my friends informed me that nearby one Gaudiya Matha has opened and I have heard that there are very big big Vaiṣṇava saints there, so kindly come with me. So at that time, I was very young and especially at that time I was a devotee of Congress, My birth was in a Vaiṣṇava Family, my father was a great Vaiṣṇava, so from birth I was in Vaiṣṇava culture only, but just like, by acquiring todays knowledge, most of the devotees become impersonalist, I also for some days became like that, then my friend introduced me to Bhaktisiddhānta Sarasvatī Gosvāmī Prabhupāda.

Bhaktisiddhānta Sarasvatī Gosvāmī, after seeing me, said that you all are learned then why don’t you preach the teaching of Caitanya Mahāprabhu in foreign countries, On this I argued with him, I said we are dependent country, who will listen to us?. Then Guru Mahārāja, my first meeting, my actual connection was not there with the Guru, but ultimately he was Guru, he argued with me and very nicely explained to me and I was defeated also. So my his mercy, in the first meeting only his words where that, you should go to the foreign countries and try to spread Caitanya Mahāprabhu's thoughts that is bhakti, knowledge, then at the end of his life in 1936, he wrote me a letter, fifteen days before his disappearance, that you preach in English, in this you will be benefitted and even the world will be benefitted, in this way I was inspired by my Guru Maharaja all the time, but because of my incompetence, from 1922 until 1965, I was just planning, I did not get any chance, by some reason or the other, then By God's mercy, by following the instructions of Guru Mahārāja, I reached New York, like I mentioned there I just had forty rupees, not fifty, but forty rupees. And in New York, to spend two dollars is a matter of one or two hours, and the conversion of dollar is two dollars as per todays calculation is twenty rupees, So there was no support, but by God's grace, In town called Butler one of my friends from Agra had his son living there, he came and took me with him, I stayed there for ten to fifteen days, he had married a American girl and he was a gentleman, after that I came to New York, In New York, I had rented a room, I did not have money, by selling books somehow or other I was managing, everything was stolen from there, my typewriter, tape recorder, my books all these things were stolen.

In New York also there is stealing (devotees laugh), So thieves are all over the place (devotees laugh). So everything was stolen, then one of my disciples he took me to his house, there I lived for some days, in this way I had to take troubles for one year, sometimes here, sometimes there, no fixed place, nothing fixed about eating, living, there was no money, I had taken some books, Śrīmad-Bhāgvatam, after that, somehow or other since I had 200 dollars, I took a small storefront on rent, it is called storefront there, in that storefront, I started meetings, three, four, five all these children use to come, no old people, there young people are very enthusiastic, they want something, by watching their mother and father, they were assured that there is no happiness in this, that is why you know that in America, there are many hippies, children from big big rich people's houses, but they do not want things to be life that . . . (end)