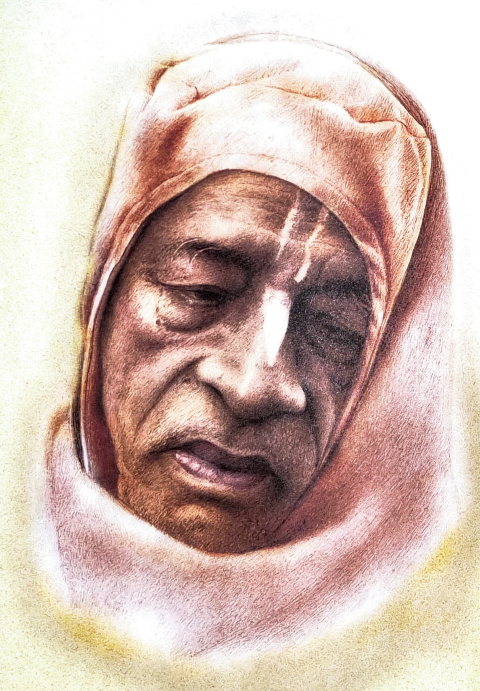 1) O Srila Prabhupada! You personally suffer to see the suffering of the fallen conditioned souls. On this anniversary of your separation I am utterly despondent.

2) "The ocean of mercy was previously held back by a dam, but Lord Nityananda personally cut a channel in it and thereby released the outpouring flood of pure ecstatic love of God. " ( from Locana's dasa's song Nitai Guna mani)

3) Those devotees to whom the responsibility was given to continue spreading this flood of love somehow became overpowered by Maya and were thus reduced to simply performing ritualistic Hindu ceremonies for the benefit of the materialists.

4) Lord Nityananda's inundation of prema was thus completely stopped by those known as jati-gosai (caste gosvamis) But then you personally came, O Master to open wide the floodgates once again.

5) Again you engulfed everyone in the deluge of pure divine love—even such a low, wretched, fallen and sinful soul as myself.

6) On the strength of Lord Caitanya Mahaprabhu's command you sent all of your servants as spiritual masters, going from door to door, just to deliver the fallen souls.

7) The devotees were enthusiastically preaching everywhere—from the oceans to the Himalaya mountains, But now that you have gone from our midst everything today has become very dark.

Second Octet
The Merciful Flood Has Been Stopped

1) Just as Advaita Prabhu had prayed fervently and thus induced Sri Gauranga to descend, so did your father, Bhaktivinoda Thakura, pray for you to incarnate.

2) Due to Bhaktivinoda's eagerness, O Master, you came and proclaimed to everyone that India is the most holy land of the Lord's divine pastimes.

3) "One who has taken birth in this land of Bharata-bhumi (India) should first make his own life successful and then work for the benefit of all other people" (CC Adi 9.41)

4) This is the most significant message of Lord Caitanya that you boldly preached everywhere. But now in your absence, O Master, everything has fallen into darkness.

5) The overflowing ocean of your compassion has once again been dammed up. This makes me feel as if a spear of great misery has indeed pierced my heart.

6) Without Caitanya Mahaprabhu's message being spread there is only confusion and upheaval in the movement. Seeing this situation, all the Vaisnavas are also feeling overwhelmed with the pangs of your separation.

7) The spirit souls have once again been captured by Maya and plunged into absolute darkness. Desperately searching for relief, they are simply perishing in a fathomless ocean of anxiety.

1) You instructed everyone you met to chant the holy name of Lord Krsna. You showed the example of continually reciting the maha-mantra into their ears.

2) You empowered everyone with the qualification to further distribute that holy name But now, by the influence of Maya, there is only darkness on all sides.

3) The souls who are truly attached to worshiping the Lord always sing and dance in joyful sankirtana. Following in the footsteps of their spiritual master, they deliver the whole world.

4) But those who have no such qualification perform nirjana bhajana or so-called confidential worship in a solitary place. Thus acting whimsically, all of them actually remain absorbed in personal sense gratification.

5) (As stated in the Srimad Bhagavatam 10.33.30): "An ordinary soul should never imitate the activities of the Supreme Lord, even in his mind." According to these instructions in devotional service, the unqualified imitators are ruined.

6) You preached "utility is the principle"—that is, one should act without attachment and use anything that is deemed appropriate in the devotional service of the Lord.

7) In such detached devotional service to Lord Krsna there would be a temple established in every house But now just the opposite situation is apparent everywhere.

1) Everything regarding material prosperity as well as mystic perfection is fully present in your transcendental message: "Because the residents of Vraja have life, therefore they engage in preaching work." (Dusta Mana verse)

2) The "resolute intelligence" ("vyavasayatmika buddhi") explained by Srila Visvanatha Cakravarti (in his commentary to Bhagavad Gita 2.41) is now spoiled since your disciples have become ensnared in the bewildering noose of Maya.

3) Those disciples who were irresolute in performing devotional service according to your instructions have now divided your mission in many factions. It appears that the tigress of ambition for material names and fame has appeared and personally provoked this upheaval.

4) The essential purport of your message obviously did not enter their ears. O where will I get the strength to perform this hari-nama-sankirtana?

5) To chant the holy name of the Lord is the explicit command of my worshipful spiritual master. I could never honestly neglect that order

6) Your greatest acclaim is that you propagated the topmost religious culture Anyone who accepts the holy name from you becomes spiritually qualified.

7) If all those who attained this qualification were to go out and make disciples then the miserable conditioned souls would all be delivered from this world of birth and death.

2) Your so-called disciple, the jackal named Ananta Vasudeva, disobeyed your final instructions to keep the mission united, and thereby created a scandalous fiasco. The result of this philosophical deviation is evident to this day as imitative sahajiyas are being worshiped as gurus in your temples.

3) Is there a single temple to be found where your instructions are still being followed? As it is said: "punar musiko bhava"—Everyone has "again become a mouse."

4) The lion's food has been stolen away by the deceptive tricks of the jackal Now caught in Maya's mighty clutches everyone is reduced to wailing and weeping.

5) O Master! If your are merciful to us one again, then even though we are trapped here on the shores of the ocean of death, we will finally behold a change for the better.

6) Then once again we can blissfully remember the holy name of Krsna, and once again we will have firm faith in your "Vaikuntha messages."

7) Once again you will make us dance in the pure holy name of Krsna. thus you will personally dispel all this confusion caused by Maya.

1) "Continue dancing, singing and performing sankirtana in the association of devotees." (CC Adi 7.92) These words spoken by Sri Caitanya Mahaprabhu are especially nectarine.

2) If we have complete faith in these instructions given by you, our spiritual master, then in the performance of sankirtana actual love for Krsna will be aroused in us.

3) Without love of God, our tiny intelligence only becomes entangled in the network of Maya's delusions Because no one actually attained prema, now there has been great upheaval in your mission.

4) The whole world has become filled with impersonalists, and the Vaisnavas have given up the work of preaching that was entrusted unto them and have simply gone off to perform solitary worship.

5) The Vaisnava's were famous as "patita pavana" (deliverers of the fallen) but now this title has fallen into disgrace. Countless numbers of your disciples have been forced to leave your movement.

6) At such an inauspicious time, O Master, what can be done to repair the damage that is done? The beautiful garden that you had so carefully planted is now parched and withered away.

7) O Master, please awaken some good intelligence in this insignificant disciple of yours so that my firm faith in your transcendental message may increase more and more.

1) The most magnanimous incarnation of the Lord is Sri Krsna Caitanya. Distributing the process of attaining love of God by chanting the holy names of Krsna, He thus blessed the entire universe.

2) O Master, you are the personification of the transcendental message of Lord Caitanya. You are the distributor of that message to every town and village.

3) You sent your devotees to preach in the faraway lands of the Western countries, and you personally traveled all over India, even to the South.

4) You preached the pure philosophy of Lord Gauranga in such a way that intelligent persons could understand. And you showed such great concern, O Master, in convincing all you adversaries!

5) Lord Gauranga used many tricks just to engage the conditioned souls in devotional service, and you have also understood how to use all those tricks perfectly well.

6) You understood time, place and circumstance, and utilized everything as a strategy for preaching. Although observing your activities with their very eyes. those who are blind like owls and other creatures of the night could not see your true purpose.

Eighth Octet
If Only You would Come Again

1) Lord Caitanya's method of devotional service is not performed in solitude. You preached this again and again to your own devotees.

2) Just as the Lord delivered Jagai and Madhai out of His own causeless mercy, you explained to everyone that this same method of preaching work has to go on.

3) The world has now filled up with many Jagais and Madhais to deliver. Everyone is anxiously looking down the road waiting for Caitanya-Nitai to come to their rescue.

4) If, at such a time as this, you were to personally return to this world and once more preach about all these things the way you always used to do

5) If there were enthusiastic preaching activities again taking place in every direction, then all the people as before would be stirred up in blissful excitement.

6) Your profound shouting would cause the demons and atheists to flee, and your narrations of Lord Caitanya's message would fill the hearts of the innocent souls.

7) Again the whole world would be excitedly bustling with good tidings; but as it is, in your absence now there is nothing of value anywhere.

9) O Master! My heart is broken in your absence. This disciple named Abhay has hereby revealed only a small token of his wretched agony of separation.