660713 - Certificate of Incorporation of ISKCON

Constitution of Association - Direction of Management 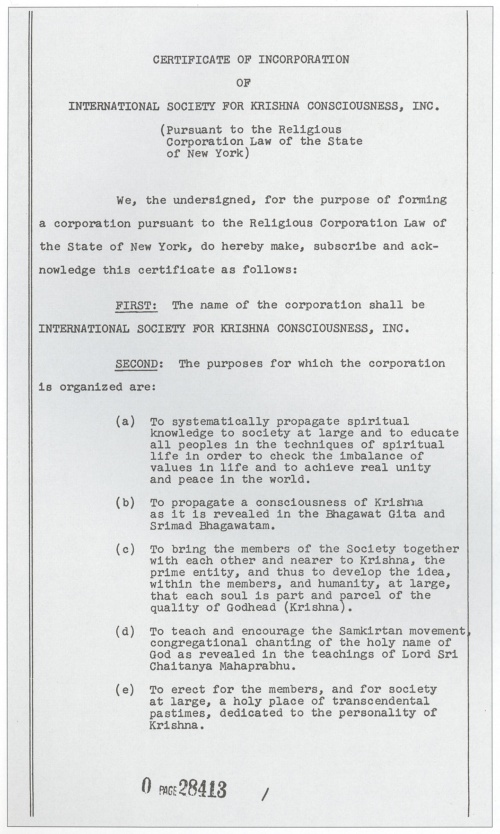 CERTIFICATE OF INCORPORATION
OF
INTERNATIONAL SOCIETY FOR KRISHNA CONSCIOUSNESS, INC.

We, the undersigned, for the purpose of forming a corporation pursuant to the Religious Corporation Law of the State of New York, do hereby make, subscribe and acknowledge this certificate as follows:

FIRST: The name of the corporation shall be INTERNATIONAL SOCIETY FOR KRISHNA CONSCIOUSNESS, INC.

SECOND: The purposes for which the corporation is organized are:

(a) To systematically propagate spiritual knowledge to society at large and to educate all peoples in the techniques of spiritual life in order to check the imbalance of values in life and to achieve real unity and peace in the world.

(b) To propagate a consciousness of Krishna as it is revealed in the Bhagawat Gita and Srimad Bhagawatam.

(c) To bring the members of the Society together with each other and nearer to Krishna, the prime entity, and thus to develop the idea, within the members, and humanity, at largo, that each soul is part and parcel of the quality of Godhead (Krishna).

(d), To teach and encourage the Samkirtan movement congregational chanting of the holy name of God as revealed in the teachings of Lord Sri Chaitanya Mahaprabhu.

(e), To erect for the members, and for society at large, a holy place of transcendental pastimes, dedicated to the personality of Krishna. 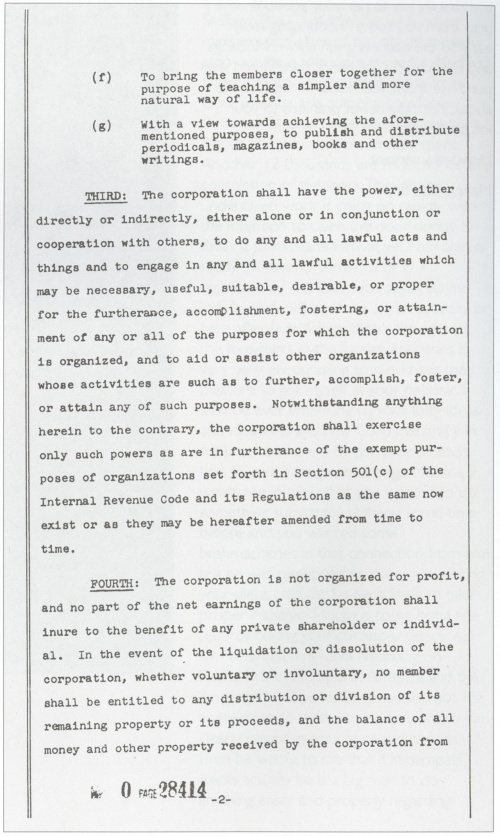 (f) To bring the members closer together for the purpose of teaching a simpler and more natural way of life.

(g) With a view towards achieving the aforementioned purposes, to publish and distribute periodicals, magazines, books and other writings.

THIRD: The corporation shall have the power, either directly or indirectly, either alone or in conjunction or cooperation with others, to do any and all lawful acts and things and to engage in any and all lawful activities which may be necessary, useful, suitable, desirable, or proper for the furtherance, accomplishment, fostering, or attainment of any or all of the purposes for which the corporation is organized, and to aid or assist other organizations whose activities are such as to further, accomplish, foster, or attain any of such purposes. Notwithstanding anything herein to the contrary, the corporation shall exercise only such powers as are in furtherance of the exempt purposes of organizations set forth in Section 501(c) of the Internal Revenue Code and its Regulations as the same now exist or as they may be hereafter amended from time to time.

FOURTH: The corporation is not organized for profit, and no part of the net earnings of the corporation shall inure to the benefit of any private shareholder or individual. In the event of the liquidation or dissolution of the corporation, whether voluntary or involuntary, no member shall be entitled to any distribution or division of its remaining property or its proceeds, and the balance of all money and other property received by the corporation from any source, after the payment of all debts and obligations of the corporation, shall be used or distributed, subject to the order of the Supreme Court of the State of New York as provided by law, exclusively for purposes within those set forth in Article SECOND of this certificate and within the intendment of Section 501(c) of the Internal Revenue Code of 1954 and its Regulations as the same now exist or as they may be hereafter amended from time to time. 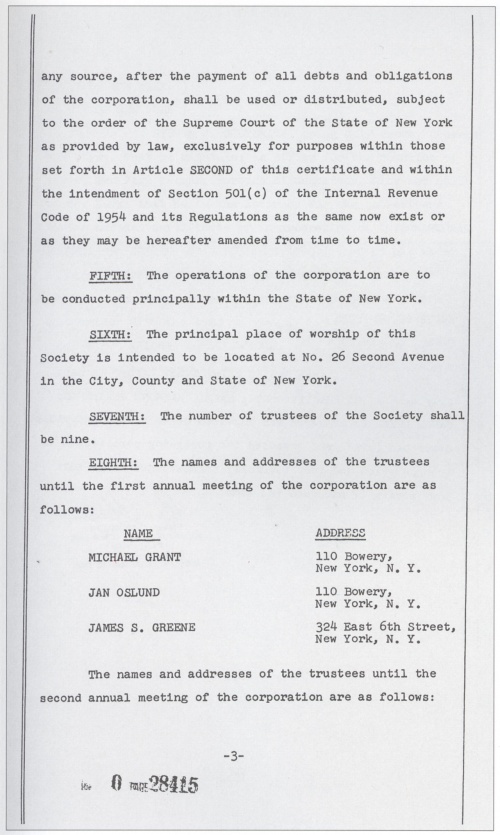 FIFTH: The operations of the corporation are to be conducted principally within the State of New York.

SIXTH: The principal place of worship of this Society is intended to be located at No. 26 Second Avenue in the City, County and State of New York.

SEVENTH: The number of trustees of the Society shall be nine.

EIGHTH: The names and addresses of the trustees until the first annual meeting of the corporation are as follows:

The names and addresses of the trustees until the second annual meeting of the corporation are as follows: 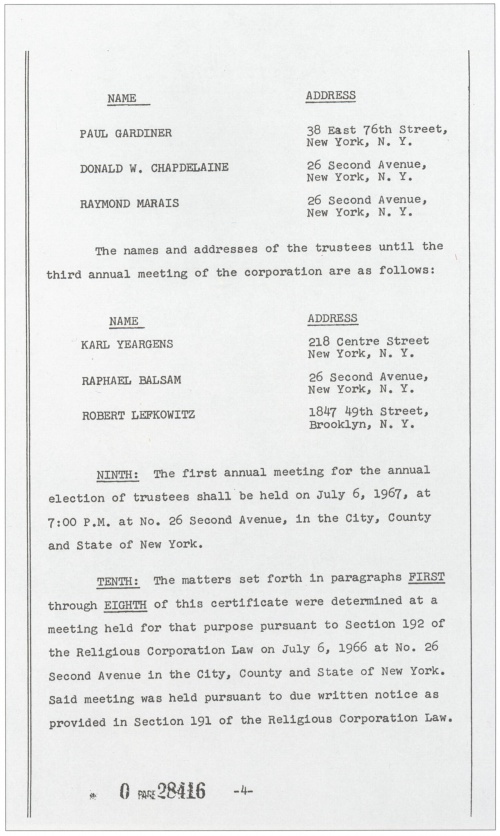 The names and addresses of the trustees until the third annual meeting of the corporation are as follows:

TENTH: The matters set forth in paragraphs FIRST through EIGHTH of this certificate were determined at a meeting held for that purpose pursuant to Section 192 of the Religious Corporation Law on July 6, 1966 at No. 26 Second Avenue in the City, County and State of New York. Said meeting was held pursuant to due written notice as provided in Section 191 of the Religious Corporation Law. 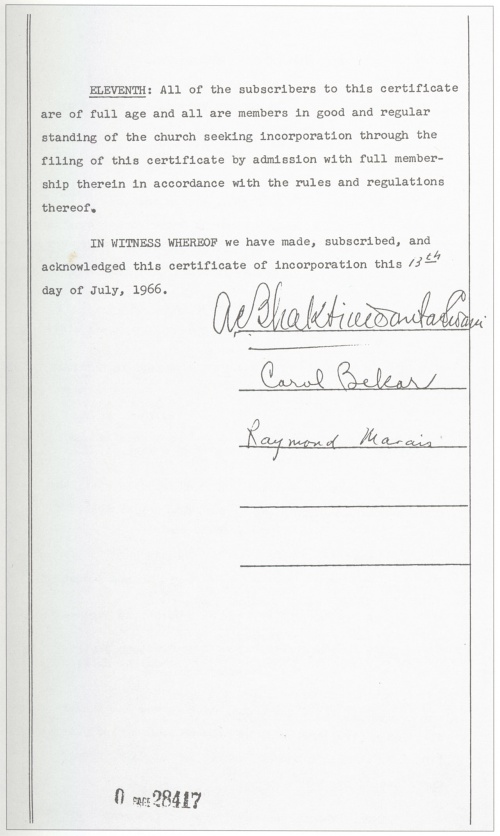 ELEVENTH: All of the subscribers to this certificate are of full age and all are members in good and regular standing of the church seeking incorporation through the filing of this certificate by admission with full membership therein in accordance with the rules and regulations thereof.

IN WITNESS WHEREOF we have made, subscribed, and acknowledged this certificate of incorporation this 13th day of July, 1966. 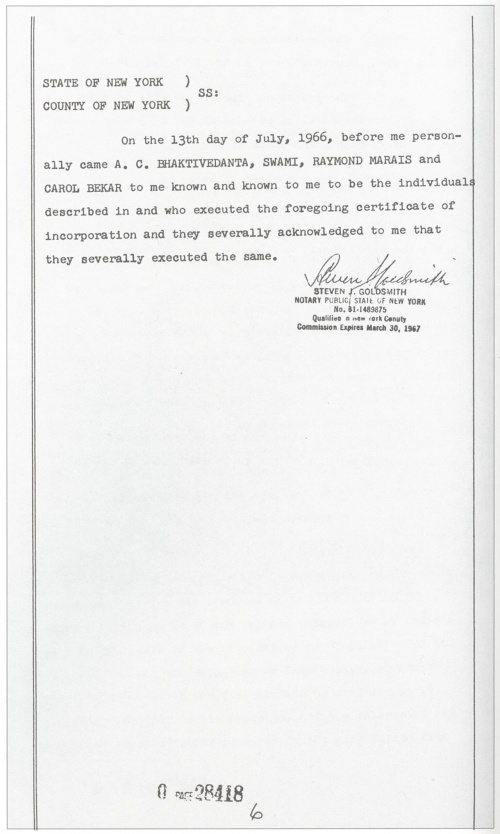 On the 13th day of July, 1966 before me personally came A. C. BHAKTIVEDANTA, SWAMI, RAYMOND MARAIS and CAROL BEKAR to me known and known to me to be the individuals described in and who executed the foregoing certificate of incorporation and they severally acknowledged to me that they severally executed the same. 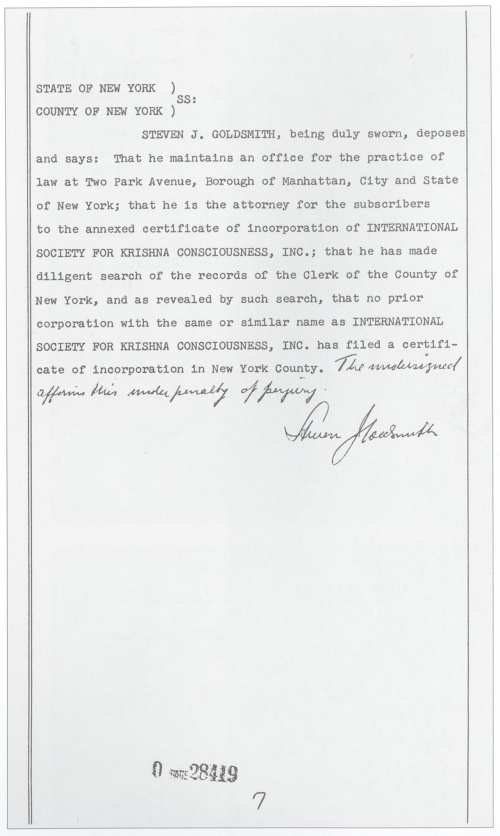 STEVEN J. GOLDSMITH, being duly sworn, deposes and says: That he maintains an office for the practice of law at Two Park Avenue, Borough of Manhattan, City and State of New York; that he is the attorney for the subscribers to the annexed certificate of incorporation of INTERNATIONAL SOCIETY FOR KRISHNA CONSCIOUSNESS, INC.; that he has made diligent search of the records of the Clerk of the County of New York, and as revealed by such search, that no prior corporation with the same or similar name as INTERNATIONAL SOCIETY FOR KRISHNA CONSCIOUSNESS, INC. has filed a certificate of incorporation in New York County.

[handwritten:] The undersigned affirms this made under penalty of perjury.

Certificate of Incorporation of ISKCON

Constitution of Association - Direction of Management