The League of Devotees Prospectus - Certificate of Incorporation of ISKCON 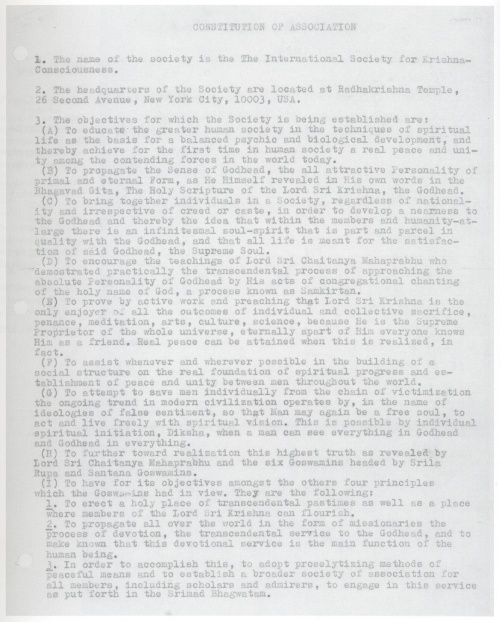 1. The name of the society is The International Society for Krishna Consciousness.

2. The headquarters of the Society are located at Radhakrishna Temple, 26 Second Avenue, New York City, 10003, USA.

3. The objectives for which the Society is being established are:

(A) To educate the greater human society in the techniques of spiritual life as the basis for a balanced psychic and biological development, and thereby achieve for the first time in human society a real peace and unity among the contending forces in the world today.

(B) To propagate the Sense of Godhead, the all attractive Personality of primal and eternal Form, as He Himself revealed in His own words in the Bhagavad Gītā, the Holy Scripture of the Lord Sri Krishna, the Godhead.

(C) To bring together individals in a Society, regardless of nationality and irrespective of creed or caste, in order to develop a nearness to the Godhead and thereby the idea that within the members and humanity-at-large there is an infinitesimal soul-spirit that is part and parcel in quality with the Godhead, and that all life is meant for the satisfaction of said Godhead, the Supreme Soul.

(D) To encourage the teachings of Lord Sri Chaitanya Mahaprabhu who demonstrated practically the transcendental process of approaching the absolute Personality of Godhead by His acts of congregational chanting of the holy name of God, a process known as Samkirtan.

(E) To prove by active work and preaching that Lord Sri Krishna is the only enjoyer of all the outcomes of individual and collective sacrifice, penance, meditation, arts, culture, science, because He is the Supreme Proprietor of the whole universe, eternally apart of Him everyone knows Him as a friend. Real peace can be attained when this is realized, in fact.

(F) To assist whenever and wherever possible in the building of a social structure on the real foundation of spiritual progress and establishment of peace and unity between men throughout the world.

(G) To attempt to save men individually from the chain of victimization the ongoing trend in modern civilization operates by, in the name of ideologies of false sentiment, so that Man may again be a free soul, to act and live freely with spiritual vision. This is possible by individual spiritual initiation, Diksha, when a man can see everything in Godhead and Godhead in everything.

(H) To further toward realization this highest truth as revealed by Lord Sri Chaitanya Mahaprabhu and the six Goswamins headed by Śrīla Rupa and Sanatana Goswamins.

(I) To have for its objectives amongst the others four principles which the Goswamins had in view. They are the following:

1. To erect a holy place of transcendental pastimes as well as a place where members of the Lord Sri Krishna can flourish.

2. To propagate all over the world in the form of missionaries the process of devotion, the transcendental service to the Godhead, and to make known that this devotional service is the main function of the human being.

3. In order to accomplish this, to adopt proselytizing methods of peaceful means and to establish a broader society of association for all members, including scholars and admirers, to engage in this service as put forth in the Śrīmad Bhagwatam. 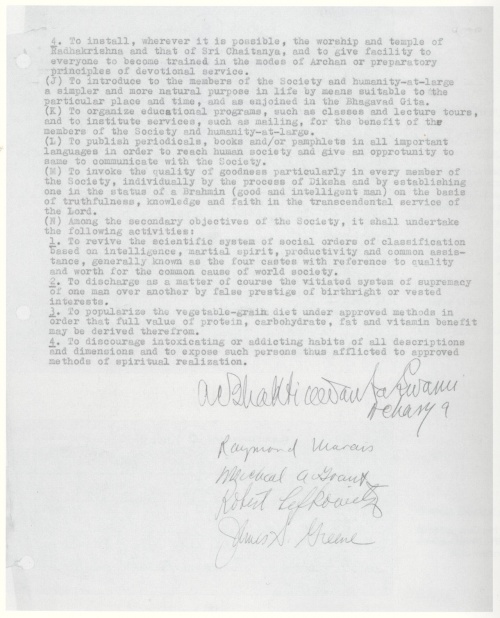 4. To install, wherever it is possible, the worship and temple of Radhakrishna and that of Sri Chaitanya, and to give facility to everyone to become trained in the modes of Archan or preparatory principles of devotional service.

(J) To introduce to the members of the Society and humanity-at-large a simpler and more natural purpose in life by means suitable to the particular place and time, and as enjoined in the Bhagavad Gītā.

(K) To organize educational programs, such as classes and lecture tours, and to institute services, such as mailing, for the benefit of the members of the Society and humanity-at-large.

(L) To publish periodicals, books and/or pamphlets in all important languages in order to reach human society and give an opportunity to same to communicate with the Society.

(M) To invoke the quality of goodness particularly in every member of the Society, individually by the process of Diksha and by establishing one in the status of a Brahmin (good and intelligent man) on the basis of truthfulness, knowledge and faith in the transcendental service of the Lord.

(N) Among the secondary objectives of the Society, it shall undertake the following activities:

1. To revive the scientific system of social orders of classification based on intelligence, martial spirit, productivity and common assistance, generally known as the four castes with reference to quality and worth for the common cause of world society.

2. To discharge as a matter of course the vitiated system of supremacy of one man over another by false prestige of birthright or vested interests.

3. To popularize the vegetable-grain diet under approved methods in order that full value of protein, carbohydrate, fat and vitamin benefit may be derived therefrom.

4. To discourage intoxicating or addicting habits of all descriptions and dimensions and to expose such persons thus afflicted to approved methods of spiritual realization.

The League of Devotees Prospectus - Certificate of Incorporation of ISKCON