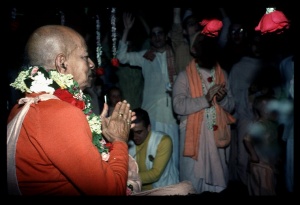 We had the good fortune of participating in 'association with pure devotees', with Śrīla Bhaktisiddhānta Sarasvatī, and by discussion of his transcendental words, we have been able to do all this service. I have no qualification of my own. People say that, "You have done wonders." Perhaps, it is so. However, my response to them is that, I am not a magician. I am not a yogi. I have no special intellectual capability.

The only thing I can say is that I do not indulge in concoction. This much I can take credit for, that what I've heard from disciple succession, I only repeat that. That is all. No falsity. That is perhaps why, by their mercy, all this has been possible. What is the difficulty? Our Acyutānanda Swami was saying, "Research." For devotion to Kṛṣṇa, what research needs to be done? Everything is already there. What intelligence do I have to research?

The Supreme Lord says, "man-manā bhava mad-bhakto, mad-yājī māṁ namaskuru" (BG 9.34) Four things. Always think of Me. What is the difficulty in that? We chant Hare Kṛṣṇa, if we always think of Kṛṣṇa, where is the cost, what is the loss? Nothing. But we do not want to do it. Dog’s obstinacy . . . will not do it. If we do, immediately it will happen . . . the Supreme Person is saying, man-manā bhava mad-bhakto . . . "Always think of Me." Even a child can do this. To do this, one does not need to learn Sanskrit, nor be a learned scholar.

The most important thing is devotion, not luci-puri. Devotion. When it is offered with devotion, the Supreme Person is willing to accept. Immediately. "Tad aham . . .aśnāmi" . . . "I eat." The one whose hands the Supreme Person is eating out of, what more is needed? What can be a greater blessing? There is nothing more to research. (?) That is why, we have named Bhagavad-gītā As It Is. As it is. No concoction. There are many big, big scholars writing Bhagavad-gītā, but actually, it is all concoction.

Someone is saying that Pāṇḍavas means the five senses, Kurukṣetra means the body. Someone saying, "The Supreme Person says that "man-manā bhava mad-bhakto" . . . that is not Kṛṣṇa, it is what is within Kṛṣṇa," and that he knows what is within Kṛṣṇa. These foolish people do not know Kṛṣṇa and what is within Kṛṣṇa, there is nothing separate, it is non-different. Such foolish people, and they are writing Bhagavad-gītā's 'teetha' (Bengali translation not found). They do not know 'adyaya-gyani' Kṛṣṇa (Bengali translation not found), they do not know Him, they do not understand Him, they have the audacity to write a commentary on the Bhagavad-gītā.

You all will be relieved to learn that our Bhagavad-gītā As It Is, is selling in large numbers. We have just had the first edition printed. Earlier, the abridged edition was printed. Last August, the un-abridged edition was printed. So, August, September, October, November, December, January, February, and now it is March . . . in these seven or eight months, one lakh books have been sold . . . in seven or eight months. The McMillan Company (publisher) has said that we have to wait until July for the next supply because there is no stock. The McMillan company's trade manager has himself written that the sale of our Bhagavad-gītā As It Is constantly increasing, and the other editions are decreasing.

This is reality, and this is our success because we do not concoct. This is what I have taught them (my disciples) . . . you heard them speak . . . they only repeat what they have heard through the disciplic succession, and through this they are experiencing love for devotional service. Have you noticed this about them (my disciples)? They are all very young girls. Four year back, they were indulging in all kinds of wild activities that would not be appropriate to mention here. This girl, Kauśalyā, I brought her from Honolulu. The poor girl used to offer her obeisances to me. She had a dehydrated face and would roam the streets alone. I told her, "You come along with us." I gave her initiation, and got her married. Now she worships the deities very nicely.

We have within us, that we desire pure devotion and want to distribute pure devotion to everyone. The only qualification we have is a good feeling towards everyone, and nothing else. We do not know Sanskrit, neither are we paṇditas. (Śrīla Prabhupāda quotes a Bengali proverb. Meaning yet unknown.).

All you Vaiṣṇavas have received them graciously. Please bless them. Another thing that I must say is that Mahāprabhu said, "bhārata-bhūmite haila manuṣya-janma yāra, janma sārthaka kari kara para-upakāra" (Sri Caitanya Caritamrta 9.41).

So the real 'good to others', in Mahāprabhu's words, there is no bigger 'good to others' than this. To uplift the living entity to its constitutional position. The Bhāgavatam states, "parābhavas tāvad abodha-jāto, yāvan na jijñāsata ātma-tattvam" (Śrīmad-Bhāgavatam 5.5.5). They are trying to understand their spiritual identity. That is the most important thing. "jīvera svarūpa haya nitya kṛṣṇa-dāsa" (Caitanya-caritāmṛta Madhya 20.108-109)

We are teaching them how to achieve eternal perfection of love for Kṛṣṇa, through the process taught by Mahāprabhu and the Supreme Person in the Bhagavad-gītā. They are being taught, and we are trying . . . and another thing . . . Mahāprabhu has said, "bhārata-bhūmite haila manuṣya-janma yāra, janma sārthaka kari kara para-upakāra". This was the duty and responsibility of those born in India. That duty still remains. It is not finished. How much have we achieved?

Just by starting hundred or two hundred temples and centres, does that mean all the towns and villages of this planet are over? There are so many more. (Inaudible) Each and every person who have taken a vow to preach Mahaprabhu's message, it is their duty. It is a must for everyone. There is a huge demand. I can tell you that there a many people in want of this. Those who have been unable to derive satisfaction and peace from the material existence. Now, the reality . . . "athāto brahma jijñāsā" (Vedānta-sūtra 1.1.1). This is their condition now.

Now there is a need for thousands of people of our country to go (overseas). That is going to increase India's honour. They will understand and appreciate the value of what they receive from India. If Indians go the to become beggars of jobs in technology, they are going to remain beggars and they will never gain respect. India has the reputation of being a poor country. Where ever we go, we hear, "Oh India! Very poor country." This is our certificate. It is actually so. All our ministers go overseas to beg, "Give me rice, give me lentils. Give me milk powder. Give money, give loan. We are going to enjoy ourselves and open liquor stores."

The reality of this world is very bad. Particularly India. Therefore, other than this Kṛṣṇa consciousness movement, there is nothing auspicious. Everywhere, we say this emphatically, we saying the same here. To all of you present here to please accept this Kṛṣṇa consciousness movement very seriously. That will be auspicious for the planet. It will be auspicious for the person propagating it.

This is Caitanya Mahāprabhu's blessing and benediction. "āmāra ājñāya guru hañā tāra' ei deśa" (Caitanya-caritāmṛta Madhya 7.128) His instruction. By following and propagating His instruction, one can become guru. To become guru is not difficult. But if one starts changing the instruction, adding one’s own concoction, then one becomes a cow, not guru. Without any concoction, the actual instructions have to be presented exactly as received through the disciplic succession. No research institute is required to achieve this. Simple intelligence is enough. It only needs to be executed. By establishing a institute with vested interests is useless. Useless. This needs to be understood. I can give you proof about that.

I have grown old. I am not going to live long. I trust and depend on these boys. Boys and girls. They are best. It is because of their co-operation and contribution that we have been able to spread so quickly . . .all over the planet. Starting from Norway, Sweden up to Australia, New Zealand . . . North and South, and all over. We are trying. All you gurus and Vaiṣṇavas, you have supported us. Please bless us more, so that we can preach this all over the world. For auspiciousness of the world. This is my prayer to you.

(Śrīla Prabhupāda speaks to a devotee – some parts inaudible)

Śrīla Prabhupāda: Yes. Where is it? Where have the kirtan people gone? Have they left?

Yes? Hmm. Okay. Kirtan..there is no? All right. Begin kirtan.