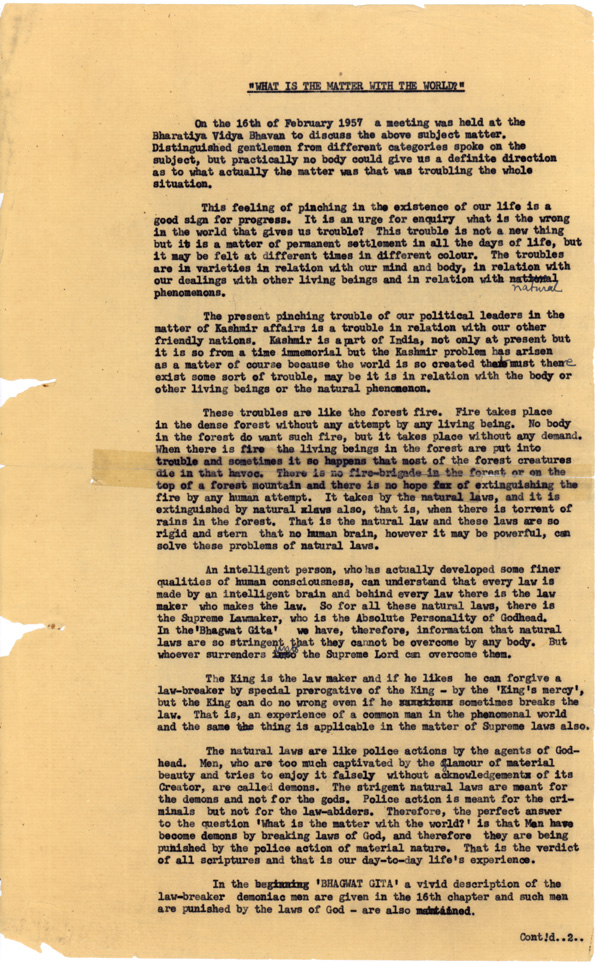 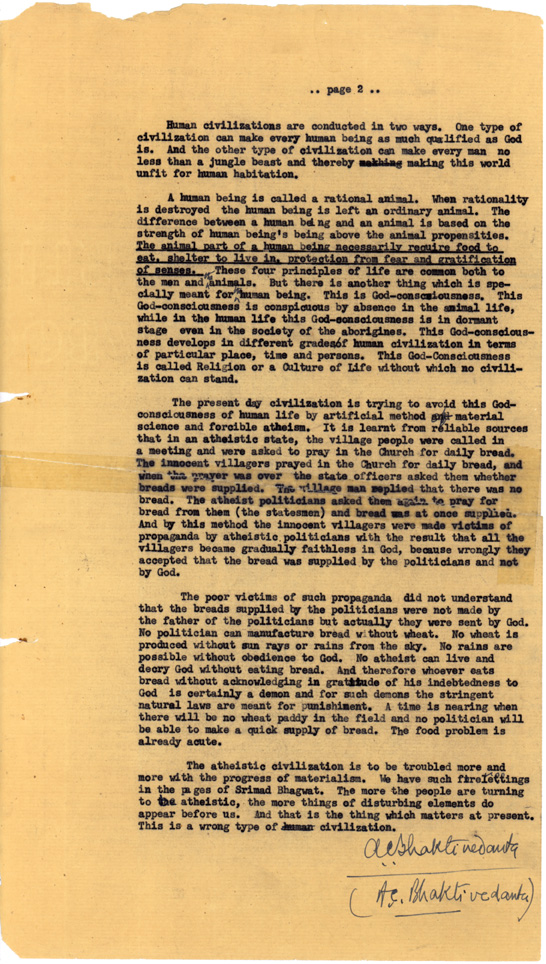 "WHAT IS THE MATTER WITH THE WORLD?"

On the 16th of February 1957 a meeting was held at the Bharatiya Vidya Bhavan to discuss the above subject matter. Distinguished gentlemen from different categories spoke on the subject, but practically nobody could give us a definite direction as to what actually the matter was that was troubling the whole situation.

This feeling of pinching in the existence of our life is a good sign for progress. It is an urge for enquiry what is the wrong in the world that gives us trouble? This trouble is not a new thing but it is a matter of permanent settlement in all the days of life, but it may be felt at different times in different colour. The troubles are in varieties in relation with our mind and body, in relation with our dealings with other living beings and in relation with natural phenomenons.

The present pinching trouble of our political leaders in the matter of Kashmir affairs is a trouble in relation with our other friendly nations. Kashmir is a part of India, not only at present but it is so from a time immemorial but the Kashmir problem has arisen as a matter of course because the world is so created that must there exist some sort of trouble, may be it is in relation with the body or other living beings or the natural phenomenon.

These troubles are like the forest fire. Fire takes place in the dense forest without any attempt by any living being. Nobody in the forest do want such fire, but it takes place without any demand. When there is fire, the living beings in the forest are put into trouble and sometimes it so happens that most of the forest creatures die in that havoc. There is no fire brigade in the forest or on the top of a forest mountain and there is no hope for of extinguishing the fire by any human attempt. It takes by the natural laws, and it is extinguished by natural laws also, that is, when there is torrent of rains in the forest. That is the natural law and these laws are so rigid and stern that no human brain, however it may be powerful, can solve these problems of natural laws.

An intelligent person, who has actually developed some finer qualities of human consciousness, can understand that every law is made by an intelligent brain and behind every law there is the lawmaker who makes the law. So for all these natural laws, there is the Supreme Lawmaker, who is the Absolute Personality of Godhead. In the Bhagavad-gītā we have, therefore, information that natural laws are so stringent that they cannot be overcome by anybody. But whoever surrenders unto the Supreme Lord can overcome them.

The king is the lawmaker and if he likes he can forgive a law-breaker by special prerogative of the king—by the 'king's mercy,' but the king can do no wrong even if he sometimes breaks the law. That is, an experience of a common man in the phenomenal world and the same thing is applicable in the matter of Supreme laws also.

The natural laws are like police actions by the agents of Godhead. Men, who are too much captivated by the glamour of material beauty and tries to enjoy it falsely without acknowledgement of its Creator, are called demons. The stringent natural laws are meant for the criminals but not for the law-abiders. Therefore, the perfect answer to the question "What is the matter with the world?" is that men have become demons by breaking laws of God, and therefore they are being punished by the police action of material nature. That is the verdict of all scriptures and that is our day-to-day life's experience.

In the Bhagavad-gītā a vivid description of the law-breaker demoniac men are given in the 16th chapter and such men are punished by the laws of God—are also maintained.

The present day civilization is trying to avoid this God-consciousness of human life by artificial method of material science and forcible atheism. It is learnt from reliable sources that in an atheistic state, the village people were called in a meeting and were asked to pray in the church for daily bread. The innocent villagers prayed in the church for daily bread, and when the prayer was over the state officers asked them whether breads were supplied. The village men replied that there was no bread. The atheist politicians asked them again to pray for bread from them (the statesmen) and bread was at once supplied. And by this method the innocent villagers were made victims of propaganda by atheistic politicians with the result that all the villagers became gradually faithless in God, because wrongly they accepted that the bread was supplied by the politicians and not by God.

The poor victims of such propaganda did not understand that the breads supplied by the politicians were not made by the father of the politicians but actually they were sent by God. No politician can manufacture bread without wheat. No wheat is produced without sun rays or rains from the sky. No rains are possible without obedience to God. No atheist can live and decry God without eating bread. And therefore whoever eats bread without acknowledging in gratitude of his indebtedness to God is certainly a demon and for such demons the stringent natural laws are meant for punishment. A time is nearing when there will be no wheat paddy in the field and no politician will be able to make a quick supply of bread. The food problem is already acute.

The atheistic civilization is to be troubled more and more with the progress of materialism. We have such foretellings in the pages of Śrīmad-Bhāgavatam. The more the people are turning to the atheistic, the more things of disturbing elements do appear before us. And that is the thing which matters at present. This is a wrong type of civilization.