Founding Document for the BBT, USA - Srila Prabhupada's Declaration of Will 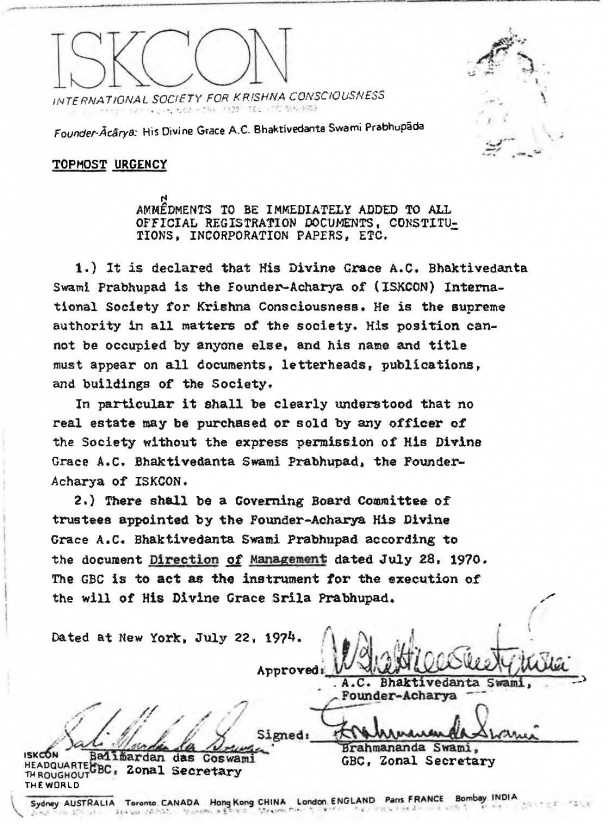 Amendments for official documents (page 1 of 1)

1.) It is declared that His Divine Grace A.C. Bhaktivedanta Swami Prabhupada is the Founder-Acharya of (ISKCON) International Society for Krishna Consciousness. He is the supreme authority in all matters of the society. His position cannot be occupied by anyone else, and his name and title must appear on all documents, letterheads, publications, and buildings of the Society.

In particular it shall be clearly understood that no real estate may be purchased or sold by any officer of the Society without the express permission of His Divine Grace A.C. Bhaktivedanta Swami Prabhupad, the Founder-Acharya of ISKCON.

2.) There shall be a Governing Board Committee of trustees appointed by the Founder-Acharya His Divine Grace A.C. Bhaktivedanta Swami Prabhupad according to the document Direction of Management dated July 28, 1970. The GBC is to act as the instrument for the execution of the will of His Divine Grace Srila Prabhupad.

Founding Document for the BBT, USA - Srila Prabhupada's Declaration of Will