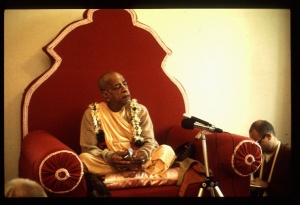 The duration of the material universe is limited. It is manifested in cycles of kalpas. A kalpa is a day of Brahmā, and one day of Brahmā consists of a thousand cycles of four yugas or ages: Satya, Tretā, Dvāpara, and Kali. The cycle of Satya is characterized by virtue, wisdom and religion, there being practically no ignorance and vice, and the yuga lasts 1,728,000 years. In the Tretā-yuga vice is introduced, and this yuga lasts 1,296,000 years. In the Dvāpara-yuga there is an even greater decline in virtue and religion, vice increasing, and this yuga lasts 864,000 years. And finally in Kali-yuga (the yuga we have now been experiencing over the past 5,000 years) there is an abundance of strife, ignorance, irreligion and vice, true virtue being practically nonexistent, and this yuga lasts 432,000 years. In Kali-yuga vice increases to such a point that at the termination of the yuga the Supreme Lord Himself appears as the Kalki avatara, vanquishes the demons, saves His devotees, and commences another Satya-yuga. Then the process is set rolling again. These four yugas, rotating a thousand times, comprise one day of Brahmā, the creator god, and the same number comprise one night. Brahmā lives one hundred of such "years" and then dies. These "hundred years" by earth calculations total to 311 trillion and 40 million earth years. By these calculations the life of Brahmā seems fantastic and interminable, but from the viewpoint of eternity it is as brief as a lightning flash. In the causal ocean there are innumerable Brahmās rising and disappearing like bubbles in the Atlantic. Brahmā and his creation are all part of the material universe, and therefore they are in constant flux.

In the material universe not even Brahmā is free from the process of birth, old age, disease and death. Brahmā, however, is directly engaged in the service of the Supreme Lord in the management of this universe—therefore he at once attains liberation. Elevated sannyāsīs are promoted to Brahmā's particular planet, Brahmaloka, which is the highest planet in the material universe and which survives all the heavenly planets in the upper strata of the planetary system, but in due course Brahmā and all inhabitants of Brahmaloka are subject to death, according to the law of material nature.