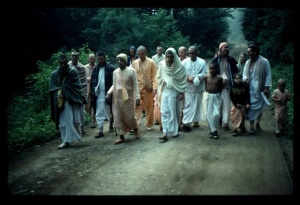 But what need is there, Arjuna, for all this detailed knowledge? With a single fragment of Myself I pervade and support this entire universe.

The Supreme Lord is represented throughout the entire material universes by His entering into all things as the Supersoul. The Lord here tells Arjuna that there is no point in understanding how things exist in their separate opulence and grandeur. He should know that all things are existing due to Kṛṣṇa's entering them as Supersoul. From Brahmā, the most gigantic entity, on down to the smallest ant, all are existing because the Lord has entered each and all and is sustaining them.

Worship of demigods is discouraged herein because even the greatest demigods like Brahmā and Śiva only represent part of the opulence of the Supreme Lord. He is the origin of everyone born, and no one is greater than Him. He is samatā, which means that no one is superior to Him and that no one is equal to Him. In the Viṣṇu-mantra it is said that one who considers the Supreme Lord Kṛṣṇa in the same category with demigods-be they even Brahmā or Śiva-becomes at once an atheist. If, however, one thoroughly studies the different descriptions of the opulences and expansions of Kṛṣṇa's energy, then one can understand without any doubt the position of Lord Śrī Kṛṣṇa and can fix his mind in the worship of Kṛṣṇa without deviation. The Lord is all-pervading by the expansion of His partial representation, the Supersoul, who enters into everything that is. Pure devotees, therefore, concentrate their minds in Kṛṣṇa consciousness in full devotional service; therefore they are always situated in the transcendental position. Devotional service and worship of Kṛṣṇa are very clearly indicated in this chapter in verses eight to eleven. That is the way of pure devotional service. How one can attain the highest devotional perfection of association with the Supreme Personality of Godhead has been thoroughly explained in this chapter.

Thus end the Bhaktivedanta Purports to the Tenth Chapter of the Śrīmad-Bhagavad-gītā in the matter of the Opulence of the Absolute.