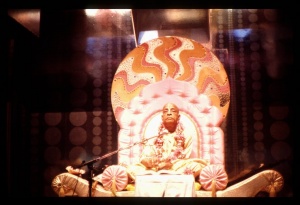 Viśvakarmā: Soon they will be able to sell it to us. (Prabhupāda laughs) Then we'll make a walkway across.

Indian (1): Where there's the cold, it is like a demoniac place, cold. Is it right?

Prabhupāda: Too warm, too cold, both are bad. (break)

Prabhupāda: (laughs) In India it is actually so. (break)

Śubhavilāsa: . . . land is getting the benefit by your lotus feet, very pious. (break)

Prabhupāda: Yes, if they work, they can do that. (break)

Puṣṭa Kṛṣṇa: In West Bengal they have huge quantities of rice surplus.

Hari-śauri: Could that be due to our saṅkīrtana activities?

Prabhupāda: Certainly. Bhavanti parjanyaḥ . . . parjanyād anna-sambhavaḥ (BG 3.14). There was big valley like this in Tokyo. We walked, and there was a creek like this. Not so dirty. (break)

Prabhupāda: . . . is sympathetic with this movement. Everyone wants godlessness. And this movement is preaching about God, so nobody likes us. (chuckles) (break)

Devotee: They've poisoned the lakes so much in Canada now that they've been making an attempt to turn rivers around in northern Ontario to flush the lakes out like a toilet, so they can flush the water down to cities like Chicago. (break) (laughter)

Prabhupāda: To save all these botherations. You live here? How long you'll live in Canada?

Devotee (2): How long will you live here?

Satsvarūpa: . . . the leaf movement. That movement is another watering of the leaf and branches instead of the root, to try to improve the lakes.

Prabhupāda: Yes. (break) . . . nābhijānāti mām ebhyaḥ paramam avyayam (BG 7.13). It has been published in the paper that we consider everyone a rascal, miscreant . . .

Prabhupāda: . . . who is not Kṛṣṇa conscious. That has been published. (laughter) You have seen it?

Viśvakarmā: Which paper was that?

Hari-śauri: The question was what was Prabhupāda's opinion about other gurus, like Guru Maharaj-ji and Maharishi Mahesh Yogi.

Puṣṭa Kṛṣṇa: So Prabhupāda replied that, "We are not interested in so-called other gurus. Simply we know this, that Kṛṣṇa says in the Bhagavad-gītā that persons who are not Kṛṣṇa conscious, they're either foolish, miscreants, sinful, lowest amongst mankind, or their knowledge is stolen by illusion." Unquote.

Puṣṭa Kṛṣṇa: The Los Angeles Times has a circulation of one and a half million daily. (break)

Prabhupāda: . . . recently I said all these so-called gurus are either rascals, miscreant, lowest of the mankind, or they have no knowledge. (chuckling) Not directly; indirectly.

Prabhupāda: That is fact. These rascals come here for women and money, that's all. They do not know what is spiritual life. If I say like that, you think it is right or wrong?

Puṣṭa Kṛṣṇa: . . . think the nondevotees would like to be classified in one of those four categories.

Prabhupāda: But they are. They may not . . . they may like or not like, it doesn't matter, but they are. (break)

Puṣṭa Kṛṣṇa: . . . that even persons who come to Kṛṣṇa with material desires, although . . .

Prabhupāda: They are pious.

Puṣṭa Kṛṣṇa: So is it to be understood that a very simple person who has all kinds of material desires, if he approaches God . . .?

Prabhupāda: Because he has approached God, therefore he's pious. Even though he has got material desires. Akāmaḥ sarva-kāmo vā mokṣa-kāma (SB 2.3.10). One day, he will become devotee. Just like Dhruva Mahārāja. He went to search God for some material benefit, but when he became perfect, he became pure devotee. (break)

Śubhavilāsa: . . . initiated devotee, and he follows those four regulative principles and chants sixteen rounds, will he go back to Godhead?

Śubhavilāsa: But by taking initiation, will that speed up the process?

Satsvarūpa: . . . professor who's going to see you tonight, Professor O'Connell, he wrote a book review of Dr. Judah's book about our movement. And he said it was a very sympathetic book, Dr. Judah's, he said, and a little bit too sympathetic on one point. And he made his statement. He thinks that our movement, the way we deny the flesh, he said, he called "denying the flesh," it tends to make us a little cold in our relations to each other, and people in the Hare Kṛṣṇa movement are denying the natural affection that is somehow connected with the flesh.

Prabhupāda: No, we want to, what is called, reject that society. We cannot become sympathetic with everyone. That is not our policy. Asat-saṅga-tyāga vaiṣṇava ācāra (CC Madhya 22.87).

Hari-śauri: We can go back now if you like, Śrīla Prabhupāda.

Prabhupāda: Caitanya Mahāprabhu, when He was asked what is the general behavior of a Vaiṣṇava, He said that the first thing is that you should give up bad company. So these are bad company. We cannot have any sympathy. We cannot make any compromise with everyone. That is not possible. The modern scientists, they have made quarantine?

Prabhupāda: Quarantine? What is that?

Hari-śauri: If someone has a disease, they separate.

Prabhupāda: Those who are infected, they should be separated. You cannot make any compromise.

Satsvarūpa: His point was that even amongst ourselves, even amongst the devotees, he says, there is not enough expression of love, because we don't allow . . .

Prabhupāda: Well, then . . . trying to be perfect.

Satsvarūpa: I think what it comes down to is that he objects that we are against illicit sex.

Prabhupāda: Oh. (laughter) That means he is accustomed.

Jagadīśa: These professors sit around, discuss topics of Caitanya Mahāprabhu, and drink wine.

Satsvarūpa: And their discussion is very blasphemous. This Dr. Dimmock, he's made much investigation upon the six Gosvāmīs, and he's read all manuscripts, and he's always going to India and studying Rūpa Gosvāmī and Lord Caitanya, but everything is extremely blasphemous that he writes. So in both ways—in their habits and whatever they write. So the Library Party men, they become friendly to these professors, but only to use them more or less, that they'll accept our books, despite themselves.

Prabhupāda: Yes, that we must do. (break) . . . policy is when we go to a, what is called, a bad character, we don't go to associate with him, but to give him our association. Therefore we must be strong and very pure, so that your association, they will be benefited. For the preachers, īśvare tad-adhīneṣu bāliśeṣu dviṣatsu (SB 11.2.46), the four behavior. Īśvara, tad-adhīneṣu, devotees, bāliśeṣu, innocent, and dviṣatsu, those who are envious. So a devotee, those who are preachers, they, prema, loving God, making friendship with devotee, and those who are innocent, to deliver. And those who are envious, reject. (break)

Satsvarūpa: He said that we don't . . . we deny expression of love through the body. Just like the gṛhasthas are not allowed, except to have children, to have sex, and brahmacārīs not at all. So by denying . . . these are natural ways to express love, he says, and by denying them, the people in this movement become somewhat cold and don't have the experience of love.

Prabhupāda: Love? This is love or lust?

Satsvarūpa: He says there's a definite connection between the flesh and love, and you can't deny it, he said. I argued with him, but that was his viewpoint, that love is expressed through the flesh.

Prabhupāda: Then how he has become a doctor in Vaiṣṇava philosophy?

Puṣṭa Kṛṣṇa: That would mean that the dog is a great lover, because he's so lusty.

Prabhupāda: No, in the Caitanya-caritāmṛta there is explanation, what is the difference between lust and love.

Satsvarūpa: I told him if you observe the devotees, you'll see they have very affectionate loving dealings with one another, but it's not based on the flesh. We don't have to . . .

Prabhupāda: That is lust. Sahajiyā. Lust is going on as love. (break) . . . reviewed Dr. Judah's book?

Satsvarūpa: Yes. Basically, he said it was a good book and that our movement is an important movement. But he made that one objection.

Devotee: Then how does he explain how so many devotees can live together peacefully and happily if there's no reciprocation of love? Materialists can't even live together with their wife for very long. (break)

Puṣṭa Kṛṣṇa: The question might arise that a jñānī is someone who is aware of his spiritual nature, that he's not this body, ahaṁ brahmāsmi. Then the karmī is one who is dehātma-buddhi, in the bodily concept of life, and he's desiring so many materialistic things. So how can it be that the karmī, who is after some material benefit, if he approaches Kṛṣṇa, he can be better off than the jñānī?

Prabhupāda: Because he has approached Kṛṣṇa.

Puṣṭa Kṛṣṇa: Even he may be in the bodily concept?

Prabhupāda: Oh, yes. That will be rectified. Sat sad bhavati dharmātmā (BG 9.31). Huh? What is that? Kaunteya pratijānīhi na me bhaktaḥ praṇaśyati. Api cet sudurācāro bhajate mām ananya-bhāk (BG 9.30). When one has come to the fire, some way or other, he'll be warm, gradually. That is the . . . he has come to the right path. (break) . . . kāmād bhayāt, krodhāt. Either . . . anyone who comes to Kṛṣṇa . . . just like gopīs, they were captivated. They were village girls. They did not know what is God, what is Brahman, nothing. But they were captivated: "Kṛṣṇa is very beautiful boy." That's all. Even they forgot their own husbands. Everyone. (break) . . . or other, we have to develop our intense love of Kṛṣṇa. Then life is perfect. (break) (in car) . . . one who is accepting this body as self, sa eva go-kharaḥ (SB 10.84.13). They are making paper?

Prabhupāda: From tar, you find paper?

Viśvakarmā: Yes. All different types of packaging have mills as well. (break)

Puṣṭa Kṛṣṇa: When it snows on the highways, trucks come and they pour salt so it keeps the snow melting. More friction on the road for the tires. (break)

Prabhupāda: . . . wine and cigarettes, just like here you can purchase by slot. What is called?

Prabhupāda: Machine. Yes. That is there. You pay, and get cigarette and drink can. There are many boxes like that on the street, public street. And they pass urine on the road. There is no restriction, standing apart.

Prabhupāda: Every few step, there is a shop, young girl, wine, and a man is sitting.

Prabhupāda: Beer. Yes. Sadānanda told me. He was drinking beer, barrels. (laughs) He told me.

Hari-śauri: They even have a mug so big that it takes one gallon of beer at a time.

Prabhupāda: And they drink.