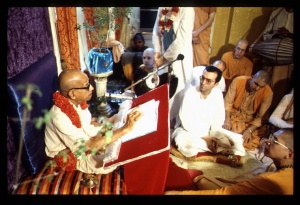 According to Bhagavad-gītā, every living entity within the material world is eternally a minute fragmental portion of the Supreme Personality of Godhead. Mamaivāṁśo jīva-loke jīva-bhūtaḥ sanātanaḥ (BG 15.7). But because of the influence of māyā the puffed-up conditioned souls become inimical to the service of the Lord and the Lord's devotees, choose leaders among the materialistic sense gratifiers, and thus engage busily in a useless society of the cheaters and the cheated, a society of the blind leading the blind into a ditch. Although the community of Vaiṣṇavas is sincerely eager to serve the conditioned souls by bringing them back to their constitutional position, by māyā's influence the materialistic living entity becomes hardhearted and rejects the mercy of the Lord's devotees.

According to Śrīla Bhaktisiddhānta Sarasvatī Ṭhākura, although a second-class devotee is eager to preach to the innocent conditioned souls, he should avoid the atheistic class of men so that he will not become disturbed or polluted by their association. Śrīla Viśvanātha Cakravartī Ṭhākura has confirmed that a Vaiṣṇava should be indifferent to those who are envious of the Supreme Lord. It is practically seen that when such persons are informed of the glories of the Supreme Personality of Godhead, they attempt to ridicule the Supreme Lord, thus further deteriorating their polluted existence. In this connection Śrīla Viśvanātha Cakravartī Ṭhākura has quoted from the Tenth Canto of Śrīmad-Bhāgavatam (SB 10.20.36):

In this regard, Śrīla Jīva Gosvāmī has mentioned that although the first-class devotee of the Lord may at times exhibit apparent hatred toward the demons because of entering the mood of the Lord's pastimes, the intermediate devotees should avoid such feelings. Furthermore, the intermediate devotee should not in any way associate with the powerful atheistic class of men, because there is danger that his mind will become bewildered by such association. According to Śrīla Viśvanātha Cakravartī Ṭhākura, if a Vaiṣṇava preacher encounters one who is envious of him, the preacher should remain far away from such an envious person. But the Vaiṣṇava preacher may meditate upon ways to save the envious class of men. Such meditation is called sad-ācāra, or saintly behavior. Śrīla Jīva Gosvāmī has mentioned Prahlāda Mahārāja as an example of a saintly person. In Śrīmad-Bhāgavatam (SB 7.9.43) there is the following statement by Prahlāda:

"O best of the great personalities, I am not at all afraid of material existence, for wherever I stay I am fully absorbed in thought of Your glories and activities. My concern is only for the fools and rascals who are making elaborate plans for material happiness and maintaining their families, societies and countries. I am simply concerned with love for them." Although a Vaiṣṇava preacher constantly meditates on the welfare of all living entities, he will not associate with those who are unreceptive to the message of the Supreme Lord, Kṛṣṇa. In this regard Śrīla Viśvanātha Cakravartī Ṭhākura states that even Bharata Mahārāja, Vyāsadeva and Śukadeva Gosvāmī do not exhibit their mercy indiscriminately.

Śrīla Bhaktisiddhānta Sarasvatī Ṭhākura has given an elaborate explanation to prove that the discrimination employed by a madhyama-adhikārī preacher does not at all show a lack of mercy. He states that upekṣā, or neglect, as mentioned in this verse, is the proper medicine for those who are inimical to the Supreme Lord and His devotees. Indifference from the preacher checks feelings of hostility on both sides. Although there is a Vedic injunction that one should cut out the tongue of a person who offends the Supreme Lord and His devotees, in this age it is best simply to avoid potential offenders and thus prevent them from committing further sinful activities against the Vaiṣṇavas. It is the duty of a Vaiṣṇava preacher to point out the futility of any process besides surrendering to the Supreme Lord. An envious person, however, will resent such strong preaching by a Vaiṣṇava and disrespect him, considering the devotee to be unnecessarily criticizing others. Such a person, who cannot appreciate the mercy of Vaiṣṇavas, should be neglected. Otherwise, according to Śrīla Bhaktisiddhānta Sarasvatī Ṭhākura, his cheating mentality will increase day by day.

Those who are not attracted to the saṅkīrtana movement of Śrī Caitanya Mahāprabhu and who disrespect the faithful servants of Lord Caitanya, considering their strong statements about the saṅkīrtana movement to be obstacles to their own worship of the Lord, will never be able to fix their minds on Kṛṣṇa, but will gradually fall down from the path of devotion by confusing the external activities of the material world with the actual worship of the Supreme Personality of Godhead, Kṛṣṇa. Such bewilderment has been expressed by the words bhayaṁ dvitīyābhiniveśataḥ syāt.

Śrīla Bhaktisiddhānta Sarasvatī Ṭhākura has strongly rejected those foolish persons who, under a plea of mercy and equal vision, perceive that a faithless person is also a devotee of the Supreme Lord and who thus try to thrust the hari-nāma, or holy name of God, upon such offensive people. Śrīla Bhaktisiddhānta has stated, "When childish people think themselves mahā-bhāgavatas and act in defiance of the Vaiṣṇava spiritual master, such behavior simply holds them back from receiving the mercy of the Vaiṣṇava guru. Bewildered by false ego, these self-proclaimed devotees gradually become fit to be ignored by pure devotees on the intermediate platform and are cheated of the mercy that comes from the devotees' satisfaction. Thus they become asādhu by constantly committing offenses against the devotees who preach the holy name of Kṛṣṇa. Pure devotees, therefore, in all circumstances display indifference to those who falsely imagine themselves to be viśuddha-bhaktas, or pure devotees of the Lord. This indifference is an excellent manifestation of their mercy." In other words, those who criticize the Vaiṣṇava preachers on the second-class platform for discriminating between those who are fit to receive the Lord's mercy and those who are simply envious are misunderstanding the mission of the Lord. Kṛṣṇa Himself states in Bhagavad-gītā (BG 4.8):

"To deliver the pious and to annihilate the miscreants, as well as to reestablish the principles of religion, I advent Myself millennium after millennium." Even such a great Vaiṣṇava as Śukadeva Gosvāmī, one of the twelve mahājanas in this universe, expressed his contempt for the evil Kaṁsa.

Śrīla Jīva Gosvāmī has pointed out that even though the mahā-bhāgavata devotee may act on the second-class platform for preaching, his rejection of the envious living entities does not obstruct his vision of the Lord as all-pervading. Rather, when a first-class devotee or even a second-class devotee rejects the atheistic class of men, he is expressing the mission of the Supreme Personality of Godhead. A first-class or second-class Vaiṣṇava never actually becomes envious of another living entity, but out of intense love for the Supreme Lord he becomes angry when the Lord is offended. Also, understanding the Lord's mission, he discriminates according to the position of a particular living entity. To consider such a Vaiṣṇava preacher an ordinary, envious person, or to consider him sectarian because of his proclamation of pure devotional service as the most exalted of all methods of spiritual advancement, reflects a materialistic vision called vaiṣṇave jāti-buddhiḥ or guruṣu nara-matiḥ. Such an offense drags the offender down to a hellish condition of life by the laws of nature.

According to Śrīla Jīva Gosvāmī, although a mahā-bhāgavata sees every living entity as a pure spirit soul, such a mahā-bhāgavata still experiences special ecstasies and other symptoms upon meeting another Vaiṣṇava. This is not contradictory to his vision as a topmost devotee; rather, it is a symptom of his love for Kṛṣṇa. A pure devotee sees every living entity as part and parcel of Kṛṣṇa and therefore expresses his love for Kṛṣṇa through love for all the expansions and creations of Kṛṣṇa. Still, such a mahā-bhāgavata feels special ecstatic love upon seeing another living entity directly pleasing the senses of the Supreme Lord. Such feelings are manifest in the statement of Lord Śiva to the Pracetās:

"If one by chance associates with a devotee, even for a fraction of a moment, he no longer is subject to attraction by the results of karma or jñāna. What interest then can he have in the benedictions of the demigods, who are subject to the laws of birth and death?" (SB 4.24.57) Similarly, Lord Śiva also stated:

The wonderful loving dealings between Vaiṣṇavas on the topmost platform are demonstrated in the pastimes of Caitanya-caritāmṛta. In other words, although a Vaiṣṇava sees every living entity as part and parcel of Kṛṣṇa, he must discriminate in his external behavior so as not to interfere with the original purpose of the Lord's creation, which is to reform the living entities so that they can gradually come back home, back to Godhead. A pure devotee does not foolishly pretend equal vision and approach envious persons; rather, he respects the mission of the Lord, as stated in Bhagavad-gītā (BG 4.11) by the words ye yathā māṁ prapadyante tāṁs tathaiva bhajāmy aham. On the other hand, if it is the Lord's desire, a pure devotee can offer his respects to all living beings. For example, Śrīla Jīva Gosvāmī mentions that Uddhava and other pure devotees of the Lord were always prepared to offer respectful obeisances even to such persons as Duryodhana. Madhyama-adhikārīs, however, should not imitate such uttama-adhikārī behavior. In this connection, the distinction between madhyama-adhikārī and uttama-adhikārī is stated by Śrīla Viśvanātha Cakravartī Ṭhākura as follows: atra sarva-bhūteṣu bhagavad-darśana-yogyatā yasya kadācid api na dṛṣṭā. A madhyama-adhikārī cannot at any time perceive the presence of the Supreme Lord within all living beings, whereas an uttama-adhikārī, however he acts on the second-class platform to carry out the Lord's mission, is aware that every living entity is ultimately a forgetful Kṛṣṇa conscious living entity. Therefore, although a devotee may externally engage four different types of behavior, as mentioned in this verse—namely, worship of the Lord, friendship with the devotees, preaching to the innocent and rejection of the demons—he is not necessarily on the second-class platform, since an uttama-adhikārī also may exhibit these symptoms to carry out the Lord's mission. In this regard, Śrīla Bhaktisiddhānta Sarasvatī Ṭhākura mentions that it is the duty of the madhyama-adhikārī to extend himself as the right hand of the uttama-adhikārī, vowing to work for the benefit of others and offering to help in distributing love of Kṛṣṇa.

Finally, Śrīla Bhaktisiddhānta Sarasvatī Ṭhākura has given a nice explanation of the difference between arcana and bhajana. Arcana refers to the platform of sādhana-bhakti, in which one serves the Lord to carry out the rules and regulations of the process. One who has achieved the shelter of the Lord's holy name and is totally engaged in the attempt to serve the Lord should be considered to be on the platform of bhajana, even though his external activities may sometimes be less strict than those of the neophyte engaged in arcana. This apparent lack of strictness, however, refers to laxity not in the basic principles of sane behavior and renunciation of sense gratification, but rather in the details of Vaiṣṇava ceremonies.