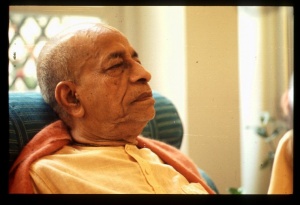 So Lord Caitanya has explained the particular features of Kṛṣṇa, and He's giving evidence from Brahma-saṁhitā and other authentic Vedic literatures. So we have concluded that Kṛṣṇa is the origin. Origin. There are many demigods, gods, and living entities, energies, millions and millions. Parāsya śaktir vividhaiva śrūyate (Śvetāśvatara Upaniṣad 6.8).

Sarvādi, sarvāṁśī. He is the whole, and everything is part. And He is always just like a young boy of sixteen years old. And His body is transcendental, spiritual, full of bliss, eternity, and He is the shelter of everything. On Him everything is resting, and sarveśvara, He is the Supreme Lord.

Now, that Supreme Personality of Godhead, Kṛṣṇa . . . "Kṛṣṇa" is the original name of God, and "Govinda" is the qualitative name, transcendental qualitative. This Govinda, we have explained. Go means land, go means senses and go means . . . land, senses . . .

Prabhupāda: Cow. Yes. This we have explained. And because He gives pleasure to all these things especially, cows and land and the senses, He is known as Govinda. Sarvaiśvarya-pūrṇa. He is full of all opulences.

Śriyaḥ means beauty. Nobody can be more beautiful than Kṛṣṇa. And jñāna, knowledge. Nobody can be more knower and full of knowledge than Kṛṣṇa. And renunciation. And He is also, at the . . . having so many opulences. He is renouncer of . . . He has nothing to do with all these things. He does not depend for His Godheadship on these qualifications. He is renouncer at the same time.

So we are seeking after peace, but we do not know that where we are living. We are claiming proprietorship for the time being. We come here under different shapes, in different body, and claim proprietorship for the land where we are born. But we do not know by freaks of nature any second we can be driven away from this land and put another land. So where is my proprietorship? If I am staying for some time here, some time there some time here . . . bhojanaṁ yatra yatra śayanaṁ haṭṭa-mandire: "I eat wherever eatables are available, and I sleep on the marketplace." Then where is my home? Where is my home?

That misunderstanding . . . we are falsely encroaching upon and falsely claiming proprietorship. Therefore there is no peace. You are searching after peace. How can there be peace? You are falsely claiming something which does not belong to you. So here it is said, sarvaiśvarya-pūrṇa.

So every place belongs to God, but that Goloka Vṛndāvana, that place, is particularly His abode. You have seen the picture. It is lotuslike. All planets are round, but that supreme planet is lotuslike. So that is in the spiritual sky, Goloka Vṛndāvana. And from that spiritual planet . . . just like the, from the sun planet, the sunshine is emanating profusely. Just like this sun is, is compared with the eye, eyes of the Lord. Not . . . one eye. Another eye, the moon. It is figuratively stated. Yac-cakṣur eṣa savitā sakala-grahāṇāṁ rājā samasta-sura-mūrtir aśeṣa-tejāḥ (Bs 5.52).

(break) Ṣaḍ-aiśvarya-pūrṇa yāṅra goloka-nitya-dhāma. So origin. He is the origin. His planet, Goloka Vṛndāvana, is the original planet, and from that planet, that brahma-jyoti, light, is coming. And in that light, everything is resting. And in an insignificant portion of that light, this material world is situated.

So just see how much insignificant we are. And we are claiming "God." Do not know . . . śaḍ-aiśvarya-pūrṇa. This is called ignorance. We do not know how much insignificant we are in the creation of God, and we are claiming "God." This is called poor fund of knowledge. Poor fund of knowledge.

So do not think that the Hindus, they have got disregard for Lord Buddha or for Lord Jesus Christ. No. They have all regard. Anyone who comes as representative of God, or as God, as powerful incarnation, they are all welcome. According to time, according to place, according to the audience, they may speak, speak something which is, which may be different from the Vedic conclusion, but they are accepted as powerful incarnation.

So in that list of incarnations, Kṛṣṇa's name is also there. But just to particularize Kṛṣṇa from all others, this verse is mentioned there. What is that? Ete. Ete means "All this list of incarnations that we have seen or we are reading in the Śrīmad-Bhāgavatam . . ." Ete ca aṁśa-kalāḥ puṁsaḥ. Puṁsaḥ means the Supreme Lord. "The Supreme Lord's plenary portion or portion of the plenary portion . . ." Just like the . . . I have several times mentioned in this room, that the original lamp . . . this is original lamp. And you kindle another candle, from that, another, from that, another, from . . . in that . . . thousands and millions of candles you can light up, but the original is called the original.

Similarly, the original God is Kṛṣṇa. From Him, Baladeva, and from Him, Saṅkarṣaṇa, and from Saṅkarṣaṇa, then Nārāyaṇa, and Nārāyaṇa, then second Saṅkarṣaṇa, the second Saṅkarṣaṇa, puruṣa avatāra, then puruṣa avatāra, Mahā-Viṣṇu . . . you have seen the picture in the, what is called, title page of the Śrīmad-Bhāgavatam. The Mahā-Viṣṇu is lying in the, lying in the Causal Ocean, and in that Causal Ocean, from Mahā-Viṣṇu, from His breathing, millions and millions universes are coming out. And when He, when He breathes externally, the universes come out, and when He inhales, all the universes go into Him. You see? That Mahā-Viṣṇu.

So all these list . . . Bhāgavata is specifying about Kṛṣṇa. All this full list of God's incarnation . . . either they are part, plenary part, or parts of the parts of the parts of the Supreme, but here, the name "Kṛṣṇa," He's the original God. Kṛṣṇas tu bhagavān svayam (SB 1.3.28): "The Supreme Personality of Godhead is Kṛṣṇa." That has been particularly pointed out in Śrīmad-Bhāgavatam, although there are list of many. So, but, that Kṛṣṇa, although He is original, still, indrāri-vyākulaṁ lokaṁ mṛḍayanti yuge yuge (SB 1.3.28).

Indrāri. Indra. Indra is the king of heaven. And ari, ari means enemy. Just like the heavenly king and the Satan, conception of Satan. So when there is satanic influence over the kingdom of God, or the devotees, or the appointed demigods, they are disturbed by satanic influence, then Kṛṣṇa comes. Yadā yadā hi . . . that is stated, confirmed, in Bhagavad-gītā.

Whenever there is discrepancies in the . . . in the discharge of natural laws of God, then God incarnates. Either He incarnates Himself, or He sends His bona fide representative, or He sends His powerful representative, like that. So whenever there is incarnation of God, it is to be understood that there is discrepancies in the matter of discharging the laws made by God. And the laws made by God is called dharma, dharma, or religion.

When incarnation comes, now, paritrāṇāya sādhūnām, the first business is to give protection to the devotees. There is no necessity of God's coming here to settle up things. There is no necessity. He has got omnipotential power. He can do without His presence. But when His devotees become very much disturbed, He comes personally. He comes personally, sends His representative. Paritrāṇāya sādhūnām. Sādhūnām means devotees.

So paritrāṇāya sādhū and vināśāya ca duṣkṛtām. And simultaneously, when He comes, all these miscreants, they are killed. They are annihilated. Vināśāya ca duṣkṛtām. Dharma-saṁsthāpanārthāya, and reestablishing the principle of religion. Yuge yuge sambhavāmi. The Lord says, "I come in different millenniums."

So that is going on. There are innumerable universes, which you cannot estimate, and each of the universes, the Lord is incarnating Himself by one of His plenary portions. Kṛṣṇa is present in some of the universes even now. We do not know where is that universe, because we cannot see. What is information we have got? We do not know anything about this universe. We see so many stars in the night, so many sun, moon, but what do we know about them? Still, we are claiming that "We are very powerful. We are very advanced in knowledge." This is our poor fund of knowledge. Anyone who is claiming that "I am God" or "I am everything," he is a fool number one. Take it for . . . immediately take that fool. And What does he know? So indrāri-vyākulaṁ lokam (SB 1.3.28).

There are many universes and many planets. So in either of them or each of them, some sort of incarnation is present there. Just like in government, in every department, there is a government representative. Just like in your city, your mayor, mayor is there. Or very responsible post, there is some director, there is . . . similarly, indrāri-vyākulaṁ mṛḍayanti yuge yuge. Yuge yuge means different yugas.

The same example, just like the sun. The sun is present everywhere. Just at this moment it is now eight, eight o'clock (a.m.) in New York. In India it is night, there is no sun. But here it is, sun present. Similarly, in your country also, if you go more farther eastern, western side, somewhere the sun is I mean it's already there somewhere, somewhere the sun is not there. So similarly, the sun is there, but it is the particular time and place where people can see and cannot see. So Kṛṣṇa is there always, everywhere, but it is the power of seeing where Kṛṣṇa is or Kṛṣṇa is not.

So indrāri-vyākulam . . . He is, by His one plenary portion, He is in either of the all universes. So in this universe, when He comes . . . just like when sun appears in your country it takes round of twenty-four hours, similarly, when Kṛṣṇa comes on this universe, it is only in one day of Brahmā, that is, some millions and millions of years after, He comes. He has got a scheduled time also, to appear in this universe. We get information from authentic scripture. Indrāri-vyākulaṁ lokaṁ mṛḍayanti yuge yuge.

So He is . . . just like sun is rotating, or we are rotating, similarly, Kṛṣṇa is there. At a certain interval of time we see Him in this universe. He is present always, but at a certain interval . . . just like the motorcar passes. It is going on. But when it is in front of my storefront, I can see. That's all. Not that because the motorcar has passed away, out of my sight, there is no motorcar. No. It has passed away from your sight. That's all. It is going on. It is going on. Similarly, incarnation, representation of Kṛṣṇa, is always going on. When we can see, then it is . . . Kṛṣṇa we can see. That is His omnipotency.

Now to understand that Kṛṣṇa . . . already said that bhakti, only devotional service, can help you in understanding that Supreme Kṛṣṇa.

That same Kṛṣṇa, He manifests Himself before you in three different features. What is that? Paraṁ brahma. Brahman, impersonal Brahman; impersonal ātmā, Supersoul; and Bhagavān, the Supreme Personality of Godhead. The same Kṛṣṇa. Actually Kṛṣṇa is everything. He is the Supreme Personality of Godhead, Godhead, and He is ātmā. He is situated as Paramātmā, the Supersoul, in everyone's heart. And He is Brahman. He is impersonal brahma-jyoti spreading everywhere.