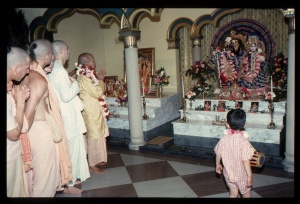 Everything animate or inanimate that is within the universe is controlled and owned by the Lord. One should therefore accept only those things necessary for himself, which are set aside as his quota, and one should not accept other things, knowing well to whom they belong.

Vedic knowledge is infallible because it comes down through the perfect disciplic succession of spiritual masters, beginning with the Lord Himself. Since He spoke the first word of Vedic knowledge, the source of this knowledge is transcendental. The words spoken by the Lord are called apauruṣeya, which indicates that they are not delivered by any mundane person. A living being who lives in the mundane world has four defects: (1) he is certain to commit mistakes; (2) he is subject to illusion; (3) he has a propensity to cheat others; and (4) his senses are imperfect. No one with these four imperfections can deliver perfect knowledge. The Vedas are not produced by such an imperfect creature. Vedic knowledge was originally imparted by the Lord into the heart of Brahmā, the first created living being, and Brahmā in his turn disseminated this knowledge to his sons and disciples, who have handed it down through history.

Since the Lord is pūrṇam, all-perfect, there is no possibility of His being subjected to the laws of material nature, which He controls. However, both the living entities and inanimate objects are controlled by the laws of nature and ultimately by the Lord's potency. This Īśopaniṣad is part of the Yajur Veda, and consequently it contains information concerning the proprietorship of all things existing within the universe.

The Lord's proprietorship over everything within the universe is confirmed in the Seventh Chapter of the Bhagavad-gītā (7.4-5), where parā and aparā prakṛti are discussed. The elements of nature—earth, water, fire, air, ether, mind, intelligence and ego—all belong to the Lord's inferior, material energy (aparā prakṛti),whereas the living being, the organic energy, is His superior energy (parā prakṛti). Both of these prakṛtis, or energies, are emanations from the Lord, and ultimately He is the controller of everything that exists. There is nothing in the universe that does not belong to either the parā or the aparā prakṛti; therefore everything is the property of the Supreme Being.

Because the Supreme Being, the Absolute Personality of Godhead, is the complete person, He has complete and perfect intelligence to adjust everything by means of His different potencies. The Supreme Being is often compared to a fire, and everything organic and inorganic is compared to the heat and light of that fire. Just as fire distributes energy in the form of heat and light, the Lord displays His energy in different ways. He thus remains the ultimate controller, sustainer and dictator of everything. He is the possessor of all potencies, the knower of everything and the benefactor of everyone. He is full of inconceivable opulence, power, fame, beauty, knowledge and renunciation.

One should therefore be intelligent enough to know that except for the Lord no one is a proprietor of anything. One should accept only those things that are set aside by the Lord as his quota. The cow, for instance, gives milk, but she does not drink that milk: she eats grass and straw, and her milk is designated as food for human beings. Such is the arrangement of the Lord. Thus we should be satisfied with those things He has kindly set aside for us, and we should always consider to whom those things we possess actually belong.

Take, for example, our dwelling, which is made of earth, wood, stone, iron, cement and so many other material things. If we think in terms of Śrī Īśopaniṣad, we must know that we cannot produce any of these building materials ourselves. We can simply bring them together and transform them into different shapes by our labor. A laborer cannot claim to be a proprietor of a thing just because he has worked hard to manufacture it.

In modern society there is always a great quarrel between the laborers and the capitalists. This quarrel has taken an international shape, and the world is in danger. Men face one another in enmity and snarl just like cats and dogs. Śrī Īśopaniṣad cannot give advice to the cats and dogs, but it can deliver the message of Godhead to man through the bona fide ācāryas (holy teachers). The human race should take the Vedic wisdom of Śrī Īśopaniṣad and not quarrel over material possessions. One must be satisfied with whatever privileges are given to him by the mercy of the Lord. There can be no peace if the communists or capitalists or any other party claims proprietorship over the resources of nature, which are entirely the property of the Lord. The capitalists cannot curb the communists simply by political maneuvering, nor can the communists defeat the capitalists simply by fighting for stolen bread. If they do not recognize the proprietorship of the Supreme Personality of Godhead, all the property they claim to be their own is stolen. Consequently they will be liable to punishment by the laws of nature. Nuclear bombs are in the hands of both communists and capitalists, and if both do not recognize the proprietorship of the Supreme Lord, it is certain that these bombs will ultimately ruin both parties. Thus in order to save themselves and bring peace to the world, both parties must follow the instructions of Śrī Īśopaniṣad.

Human beings are not meant to quarrel like cats and dogs. They must be intelligent enough to realize the importance and aim of human life. The Vedic literature is meant for humanity and not for cats and dogs. Cats and dogs can kill other animals for food without incurring sin, but if a man kills an animal for the satisfaction of his uncontrolled taste buds, he is responsible for breaking the laws of nature. Consequently he must be punished.

The standard of life for human beings cannot be applied to animals. The tiger does not eat rice and wheat or drink cow's milk, because he has been given food in the shape of animal flesh. Among the many animals and birds, some are vegetarian and others are carnivorous, but none of them transgress the laws of nature, which have been ordained by the will of the Lord. Animals, birds, reptiles and other lower life forms strictly adhere to the laws of nature; therefore there is no question of sin for them, nor are the Vedic instructions meant for them. Human life alone is a life of responsibility.

It is wrong, however, to think that simply by becoming a vegetarian one can avoid transgressing the laws of nature. Vegetables also have life, and while it is nature's law that one living being is meant to feed on another, for human beings the point is to recognize the Supreme Lord. Thus one should not be proud of being a strict vegetarian. Animals do not have developed consciousness by which to recognize the Lord, but a human being is sufficiently intelligent to take lessons from the Vedic literature and thereby know how the laws of nature are working and derive profit out of such knowledge. If a man neglects the instructions of the Vedic literature, his life becomes very risky. A human being is therefore required to recognize the authority of the Supreme Lord and become His devotee. He must offer everything for the Lord's service and partake only of the remnants of food offered to the Lord. This will enable him to discharge his duty properly. In the Bhagavad-gītā (9.26) the Lord directly states that He accepts vegetarian food from the hands of a pure devotee. Therefore a human being should not only become a strict vegetarian but should also become a devotee of the Lord, offer the Lord all his food and then partake of such prasādam, or the mercy of God. Only those who act in this way can properly discharge the duties of human life. Those who do not offer their food to the Lord eat nothing but sin and subject themselves to various types of distress, which are the results of sin (BG 3.13).

The root of sin is deliberate disobedience of the laws of nature through disregarding the proprietorship of the Lord. Disobeying the laws of nature or the order of the Lord brings ruin to a human being. Conversely, one who is sober, who knows the laws of nature, and who is not influenced by unnecessary attachment or aversion is sure to be recognized by the Lord and thus become eligible to go back to Godhead, back to the eternal home.