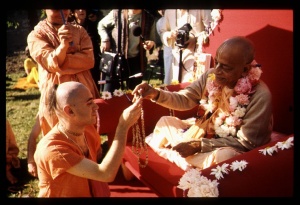 The Śuka mentioned here is different from the Śukadeva Gosvāmī who spoke Śrīmad-Bhāgavatam. Śukadeva Gosvāmī, the son of Vyāsadeva, is described in great detail in the Brahma-vaivarta Purāṇa. There it is said that Vyāsadeva maintained the daughter of Jābāli as his wife and that after they performed penances together for many years, he placed his seed in her womb. The child remained in the womb of his mother for twelve years, and when the father asked the son to come out, the son replied that he would not come out unless he were completely liberated from the influence of māyā. Vyāsadeva then assured the child that he would not be influenced by māyā, but the child did not believe his father, for the father was still attached to his wife and children. Vyāsadeva then went to Dvārakā and informed the Personality of Godhead about his problem, and the Personality of Godhead, at Vyāsadeva's request, went to Vyāsadeva's cottage, where He assured the child in the womb that he would not be influenced by māyā. Thus assured, the child came out, but he immediately went away as a parivrājakācārya. When the father, very much aggrieved, began to follow his saintly boy, Śukadeva Gosvāmī, the boy created a duplicate Śukadeva, who later entered family life. Therefore, the śuka-kanyā, or daughter of Śukadeva, mentioned in this verse is the daughter of the duplicate or imitation Śukadeva. The original Śukadeva was a lifelong brahmacārī.