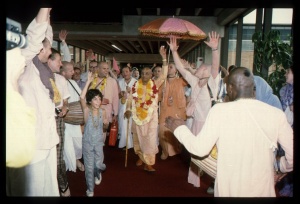 Your father, Virocana, the son of Mahārāja Prahlāda, was very affectionate toward brāhmaṇas. Although he knew very well that it was the demigods who had come to him in the dress of brāhmaṇas, at their request he delivered to them the duration of his life.

Mahārāja Virocana, Bali's father, was so pleased with the brāhmaṇa community that even though he knew that those approaching him for charity were the demigods in the dress of brāhmaṇas, he nonetheless agreed to give it.