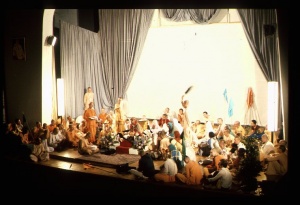 A pretentious religious system manufactured by one who willfully neglects the prescribed duties of his order of life is called ābhāsa [a dim reflection or false similarity]. But if one performs the prescribed duties for his particular āśrama or varṇa, why are they not sufficient to mitigate all material distresses?

It is indicated here that everyone should strictly follow the principles of varṇa and āśrama as given in the śāstra. In the Viṣṇu Purāṇa (3.8.9) it is said:

One should focus upon the destination for progress, which is to become Kṛṣṇa conscious. This is the aim and end of all varṇas and āśramas. However, if Viṣṇu is not worshiped, the followers of the varṇāśrama institution manufacture some concocted God. Thus it has now become fashionable for any rascal or fool to be elected God, and there are many missionaries who have concocted their own gods, giving up their relationship with the real God. In Bhagavad-gītā it is clearly said that one who worships the demigods has lost his intelligence. Nonetheless we find that even an illiterate person who has lost all intelligence is elected God, and although he has a temple, it has meat-eating sannyāsīs, and many polluted activities go on there. This type of religious system, which misguides its poor followers, is strictly forbidden. Such pretentious religions should be stopped altogether.

The original system is that a brāhmaṇa should actually become a brāhmaṇa; he should not only take birth in a brāhmaṇa family, but must also be qualified. Also, even if one is not born in a brāhmaṇa family but has brahminical qualifications, he must be considered a brāhmaṇa. By strictly following this system, one can be happy without extra endeavor. Sva-bhāva-vihito dharmaḥ kasya neṣṭaḥ praśāntaye. The real aim of life is to mitigate distress, and one can do this very easily by following the principles of śāstra.