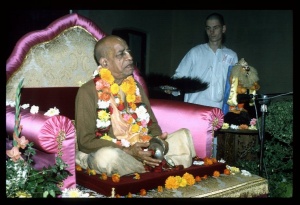 This is a quotation from the Viṣṇu Purāṇa (3.8.9). As stated by Śrīla Bhaktivinoda Ṭhākura in his Amṛta-pravāha-bhāṣya, “The purport is that one can realize life’s perfection simply by satisfying the Supreme Personality of Godhead.” This is also confirmed in Śrīmad-Bhāgavatam (SB 1.2.13):

“O best among the twice-born, it is therefore concluded that the highest perfection one can achieve by discharging the duties prescribed for one’s own occupation according to caste divisions and orders of life is to please the Personality of Godhead.”

Every man should perform his occupational duty in the light of his particular tendency. According to his abilities, one should accept a position in the varṇāśrama institution. The divisions of brāhmaṇa, kṣatriya, vaiśya and śūdra are natural divisions within society. Indeed, everyone has a prescribed duty according to the varṇāśrama-dharma. Those who properly execute their prescribed duties live peacefully and are not disturbed by material conditions. The spiritual orders—brahmacarya, gṛhastha, vānaprastha and sannyāsa—are called āramas. If one executes his prescribed duty in both the social and spiritual orders, the Supreme Personality of Godhead is satisfied. If one neglects his duties, however, he becomes a transgressor and a candidate for a hellish condition. Actually we see that different people are engaged in different ways; therefore there must be divisions according to work. To attain perfection, one must make devotional service the center of life. In this way one can awaken his natural instincts by work, association and education. One should accept the varṇāśrama divisions by qualification, not by birth. Unless this system is introduced, human activities cannot be systematically executed.

The brāhmaṇas are the intellectuals who can understand the Supreme Personality of Godhead. They are always engaged in the cultivation of knowledge. It does not matter whether one is born in India or outside India. Those who are naturally very heroic and who tend to rule over others are called kṣatriyas. Those who tend to produce food by agricultural methods, protect cows and other animals and engage in trade are called vaiśyas, or merchants. Those who are not sufficiently intelligent to be brāhmaṇas, kṣatriyas or vaiśyas are required to serve a master and are called śūdras. Thus everyone can engage in the service of the Lord and awaken his natural Kṛṣṇa consciousness. If a society does not function according to such natural divisions, the social orders become degraded. The conclusion is that the scientific method of varṇāśrama-dharma should be adopted by society.