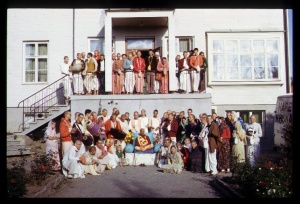 My dear King, when great sages and saintly persons saw mutually disrespectful dealings at the beginning of Tretā-yuga, Deity worship in the temple was introduced with all paraphernalia.

"Whatever result one obtained in Satya-yuga by meditating on Viṣṇu, in Tretā-yuga by performing sacrifices and in Dvāpara-yuga by serving the Lord's lotus feet one can also obtain in Kali-yuga simply by chanting the Hare Kṛṣṇa mahā-mantra." In Satya-yuga, every person was spiritually advanced, and there was no envy between great personalities. Gradually, however, because of material contamination with the advance of the ages, disrespectful dealings appeared even among brāhmaṇas and Vaiṣṇavas. Actually, an advanced Vaiṣṇava is to be respected more than Viṣṇu. As stated in the Padma Purāṇa, ārādhanānāṁ sarveṣāṁ viṣṇor ārādhanaṁ param: of all kinds of worship, worship of Lord Viṣṇu is the best. Tasmāt parataraṁ devi tadīyānāṁ samarcanam: and recommended more than worship of Viṣṇu is worship of the Vaiṣṇava.

Formerly, all activities were performed in connection with Viṣṇu, but after Satya-yuga there were symptoms of disrespectful dealings among Vaiṣṇavas. Śrīla Bhaktivinoda Ṭhākura has said that a Vaiṣṇava is he who has helped others become Vaiṣṇavas. An example of one who has converted many others into Vaiṣṇavas is Nārada Muni. A powerful Vaiṣṇava who has converted others into Vaiṣṇavas is to be worshiped, but because of material contamination, sometimes such an exalted Vaiṣṇava is disrespected by other, minor Vaiṣṇavas. When great saintly persons saw this contamination, they introduced worship of the Deity in the temple. This began in Tretā-yuga and was especially prominent in Dvāpara-yuga (dvāpare paricaryāyāṁ). But in Kali-yuga, worship of the Deity is being neglected. Therefore chanting of the Hare Kṛṣṇa mantra is more powerful than Deity worship. Śrī Caitanya Mahāprabhu set a practical example in that He did not establish any temples or Deities, but He profusely introduced the saṅkīrtana movement. Therefore Kṛṣṇa consciousness preachers should give more stress to the saṅkīrtana movement, especially by distributing transcendental literature more and more. This helps the saṅkīrtana movement. Whenever there is a possibility to worship the Deity, we may establish many centers, but generally we should give more stress to the distribution of transcendental literature, for this will be more effective in converting people to Kṛṣṇa consciousness.

"A person who is very faithfully engaged in the worship of the Deity in the temple but does not know how to behave toward devotees or people in general is called a prākṛta-bhakta, or kaniṣṭha-adhikārī." A prākṛta devotee, or neophyte devotee, is still on the material platform. He certainly engages in worshiping the Deity, but he cannot appreciate the activities of a pure devotee. It has actually been seen that even an authorized devotee who is engaged in the service of the Lord by preaching the mission of Kṛṣṇa consciousness is sometimes criticized by neophyte devotees. Such neophytes are described by Viśvanātha Cakravartī Ṭhākura: sarva-prāṇi-sammānanāsamarthānām avajñā spardhādimatāṁ tu bhagavat-pratimaiva pātram ity āha. For those who cannot properly appreciate the activities of authorized devotees, Deity worship is the only way for spiritual advancement. In the Caitanya-caritāmṛta (CC ''Antya'' 7.11) it is clearly said, kṛṣṇa-śakti vinā nahe tāra pravartana: without being authorized by Kṛṣṇa, one cannot preach the holy name of the Lord throughout the entire world. Nevertheless, a devotee who does so is criticized by neophyte devotees, kaniṣṭha-adhikārīs, who are on the lower stages of devotional service. For them, Deity worship is strongly recommended.