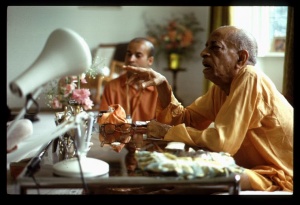 Whatever result was obtained in Satya-yuga by meditating on Viṣṇu, in Tretā-yuga by performing sacrifices, and in Dvāpara-yuga by serving the Lord's lotus feet can be obtained in Kali-yuga simply by chanting the Hare Kṛṣṇa mahā-mantra.

"Whatever is achieved by meditation in Satya-yuga, by the performance of sacrifice in Tretā-yuga, and by the worship of Lord Kṛṣṇa's lotus feet in Dvāpara-yuga is obtained in the age of Kali simply by glorifying the name of Lord Keśava."

Śrīla Jīva Gosvāmī has further quoted from the Brahma-vaivarta Purāṇa concerning the degraded condition of people in Kali-yuga:

"Thus in the age of Kali the practices of austerity, yoga meditation, Deity worship, sacrifice and so on, along with their various subsidiary functions, are not properly carried out, even by the most expert embodied souls.

Śrīla Jīva Gosvāmī has also cited the Cāturmāsya-māhātmya of the Skanda Purāṇa concerning the necessity of chanting Hare Kṛṣṇa in this age:

"In this way the most perfect penance to be executed in this world is the chanting of the name of Lord Śrī Hari. Especially in the age of Kali, one can satisfy the Supreme Lord Viṣṇu by performing saṅkīrtana. In conclusion, massive propaganda should be made all over the world to induce people to chant the Hare Kṛṣṇa mantra, by which human society can be rescued from the dangerous ocean of the age of Kali.

Thus end the purports of the humble servants of His Divine Grace A.C. Bhaktivedanta Swami Prabhupāda to the Twelfth Canto, Third Chapter, of the Śrīmad-Bhāgavatam, entitled "The Bhūmi-gītā."