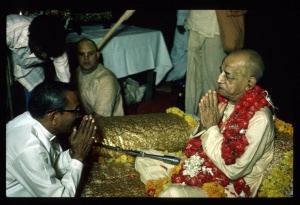 Indra replied: My dear mother, because I was grossly blinded by selfish interests, I lost sight of religion. When I understood that you were observing a great vow in spiritual life, I wanted to find some fault in you. When I found such a fault, I entered your womb and cut the embryo to pieces.

When Diti, Indra's aunt, explained to Indra without reservations what she had wanted to do, Indra explained his intentions to her. Thus both of them, instead of being enemies, freely spoke the truth. This is the qualification that results from contact with Viṣṇu. As stated in Śrīmad-Bhāgavatam (SB 5.18.12):

If one develops a devotional attitude and becomes purified by worshiping the Supreme Lord, all the good qualities are certainly manifested in his body. Because of being touched by worship of Viṣṇu, both Diti and Indra were purified.