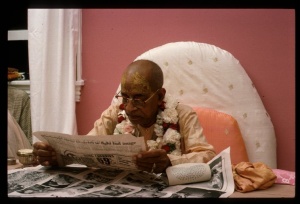 That very Śrīmad-Bhāgavatam I shall recite before you because you are the most sincere devotee of Lord Kṛṣṇa. One who gives full attention and respect to hearing Śrīmad-Bhāgavatam achieves unflinching faith in the Supreme Lord, the giver of salvation.

Śrīmad-Bhāgavatam is recognized Vedic wisdom, and the system of receiving Vedic knowledge is called avaroha-panthā, or the process of receiving transcendental knowledge through bona fide disciplic succession. For advancement of material knowledge there is a need for personal ability and researching aptitude, but in the case of spiritual knowledge, all progress depends more or less on the mercy of the spiritual master. The spiritual master must be satisfied with the disciple; only then is knowledge automatically manifest before the student of spiritual science. The process should not, however, be misunderstood to be something like magical feats whereby the spiritual master acts like a magician and injects spiritual knowledge into his disciple, as if surcharging him with an electrical current. The bona fide spiritual master reasonably explains everything to the disciple on the authorities of Vedic wisdom. The disciple can receive such teachings not exactly intellectually, but by submissive inquiries and a service attitude. The idea is that both the spiritual master and the disciple must be bona fide. In this case, the spiritual master, Śukadeva Gosvāmī, is ready to recite exactly what he has learned from his great father Śrīla Vyāsadeva, and the disciple, Mahārāja Parīkṣit, is a great devotee of Lord Kṛṣṇa. A devotee of Lord Kṛṣṇa is he who believes sincerely that by becoming a devotee of the Lord one becomes fully equipped with everything spiritual. This teaching is imparted by the Lord Himself in the pages of the Bhagavad-gītā, in which it is clearly described that the Lord (Śrī Kṛṣṇa) is everything, and that to surrender unto Him solely and wholly makes one the most perfectly pious man. This unflinching faith in Lord Kṛṣṇa prepares one to become a student of Śrīmad-Bhāgavatam, and one who hears Śrīmad-Bhāgavatam from a devotee like Śukadeva Gosvāmī is sure to attain salvation at the end, as Mahārāja Parīkṣit did. The professional reciter of Śrīmad-Bhāgavatam and the pseudodevotees whose faith is based on one week's hearing are different from Śukadeva Gosvāmī and Mahārāja Parīkṣit. Śrīla Vyāsadeva explained Śrīmad-Bhāgavatam unto Śukadeva Gosvāmī from the very beginning of the janmādy asya (SB 1.1.1) verse, and so Śukadeva Gosvāmī also explained it to the king. Lord Kṛṣṇa is described as the Mahāpuruṣa in the Śrīmad-Bhāgavatam (Canto Eleven) in His devotional feature as Lord Śrī Caitanya Mahāprabhu. Śrī Caitanya Mahāprabhu is Lord Kṛṣṇa Himself in His devotional attitude, descended on earth to bestow special favors upon the fallen souls of this age of Kali. There are two verses particularly suitable to offer as prayers to this Mahāpuruṣa feature of Lord Kṛṣṇa.