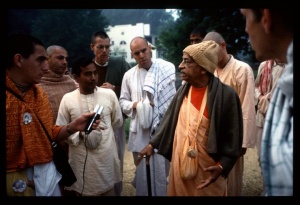 O King, one who has given up all material duties and has taken full shelter of the lotus feet of Mukunda, who offers shelter to all, is not indebted to the demigods, great sages, ordinary living beings, relatives, friends, mankind or even one's forefathers who have passed away. Since all such classes of living entities are part and parcel of the Supreme Lord, one who has surrendered to the Lord's service has no need to serve such persons separately.

One who has not fully surrendered to the devotional service of the Lord undoubtedly has many material duties to perform. Every ordinary conditioned soul is the recipient of innumerable benefits given by the demigods, who provide sun and moonshine, rain, wind, food and, ultimately, one's own material body. In Bhagavad-gītā it is stated, stena eva saḥ: (BG 3.12) one who does not reciprocate with the demigods by offering them sacrifice is stena, or a thief. Similarly, other living entities such as cows are providing us with innumerable delicious and nutritious foodstuffs. When we wake up in the morning our mind is refreshed by the sweet singing of birds, and on a hot day we enjoy the cool shade and breeze of the forest trees. We are accepting service from innumerable living entities, and we are obligated to repay them. Āpta means one's own family members, to whom one is certainly obligated according to normal morality, and nṛṇām means human society. Until one becomes a devotee of the Supreme Personality of Godhead, one is certainly a product of his society. We receive mundane education, culture, tradition and protection from the society in which we live, and thus we owe a great debt to society. Of course, our debt to society is not simply to the present order but to all of our forefathers and ancestors who carefully preserved moral and social customs so that we, their descendants, could live peacefully. Therefore the word pitṟṇām, or "forefathers," indicates our debt to previous generations.

In fact, the members of the Kṛṣṇa consciousness society are sometimes criticized by materialistic persons for giving too much attention to Kṛṣṇa rather than working to fulfill all of the above-mentioned obligations. In reply to this, the Śrīmad-Bhāgavatam (4.31.14) states, yathā taror mūla-niṣecanena tṛpyanti tat-skandha-bhujopaśākhāḥ. If one waters the root of a tee, automatically all of the branches, twigs, leaves, etc., are also nourished. There is no need for, nor any effectiveness in, separately pouring water on the branches, twigs and leaves of a tree. The water has to be placed on the root. Similarly, prāṇopahārāc ca yathendriyāṇām: food must be placed in the stomach, from where it is automatically distributed to all of the limbs of the body. It is foolish to try to nourish the whole body by rubbing food separately on all the bodily limbs. Similarly, the Supreme Personality of Godhead, Kṛṣṇa, is the source of all existence. Everything is emanating from Kṛṣṇa, everything is maintained by Kṛṣṇa, and at the end, everything will merge to rest in Kṛṣṇa. The Supreme Personality of Godhead, Kṛṣṇa, is the supreme benefactor, friend, protector and well-wisher of every living entity, and if He is satisfied, then automatically the whole world will become satisfied, just as all of the bodily limbs are strengthened and satisfied when food is duly remitted to the stomach.

The example can be given that a man who is working as the personal secretary to a great king has no further obligation to petty minor kings. Undoubtedly an ordinary person has many obligations within this material world. But according to Bhagavad-gītā, mayaiva vihitān hi tān: it is actually the Supreme Lord who is giving all benedictions. For example, one receives one's body by the mercy of one's parents. However, sometimes we find that a particular man or woman may become impotent at a given moment. Sometimes a deformed child is born, and sometimes a child is born dead. Often the sexual act fails to produce pregnancy at all. So although all parents desire a beautiful, highly qualified child, this is often not the case. Thus it can be understood that ultimately it is by the mercy of the Supreme Lord that a man and woman are able to produce a child by the sexual act. It is by the Lord's mercy that the man's seminal injection is potent and the woman's ovum is fertile. Similarly, it is only by the mercy of the Lord that the child is born in a healthy condition and reaches physical maturity to pursue his own life. If at any stage in the evolution of a human being the Lord's mercy is withdrawn, sudden death or crippling disease occurs.

The demigods are also not independent. The words parihṛtya kartam, "giving up other duties," indicate that one should give up any concept that the demigods are separate from Kṛṣṇa. It is clearly stated in Vedic literature that the demigods are different limbs of the universal body of the Supreme Lord. Further, it is stated in Bhagavad-gītā that the Supreme Lord is situated in everyone's heart and that He only is giving intelligence and memory. Thus, our forefathers who carefully preserved cultural traditions were acting with intelligence provided by the Supreme Lord. They certainly were not acting with their own independent intelligence. No one can be intelligent without a brain, and it is only by Kṛṣṇa's mercy that we receive a human brain. Therefore, if we carefully analyze all of our multifarious obligations toward different classes of living entities, we shall find that in each and every case it is ultimately by the mercy of the Supreme Personality of Godhead that we have received a particular benediction in life. So although an ordinary person must methodically fulfill all of his various obligations by executing different types of sacrifices and charitable activities for the satisfaction of those who have benefited him, one who is directly serving the Supreme Personality of Godhead, Kṛṣṇa, at once fulfills all such obligations because all benedictions ultimately have come from the Lord through the agency of family, forefathers, demigods, etc.

People in general are only eager to receive benedictions from demigods, family members and society because such benedictions are conducive to material sense gratification. Less intelligent persons consider such material progress to be the only goal of life and thus cannot appreciate the exalted position of pure devotional service to the Lord. Bhakti-yoga, or pure devotional service, is meant to directly please the senses of the Supreme Personality of Godhead. Envious materialistic persons propose various arguments to deny that the Supreme Lord even has transcendental senses. The devotees, however, do not waste!time doubting the inconceivable beauty, strength, wealth and geniality of the Supreme Personality of Godhead, but directly please the Lord's senses through loving service and thus receive the supreme benediction of going back home, back to Godhead. The devotees return to the Lord's abode, where life is eternal, full of bliss and knowledge. No demigod, family member or forefather can give one an eternal life of bliss and knowledge. However, if one foolishly neglects the lotus feet of the Supreme Lord and instead accepts the temporary material body to be everything, then one must certainly perform elaborate sacrifices, austerities and charity and fulfill all of the obligations mentioned above. Otherwise, one becomes completely sinful and condemned, even from the material point of view.