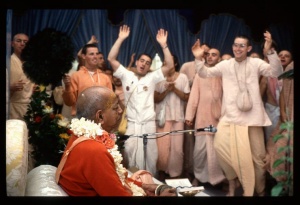 As long as one is not satiated by fruitive activity and has not awakened his taste for devotional service by śravaṇaṁ kīrtanaṁ viṣṇoḥ (SB 7.5.23) one has to act according to the regulative principles of the Vedic injunctions.

Unless one has developed firm faith in Lord Kṛṣṇa by association with pure devotees and is thus engaged full time in the devotional service of the Lord, one should not neglect ordinary Vedic principles and duties. As stated by the Lord Himself,

"The śruti and smṛti literatures are to be understood as My injunctions, and one who violates such codes is to be understood as violating My will and thus opposing Me. Although such a person may claim to be My devotee, he is not actually a Vaiṣṇava." The Lord here states that if one has not developed firm faith in the process of chanting and hearing, one must comply with the ordinary injunctions of Vedic literatures. There are many symptoms by which one can recognize an advanced devotee of the Lord. In the First Canto of Śrīmad-Bhāgavatam (SB 1.2.7) it is stated

One who is actually engaged in advanced devotional service immediately develops both clear knowledge of Kṛṣṇa consciousness and detachment from nondevotional activities. One who is not situated on this platform must comply with the ordinary injunctions of Vedic literature or risk becoming inimical to the Supreme Personality of Godhead. On the other hand, one who has developed great faith in the devotional service of Lord Kṛṣṇa does not hesitate to do anything that will further the mission of the Lord. As stated in the Eleventh Canto of Śrīmad-Bhāgavatam (SB 11.5.41),

"Anyone who has taken shelter of the lotus feet of Mukunda, the giver of liberation, giving up all kinds of obligation, and has taken to the path in all seriousness, owes neither duties nor obligations to the demigods, sages, general living entities, family members, humankind or forefathers."

Śrīla Jīva Gosvāmī points out in this regard that when a person fully surrenders to Lord Kṛṣṇa, he takes shelter of the Lord's promise to liquidate all other responsibilities and debts of the surrendered soul. The devotee thus becomes fearless by meditating on the Lord's promise of protection. Those, however, who are materially attached are frightened by the prospect of full surrender to the Supreme Personality of Godhead, thereby revealing their inimical mentality toward the Lord.