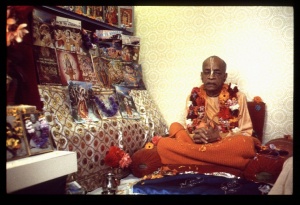 One should know the ācārya as Myself and never disrespect him in any way. One should not envy him, thinking him an ordinary man, for he is the representative of all the demigods.

"This is a verse from Śrīmad-Bhāgavatam (SB 11.17.27) spoken by Lord Śrī Kṛṣṇa when He was questioned by Uddhava regarding the four social and spiritual orders of society. He was specifically instructing how a brahmacārī should behave under the care of a spiritual master. A spiritual master is not an enjoyer of facilities offered by his disciples. He is like a parent. Without the attentive service of his parents, a child cannot grow to manhood; similarly, without the care of the spiritual master one cannot rise to the plane of transcendental service.

"Only out of His immense compassion does the Personality of Godhead reveal Himself as the spiritual master. Therefore in the dealings of an ācārya there are no activities but those of transcendental loving service to the Lord. He is the Supreme Personality of Servitor Godhead. It is worthwhile to take shelter of such a steady devotee, who is called āśraya-vigraha, or the manifestation or form of the Lord of whom one must take shelter.

"If one poses himself as an ācārya but does not have an attitude of servitorship to the Lord, he must be considered an offender, and this offensive attitude disqualifies him from being an ācārya. The bona fide spiritual master always engages in unalloyed devotional service to the Supreme Personality of Godhead. By this test he is known to be a direct manifestation of the Lord and a genuine representative of Śrī Nityānanda Prabhu. Such a spiritual master is known as ācāryadeva. Influenced by an envious temperament and dissatisfied because of an attitude of sense gratification, mundaners criticize a real ācārya. In fact, however, a bona fide ācārya is nondifferent from the Personality of Godhead, and therefore to envy such an ācārya is to envy the Personality of Godhead Himself. This will produce an effect subversive to transcendental realization.

"As mentioned previously, a disciple should always respect the spiritual master as a manifestation of Śrī Kṛṣṇa, but at the same time one should always remember that a spiritual master is never authorized to imitate the transcendental pastimes of the Lord. False spiritual masters pose themselves as identical with Śrī Kṛṣṇa in every respect, to exploit the sentiments of their disciples, but such impersonalists can only mislead their disciples, for their ultimate aim is to become one with the Lord. This is against the principles of the devotional cult.