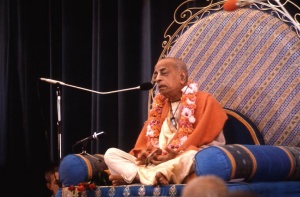 Seeing a head decorated with earrings lying at the gate of the royal palace, the people present were puzzled. Some of them asked, "What is this?" and others said, "It is a head, but whose is it?"

Śrīla Prabhupāda writes as follows: "When the head of the King of Kāśī was thrown through the city gate, people gathered and were astonished to see that wonderful thing. When they found out that there were earrings on it, they could understand that it was someone's head. They conjectured as to whose head it might be. Some thought it was Kṛṣṇa's head because Kṛṣṇa was the enemy of Kāśirāja, and they calculated that the King of Kāśī might have thrown Kṛṣṇa's head into the city so that the people might take pleasure in the enemy's having been killed. But it was finally detected that the head was not Kṛṣṇa's but that of Kāśirāja himself. "