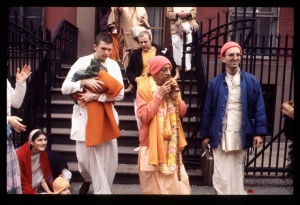 Lord Hari laughed heartily when He saw how the King had dressed up in exact imitation of His own appearance, just like an actor on a stage.

Śrīla Prabhupāda describes this scene as follows: "On the whole, [Pauṇḍraka's] dress and makeup were clearly imitation. Anyone could understand that he was just like someone on a stage playing the part of Vāsudeva in false dress. When Lord Śrī Kṛṣṇa saw Pauṇḍraka imitating His posture and dress, He could not check His laughter, and thus He laughed with great satisfaction."

Śrīla Jīva Gosvāmī points out that it was a benediction from Lord Śiva that enabled Pauṇḍraka to imitate the Lord's dress and appearance exactly—a fact gleaned from the Uttara-khaṇḍa of Śrī Padma Purāṇa.