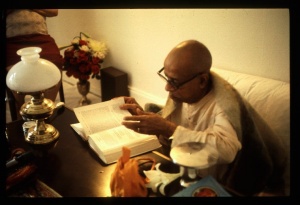 O girls! The dust of Govinda's lotus feet is so sacred that even Brahmā, Śiva and the goddess Ramā take that dust upon their heads to dispel sinful reactions.

According to Śrīla Viśvanātha Cakravartī, who quotes from śāstra, each day in the late afternoon, as Kṛṣṇa returned from the cow pastures with His cowherd boyfriends, great demigods like Brahmā and Śiva would come down from heaven and take the dust of His feet.

Great personalities like the goddess Ramā (the wife of Viṣṇu), Śiva and Brahmā are not at all sinful. But in the ecstasy of pure Kṛṣṇa consciousness they feel themselves fallen and impure. Thus, desiring to purify themselves, they blissfully take the dust of the Lord's lotus feet on their heads.