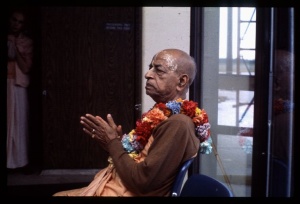 Sūta Gosvāmī said: O son of Bhṛgu [Śaunaka Ṛṣi], after Śukadeva Gosvāmī, the most respectable devotee, the son of Vyāsadeva, heard the pious questions of Mahārāja Parīkṣit, he thanked the King with great respect. Then he began to discourse on topics concerning Kṛṣṇa, which are the remedy for all sufferings in this age of Kali.

In this verse the words kṛṣṇa-caritaṁ kali-kalmaṣa-ghnam indicate that the activities of Lord Kṛṣṇa are certainly the greatest panacea for all miseries, especially in this age of Kali. It is said that in Kali-yuga people have only short lives, and they have no culture of spiritual consciousness. If anyone is at all interested in spiritual culture, he is misled by many bogus svāmīs and yogīs who do not refer to kṛṣṇa-kathā. Therefore most people are unfortunate and disturbed by many calamities. Śrīla Vyāsadeva prepared Śrīmad-Bhāgavatam at the request of Nārada Muni in order to give relief to the suffering people of this age (kali-kalmaṣa-ghnam). The Kṛṣṇa consciousness movement is seriously engaged in enlightening people through the pleasing topics of Śrīmad-Bhāgavatam. All over the world, the message of Śrīmad-Bhāgavatam and Bhagavad-gītā is being accepted in all spheres of life, especially in advanced, educated circles.

Śrīla Śukadeva Gosvāmī is described in this verse as bhāgavata-pradhānaḥ, whereas Mahārāja Parīkṣit is described as viṣṇu-rātam. Both words bear the same meaning; that is, Mahārāja Parīkṣit was a great devotee of Kṛṣṇa, and Śukadeva Gosvāmī was also a great saintly person and a great devotee of Kṛṣṇa. Combined together to present kṛṣṇa-kathā, they give great relief to suffering humanity.

"The material miseries of the living entity, which are superfluous to him, can be directly mitigated by the linking process of devotional service. But the mass of people do not know this, and therefore the learned Vyāsadeva compiled this Vedic literature, Śrīmad-Bhāgavatam, which is in relation to the Supreme Truth." (SB 1.7.6) People in general are unaware that the message of Śrīmad-Bhāgavatam can give all of human society relief from the pangs of Kali-yuga (kali-kalmaṣa-ghnam).