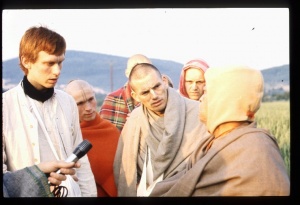 The material miseries of the living entity, which are superfluous to him, can be directly mitigated by the linking process of devotional service. But the mass of people do not know this, and therefore the learned Vyāsadeva compiled this Vedic literature, which is in relation to the Supreme Truth.

Śrīla Vyāsadeva saw the all-perfect Personality of Godhead. This statement suggests that the complete unit of the Personality of Godhead includes His parts and parcels also. He saw, therefore, His different energies, namely the internal energy, the marginal energy and the external energy. He also saw His different plenary portions and parts of the plenary portions, namely His different incarnations also, and he specifically observed the unwanted miseries of the conditioned souls, who are bewildered by the external energy. And at last he saw the remedial measure for the conditioned souls, namely, the process of devotional service. It is a great transcendental science and begins with the process of hearing and chanting the name, fame, glory, etc., of the Supreme Personality of Godhead. Revival of the dormant affection or love of Godhead does not depend on the mechanical system of hearing and chanting, but it solely and wholly depends on the causeless mercy of the Lord. When the Lord is fully satisfied with the sincere efforts of the devotee, He may endow him with His loving transcendental service. But even with the prescribed forms of hearing and chanting, there is at once mitigation of the superfluous and unwanted miseries of material existence. Such mitigation of material affection does not wait for development of transcendental knowledge. Rather, knowledge is dependent on devotional service for the ultimate realization of the Supreme Truth.