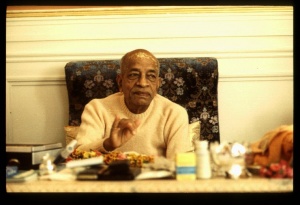 Prabhupāda: . . . forest, naked, renounced, eating fruits, but debauch number one. Markaṭa-vairāgya. There are so many vairāgīs. Markaṭa. Bhaktivinoda Ṭhākura has said, ei 'ta kali-celā: here is a disciple of Kali. Nāke tilaka galāi mālā: but has got a tilaka on the forehead and neckbeads on the neck, but is kali-celā—number one disciple of Kali. You know this song? This is going on. Kali-celā. These persons who are committing sinful life—don't say anyone (laughs) or publish—there will be trouble. But that's a fact. Those who are living in Vṛndāvana and acting like monkey, they'll get next life a monkey, to remain in Vṛndāvana, and then next life they will be liberated. In one life all their sinful activities will be punished. Because as soon as animal life is obtained, there is no more further record of the sinful life. The animals cannot make sinful activities more than what is destined by him. But their sinful activity is not taken into account. For this man who is offered this monkey's body, he suffers the inconvenience of monkey life. So his sinful activities are counteracted, and because he came to Vṛndāvana and lived in Vṛndāvana by the mercy of Rādhārāṇī, next life he will be . . . that is the glory of Vṛndāvana-dhāma. Otherwise, what is the explanation of these dogs and hogs and monkeys in Vṛndāvana? If it is dhāma-aparādha, committing offense in dhāma . . . dhāma-aparādha. As dhāma-bhajana, if one undergoes devotional service out of Vṛndāvana and one executes devotional service in Vṛndāvana, that is hundred times better. Similarly, dhāma-aparādha also. This aparādha, when offense is committed outside Vṛndāvana, that is not so grievous as committing offense in Vṛndāvana. Dhāma-aparādha.

So the punishment is there, but the reward is also there. One life makes pardoned. Tat te 'nukampāṁ su-samīkṣamāṇo bhuñjāna evātma-kṛtaṁ vipākam (SB 10.14.8). Therefore a devotee in a reverse condition of life, he understands that "I am punished, little punished for my previous mischievous activities. So now I am becoming liberated." So he becomes more enthused to worship the Lord, that "You are finishing my sinful reaction of life with slight punishment. Thank you very much." This is devotee. Tat te 'nukampāṁ su-samīkṣamāṇaḥ.

Harikeśa: The dogs and the monkeys, they feel grateful?

Prabhupāda: Yes, when they come to sense they feel grateful. As dogs they cannot. As dog or monkey they cannot enhance their sinful activities. It is stopped. And whatever they do, that is not taken into account. And to suffer as dog or monkey means counteracting all previous sins. One punishment finished. Then he's fully liberated.

Harikeśa: I was always wondering that if somebody's desire is to commit sinful activities . . .

Harikeśa: If they desire to commit sinful activities, and before they became monkeys, but then they were doing it then. So whilst they're monkeys their desire must change. Or is it forced, that change forced upon them by the mercy of Kṛṣṇa?

Prabhupāda: But if desire changes, then where is punishment? If he's repentant, then there is no punishment.

Harikeśa: So before they go back to the spiritual world that desire must change.

Prabhupāda: This is forceful change.

Prabhupāda: That is the advantage of Vṛndāvana bhajana.

Harikeśa: That is very good. (laughs)

Prabhupāda: But not that willfully do something wrong. That is punishment. There is punishment. If one unconsciously, without any knowledge, does something wrong, that is excused. But they do willfully. They know it is wrong, still they do it. That is punished. Knowingly. Caitanya Mahāprabhu personally said, asat eka strī-saṅgī (CC Madhya 22.87). Those who are habituated to illicit sex are punishable. Asat. It is very, very bad. And still if somebody does like that, he is punished. This is going on: "All right." Here, illicit sex . . . the bābājīs, I heard, they say, "What is the wrong there? It is love." They say like that. They take it as love. "Gopīs' love," they say. "Gopīs used to do that, used to have illicit mixing, intermingling with Kṛṣṇa. What is wrong?" They'll say. They get support from kṛṣṇa-līlā. Such rogues they are. Sahajiyās. There are many so-called gentlemen, they write books on kṛṣṇa-līlā, paint picture. "This is very nice. Kṛṣṇa is advocating illicit intermingling." They take it as support of their sinful activities. I have seen personally, anyone who is a woman-hunter, he's being addressed by his friend, "Oh, you are like Kṛṣṇa." They take Kṛṣṇa as a man. How they will take instruction of Kṛṣṇa? Avajānanti māṁ mūḍhāḥ, paraṁ bhāvam ajānantaḥ (BG 9.11). We are teaching people to become Kṛṣṇa conscious, to become servant of Kṛṣṇa, and the so-called gentlemen, enlightened gentlemen, take Kṛṣṇa as a debauch, black debauch.

Prabhupāda: . . . Vaiṣṇava religion is sex. (break) There are aborigines in India, Santal. They are called Santal. Black men, live in the forest like the African aborigines. So I asked him that "You, jungle, do you meet the tigers?" "Oh, yes, yes. Why not?" "So how do you save yourself?" So he had a small ax in his hand. So he showed me that "So long I have got this ax, even the tiger will not dare to attack me." (Bengali or Hindi) So after all, tiger is afraid of the ax. They are afraid of even stick. That immediately they understand, "He's superior." Actually, man is superior with some weapon. I have got personal experience. He said, "He's a big tiger. But we treat them like dogs." One ax. They keep always. Just like we keep a stick, they keep one ax.

Harikeśa: Last year they bit Upendra. Remember that? Upendra went to Sevā-kuñja and the monkeys came and took away all of his prasādam and bit him in the leg.

Prabhupāda: Ācchā? Many monkeys were deported by the government, but people protested. They were capturing monkeys . . .

Prabhupāda: Yes. Government. And selling at good price in Europe for taking their hormone. The monkey's hormones is injected or replaced so one regains his sex power. They are very sexually strong.

Harikeśa: That must interfere with their monkey's spiritual life.

Harikeśa: That interferes with the spiritual life of the monkey? Because then he can't die in Vṛndāvana.

Prabhupāda: It is further from them. Everything is being done by superior arrangement. karmaṇā daiva-netreṇa (SB 3.31.1). People should learn all these things by practical example instead of becoming irresponsible and without any obedience to the superior law. They should learn it, but they have no intelligence. They think, "We are all free." Wherefrom the monkey is coming, why there are so many varieties of life, how it is . . .? What do they know? Nothing. All bluff, vague explanation, and that is going on in the name of science. This is the position. All rascals. Fortunately we have got this Śrīmad-Bhāgavatam and Bhagavad-gītā. All knowledge. First-class knowledge. (break) . . . eternally enjoyment. For him everything, ānandamayo 'bhyāsāt (Vedānta-sūtra 1.1.12). Everything ānanda. He has no such thing that "This is harmful," "This is useful." That is Kṛṣṇa. Because nobody can do harm to Him, and neither in the spiritual world, anyone is harmful. Everyone is advanced devotee. Even the tigers, they are also devotees.

Prabhupāda: Varieties are there.

Hari-śauri: They have tigers and serpents and everything like that?

Prabhupāda: Everything. They are all devotees.

Harikeśa: There are no dogs and hogs.

Prabhupāda: Yes. The hogs may be also there.

Hari-śauri: Hogs are there as well? (laughs)