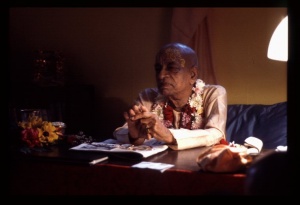 Translation: (02:11) "It was by Droṇācārya's mercy that you learned the military art of throwing arrows and the confidential art of controlling weapons."

This is also another Vedic civilization, that if you are benefited by somebody, you should always remain obliged to him. Śikṣito yad-anugrahāt. There is one Bengali proverb, guru-māra-vidyā: "Guru, you learn from him first of all, then kill him. Don't care for guru." This is demonic. By the grace of guru you learn something; then when you learn something, then you become greater than him, don't care for guru. This is demonic. Even if you have learned something, you must feel always obliged, ataḥ padarśayat(?).

So this is Vedic civilization. Draupadī advising Arjuna that "You have learned this military art, by his grace, by guru's grace, now you are expert in the science of military art. And suppose his son has committed some sinful activity. You cannot punish him, retaliate, so that guru's family will be aggrieved." This is Vedic culture. "Not only he is personally, but in his absence, his wife, his family, you should consider them." So there is nothing about . . . What is the purport? Read.

Pradyumna: "Dhanur-veda, or military science, was taught by Droṇācārya with all its confidential secrets of throwing and controlling by Vedic hymns. Gross military science is dependent on material weapons, but finer than that is the art of throwing arrows saturated with Vedic hymns, which act more effectively than gross material weapons like machine guns or atomic bombs. The control is by Vedic mantras, or the transcendental science of sound. It is said in the Rāmāyaṇa that Mahārāja Daśaratha, the father of Lord Śrī Rāma, used to control arrows by sound only. He could pierce his target with his arrow by hearing the sound only, without seeing the object. So this is a finer military science than that of the gross material military weapons . . ."

Pradyumna: "So this is a finer military science than that of the gross material military weapons used nowadays. Arjuna was taught all this, and therefore Draupadī wished that Arjuna feel obliged to Ācārya Droṇa for all these benefits. And in the absence of Droṇācārya, his son was the representative. That was the opinion of the good lady Draupadī. It may be argued why Droṇācārya, a rigid brāhmaṇa, should be a teacher in military science. But the reply is that a brāhmaṇa should become a teacher, regardless of what his department of knowledge is. A learned brāhmaṇa should become a teacher, a priest and a recipient of charity. A bona fide brāhmaṇa is authorized to accept such professions."

Prabhupāda: So there is nothing especial to be explained. The only important part of this verse is, that don't learn guru-māra-vidyā. Even if you become more learned that your guru, you should not exhibit it before your guru. You should always remain a fool number one. Just like Caitanya Mahāprabhu showed Himself by His example: guru more mūrkha dekhi 'karila śāsana (CC Adi 7.71). Caitanya Mahāprabhu was not mūrkha, but He has taught us that before guru, we shall always remain a mūrkha. That is advancement. Not that "I know more than guru. I don't care for guru. Now give me blessing that I can find out some better guru." This nonsense, if you don't find . . . If your guru is not perfect, then why you are asking blessing to find out another guru?

So anyway, this guru-māra-vidyā should be avoided. That is the instruction in this verse we can get, and that is the Vedic way. It is not that Draupadī is speaking, but Caitanya Mahāprabhu is also speaking - Caitanya Mahāprabhu was very strict on this point. As soon Vallabhācārya spoke that "I have written a better comment than Śrīdhara Svāmī," immediately Caitanya Mahāprabhu become offended. He said, "Oh, you have become more than Śrīdhara Svāmī? You don't care for Svāmī?" So he remarked immediately, svāmī yei jana na māne veśyara bhitare (CC Antya 7.115). That is the system. You cannot overrule ācārya. Ācārya . . . Ācāryopāsanam. Ācārya should be always worshiped. Even if you, by A-B-C-D, you have become more learned than the ācārya —that is not possible, but if you foolishly think like that, still - you should not exhibit your foolishness, that you know more than the ācārya. That is Caitanya Mahāprabhu's . . . By His life example He has taught us that the more we remain ignorant, foolish, before the ācārya or before the guru, that is more we advance. Real success is how one is faithful to his guru. That is real success. Yasya deve parā bhaktir yathā deve tathā gurau. It is not by education or grammatical knowledge you can learn anything. No. It is by the grace of the Supreme Personality of Godhead. And that grace comes down through the grace of guru. That grace also does not come directly. We should not be neglecting this point.

Therefore Viśvanātha Cakravartī Ṭhākura says, yasya prasādād bhagavat-prasādaḥ. Not that bhagavat-prasāda is achieved by education and grammar. No. Yasya prasādād bhagavat-prasādaḥ. By the mercy of guru one can achieve. That is just like a common word, "If you love me, love my dog." So you cannot approach Kṛṣṇa without loving His dog, His servant. Satāṁ prasaṅgāt. A person who is trying to distribute the message of Kṛṣṇa, he is very, very dear dog of Kṛṣṇa. Na ca tasmān manuṣyeṣu kaścin me priya-kṛttamaḥ (BG 18.69). Anyway, it doesn't matter how far he is advanced in education, how far he has learned grammar. These are not the things. The things is how far he is working to carry out the mission of Kṛṣṇa. Then one has to receive Kṛṣṇa's mercy through the bona fide servant. Kṛṣṇa cannot be bluffed by so-called education and grammar. Kṛṣṇa is not so . . . Bhaktyā mām abhijānāti (BG 18.55). He never says, "By grammar or by education one can understand." Never says. Bhaktyā mām abhijānāti yāvān yaś cāsmi tattvataḥ. We should be educated, we should be very careful, but real thing is bhakti. Anyābhi . . . Bhajate mām ananya-bhāk, sādhur eva sa mantavyaḥ (BG 9.30). Api cet su-durācāraḥ. Many places it is said. Tad-vāg-visargo janatāgha-viplavo yasmin prati-ślokam abaddhavaty api (SB 1.5.11). Even a bhakta writes something which is not very grammatically, rhetorically very correct . . . Tad-vāg-visargo janatāgha-viplavaḥ, nāmāny anantasya yaśo 'ṅkitāni. But because he has tried to broadcast the glories of the Lord, even not in perfect language, that is his qualification.

The sādhu, they are not interested about rhetorical or grammatical adjustment. The sādhu wants to see who has spoken. If he's a Vaiṣṇava, then his words will be accepted. Caitanya Mahāprabhu strictly prohibits that if one is not a Vaiṣṇava, don't hear from him. Avaiṣṇava-mukhodgīrṇaṁ pūtaṁ hari-kathāmṛtam, śravaṇaṁ naiva kartavyam (Padma Purāṇa). "But he's such a learned man," or "He's writes so nicely, correctly." But because he's not Vaiṣṇava, one should not hear from him. "Why? It is so nicely written." No. Sarpocchiṣṭaṁ yathā payaḥ (Padma Purāṇa). Milk is very good food, everyone knows. But as soon as it is touched by the lips of a serpent, it is poison immediately. Therefore it is forbidden. And one who has no knowledge how to respect guru, how he can become Vaiṣṇava? Chāḍiyā vaiṣṇava-sevā nistāra pāyeche kebā, Narottama dāsa Ṭhākura says. If you don't become a faithful servant of Vaiṣṇava, there is no possibility of your liberation. Chāḍiyā vaiṣṇava-sevā nistāra pāyecha kebā. Tāṅdera caraṇa-sevi-bhakta-sane vāsa, janame janame haya ei abhilāṣa. This is Narottama dāsa Ṭhākura. Our determination should be to serve the previous guru and ācārya. Evaṁ paramparā-prāptam (BG 4.2). That is our determination. Tāṅdera caraṇa-sevi. Our service, not directly Kṛṣṇa. Because to serve Vaiṣṇava is more than serving Kṛṣṇa directly. Mad-bhakta-pūjābhyadhikā (SB 11.19.21). Kṛṣṇa likes that. He doesn't accept anyone's service directly. That is a gross mistake. Therefore Narottama dāsa Ṭhākura is teaching us, tāṅdera . . . (break) . . . trying to become one with Kṛṣṇa or one with the gopīs. These are all Māyāvāda philosophy. Tāṅdera caraṇa-sevi. You have to serve the servant of Kṛṣṇa, tad bhṛtya dāsa-dāsa-dāsānudāsaḥ (CC Madhya 13.80). That is the way. Not directly.

So here Draupadī is reminding that yad-anugrahāt śikṣito bhavatā: "You are neglecting his, satisfying him. Do you think if you kill his son he'll be satisfied? Maybe his son is a criminal from all points of view; still, ultimately, if you kill his son he'll be aggrieved. That is natural. That is natural." There was, in Allahabad, it is our practical experience. Two brothers, all of a sudden they became angry. They fought one another. One brother was killed. The anger is so dangerous. So naturally, in the court he was ordered to be hanged. Then the father appealed to the court that "My one son is already killed, and the other, remaining son, if he is also killed, then what will be my condition?" So court considered this proposal, and the boy was ordered to be killed, he was saved. Yes. So this consideration is there even in ordinary way. And actually, these sons were rogues. They fought; one is killed, another is going to be killed. But this old man will be finished. The court considered it, and he was saved. He was not hanged; he was given some long duration of imprisonment. That we have seen. The same thing, the affection is everywhere. So Draupadī is giving the best instruction, that "By the mercy of Droṇācārya you have learned this art, and now this art you are going to use for killing his son? What is this logic?" Very good argument.

A similar argument was given by Duryodhana to Droṇācārya. Droṇācārya and this Draupadī's father, they became inimical. So he got a son, Uttara. No? Anyway, that son was meant for killing Droṇācārya. And at the same time, that son was a student of Droṇācārya in the art of military science. So Duryodhana reminded Droṇācārya that "This son, Virāṭa, Virāṭa Mahārāja's son, he is meant for killing you, and you have foolishly taught him the military science. Now he's using the military science to kill you." So there are so many instances like that, that sometimes this art, guru-māra-vidyā, is done by rascals and fools. That should not be done. That is the instruction from every practical point of view.