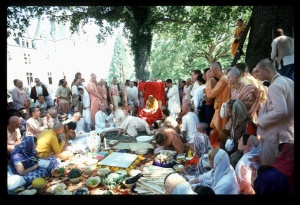 Mukti, liberation . . . the impersonalists think that simply by cultivating knowledge that, "I am not matter; I am spirit," or "I am one with the Supreme Spirit; I am now . . . out of ignorance, I am thinking different, but when I am fully elevated to the platform of knowledge, then I become liberated." But the . . . there is no answer that "Why you have become conditioned?"

So there is no answer for this question from the impersonalists' school. But real fact is that the Supreme never falls down. The part and parcel of the Supreme, they fall down—some of them—not all. So therefore the living entities, they are different from the Supreme. They are one in quality with the Supreme, but not in quantity.

So Lord Caitanya says that, "Simply by thinking that 'I am not this matter; I am spirit soul, ahaṁ brahmāsmi, I am Brahman,' that will not help you to get liberation." The real fact is that the individual living entities, they are part and parcel of the Supreme, but somehow or other, they wanted separation from the Supreme and wanted to lord it over the material nature.

Therefore they are entangled. That is the real fact. And as such, we find from the Bhagavad-gītā, the Lord asked that sarva-dharmān parityajya mām ekaṁ śaraṇaṁ vraja (BG 18.66): "Just surrender." So therefore, unless there is surrender of the individual soul to the Supreme, there is no question of liberation. There is no question of liberation. You can cultivate knowledge that, "I am not this body; I am spirit soul," but that will not help for your liberation. Because real thing is that you have or we have rebelled against the supremacy of the Supreme Lord.

That is the attitude, everywhere we can see actually. Everyone is, "Oh, what is God? What is God?" especially in this age. So this impersonalism is another type of atheism, and this impersonal theory of the Absolute Truth has converted practically the major portion of the world into atheism. So therefore Lord Caitanya says that simply by cultivation of knowledge that, "I am not this matter. I am not this matter. I am spirit soul," that will not help.

So Śrīmad-Bhāgavatam, although the Vaiṣṇavas, they have got their commentaries on Vedānta-sūtra, but this Caitanya Mahāprabhu's sampradāya, they did not make any commentary on the Vedānta-sūtra because they belonged to the disciplic succession of Vyāsadeva. So Vyāsadeva is the spiritual master. So the later ācārya, they did not think it proper that whatever the . . .

Because their spiritual master has had already made a commentary on the Vedānta-sūtra, "Oh, that is sufficient. Why should we do again?" These are some of the etiquettes. Anyway, the Vedānta-sūtra . . . and Bhāgavata is natural commentary on Vedānta-sūtra, and Lord Caitanya therefore gives evidence from the Bhāgavata generally, and Purāṇas also, Mahābhārata and anyway, I mean to say, Upaniṣad. They are all authorities. But especially He gives evidences from Śrīmad-Bhāgavatam.

Those who are engaged in transcendental loving service of Kṛṣṇa, for them knowledge automatically comes from within, because Kṛṣṇa is within us. So a sincere soul in Kṛṣṇa consciousness will not lack in knowledge. And in the Vedic literature also it is confirmed:

The Vedic knowledge, revelation, to whom it is revealed? It is revealed to a person who has unflinching faith and love for the Supreme Personality of Godhead as well as to the spiritual master. Yasya deve parā bhaktir yathā deve tathā gurau. As much he has got faith in the Supreme, similarly he has faith in the spiritual master. Such a person gets revelation of the Vedic knowledge from within.

So those who are actually serious in engaging themselves in Kṛṣṇa consciousness, devotional service, for them knowledge is secondary. Knowledge automatically revealed to them. And those who do not take to the Kṛṣṇa consciousness, devotional service, simply indulge in dry speculation, for them liberation is not possible. Not possible. So Lord Caitanya gives one evidence from Śrīmad-Bhāgavatam from Tenth Canto:

Real knowledge means to understand the last word of the Absolute Truth, the Supreme Personality of Godhead, and surrender unto Him, after knowledge. As it is confirmed in the Bhagavad-gītā, bahūnāṁ janmanām ante (BG 7.19): "After many, many births, one who is actually in knowledge, he surrenders."

So Śrīmad-Bhāgavata practically confirms the same, that śreyaḥ-sṛtiṁ bhaktim udasya te vibho. Any person who does not take to the devotional service in Kṛṣṇa consciousness, simply indulge in dry speculation, kliśyanti, takes trouble . . . kliśyanti means "takes trouble"; ye, "persons"; kevala-bodha-lab . . . simply to understand that, "This is not matter, this is not spirit, this is not . . ." like that, and that there is no separate Supersoul, only one soul is there, and this conception of individual soul is misunderstanding, ignorance—in this way, there are volumes of books of . . . by Śaṅkarācārya especially, and later on, his disciples.

They are very, very learned scholars, undoubtedly. By their scholastic jugglery they want to cover the Supreme Personality of God. They do not want to cover; they think that they are advanced. But Kṛṣṇa covers Himself so that they may not understand Kṛṣṇa. Kṛṣṇa does not want. Kṛṣṇa wants that one should surrender and take to devotional service.

So Kṛṣṇa says in the Bhagavad-gītā that nāhaṁ prakāśaḥ sarvasya yoga-māyā-samāvṛtaḥ (BG 7.25): "I do not reveal Myself to everyone, one and all. No. I cover Myself." So these impersonalist, due to their, I mean to say, less intelligence, or misfortune, they cannot see Kṛṣṇa. So therefore, for them this remark is here, that śreyaḥ-sṛtim, that "Actually what is auspicious, devotional service, if somebody gives that path away and takes to simply dry speculation, simply to understand . . ." Because jñāna means to understand what is the difference between matter and spirit. So they, of course, indulge in that process of knowledge.

But simply by that speculation the result is that teṣām asau kleśala eva śiṣyate (SB 10.14.4). The trouble which they accept for discriminating matter from spirit . . . there is trouble. You have to see so many Vedic literatures, and you have to understand the instruction of Upaniṣads and logic, and so many things there are to, I mean to say, back your understanding.

How it is? The example is, nānyad yathā sthūla-tuṣāvaghātinām: "Just like husking the grain to take out the skin." Now, there are many grains which are skin over. So there is process of taking out the skin out of the grain. So if the grain is already taken out, only the skins are left. Then, if you husk on it and beat to get out the grains, so there is no possibility to get any grains from them, because the grain is already taken out. So that is the trouble. Simply, I mean, beating the skin is no good. We must have some concrete result. That concrete result is one who is directly engaged in the transcendental service, loving service of the Supreme Lord. That is recommended.

So the same thing is confirmed in the Bhagavad-gītā, Seventh Chapter, that the Lord says that . . . this is also another influence of māyā, illusion. Just like under the spell of illusion we are thinking that "I am American," "I am Indian," "I am king," "I am big man," "I am poor man"—so many we have got—and this is all due to this body, bodily conception. It has no actual standing. It is all . . . they are all designation.

Similarly, the last snare of māyā is to, I mean to say, induce one to think that, "I am God." Just like we are under the spell of illusion. We are thinking, "I am this and that, this and that." So after many, many years' cultivation of knowledge, if one comes to the conclusion that "I am God. There is no other second God. I am God," so that is also another spell of illusion.

Just like we become . . . sometimes we take a pet dog with shackles on the neck, similarly we are under the spell . . . we are pet dogs of the illusory energy, with shackles. You see? So why? Now, 'kṛṣṇa-nitya-dāsa'-jīva tāhā bhuli' gela that, "The living entity is eternally servitor of the Supreme Lord, Kṛṣṇa. That he has forgotten." That he has forgotten. Therefore . . .

Therefore, if one agrees to serve Kṛṣṇa under the direction of spiritual master, follows the instruction of spiritual master, and engages himself in the service of the Supreme Lord, māyā-jāla chuṭe, pāya kṛṣṇera caraṇa, then he can get out of this network of illusory energy, and pāya kṛṣṇera caraṇa, and he can get the shelter of the lotus feet of Lord Kṛṣṇa.

What is that? Cow protection and agriculture. That is the duty of vaiśya. And the śūdras, they have no responsibility; therefore they serve these three higher class: the intelligent class, engaged in cultivation of knowledge; the administrator class, who are engaged in good government; and the mercantile class, who are looking to the productive side of this society.

Actually, Hindu . . . there is no such word as "Hindu" religion. We don't find in the Vedic scripture. Hindu religion . . . this "Hindu" word is given by the Muhammadans. They, they, they generally pronounce i as h. They . . . so there is river in the west, western side of India. There is river, Indus, Indus River. So Indus River the Muhammadans used to call "Hindus." From "Hindus" it has come to Hindustan, "the place of the Hindus."

So Hindu, Hindu religion is a modern term given by the foreigners. Actually the Indians, the bhāratīya, they, their religion is varṇāśrama-dharma, religion of four castes and four spiritual orders. Four spiritual orders and four social orders. The persons who follow these four orders of social status and four orders of spiritual advancement, they are called varṇāśrama. So "Hindu religion" is a miscalculation. Really, they are called varṇāśrama-dharma. That is the Vedic term.