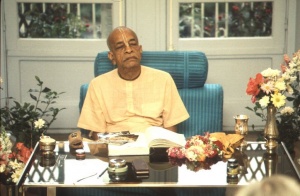 My dear Lord, devotional service unto You is the best path for self-realization. If someone gives up that path and engages in the cultivation of speculative knowledge, he will simply undergo a troublesome process and will not achieve his desired result. As a person who beats an empty husk of wheat cannot get grain, one who simply speculates cannot achieve self-realization. His only gain is trouble.

Loving service to the Supreme Person is the natural and eternal function of every living entity. If a person renounces his own constitutional function and instead laboriously seeks so-called enlightenment through impersonal, speculative knowledge, his result is simply the trouble and bother that come from following an artificial process. A fool may beat an empty husk, not knowing that the grain has already been removed. Similarly foolish is the person who throws his mind again and again into the pursuit of knowledge without surrendering to the Supreme Personality of Godhead, for it is the Supreme Personality of Godhead who is the very substance and goal of knowledge, just as grain is the substance and goal of the entire agricultural effort. Vedic knowledge or, indeed, material science without the Personality of Godhead is exactly like an empty and useless husk of wheat.

One may argue that by practicing yoga or cultivating impersonal knowledge one can acquire prestige, wealth, mystic powers or even impersonal liberation. But these so-called gains are actually useless, because they do not situate the living being in his constitutional position of loving service to the Supreme Lord. Therefore such results, being superfluous to the living being's essential nature, are impermanent. As stated in the Nṛsiṁha Purāṇa, patreṣu puṣpeṣu phaleṣu toyeṣv akrīta-labhyeṣu vadaiva satsu/ bhaktyā su-labhye puruṣe purāṇe muktyai kim arthaṁ kriyate prayatnaḥ: "Since the primeval Personality of Godhead is easily attained by offering Him such things as leaves, flowers, fruits and water, which are all found without difficulty, why does one need to endeavor for liberation separately?"

Although the process of devotional service to Lord Kṛṣṇa is very simple, it is extremely difficult for stubborn conditioned souls to completely humble themselves before the Supreme Personality of Godhead and absorb themselves twenty-four hours a day in His loving service. The mood of loving service is anathema to belligerent conditioned souls determined to defy God and enjoy. When such stubborn conditioned souls attempt to bypass surrendering to God through proud attempts at philosophical speculation, austerity, and yoga, they are turned back to the material platform by the powerful laws of God and violently merged into the heaving ocean of insignificance called the material world.