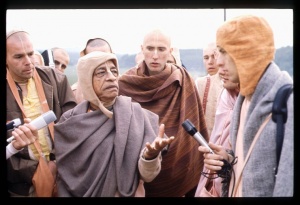 Nitya means eternal. Kṛṣṇa's pastimes, appearance and dis . . . disappearance, is continuous and eternal. There is no stoppage. Lord Caitanya says, bujhite nā pāre līlā kemane 'nitya' haya. Ordinary persons, common men, cannot understand how kṛṣṇa-līlā, Kṛṣṇa's appearance and disappearance, can be eternal. Generally, we think that Kṛṣṇa appeared five thousand years before; now He's no longer. So either He's dead or gone. Just like ordinary man takes his birth and stay here for some time, and then he goes away—no more, no trace of that particular man's activities. He's lost in the whirlpool of this material ocean.

Neither exactly in a similar body that particular living entity will again come back. Once. This form which you have got, material form, it is just like a bubble in the ocean. It is formed somehow or other according to our past actions and reactions, and it will stay for hundred years at most. Then it will disappear. And there will be no trace where that particular individual soul has gone.

Of course, there is account in the books of Supreme Personality of Godhead. Vedāhaṁ samatītāni (BG 7.26). He says, "I know everything." And He's always constant companion. As Supersoul of the individual soul, He knows. But we, the persons of a particular person's relatives, father, mother, brother, all these things—who knows? Nobody can give information.

But Kṛṣṇa's appearance and disappearance is not like that, because He's not different from His body. We are, in our conditioned stage, we are different from our body. But Kṛṣṇa and Kṛṣṇa's body is the same thing. This is to be understood. Sac-cid-ānanda-vigraha (Bs. 5.1).

Īśvaraḥ paramaḥ kṛṣṇaḥ sac-cid-ānanda vigraha. His form is eternal, blissful and full of knowledge. This material body is not like that. Therefore we cannot understand how kṛṣṇa-līlā is eternal, continuous eternal. That is being instructed by Lord Caitanya:

Jyotiścakra-pramāṇe. Jyotiścakra means orbit of the planets. That the . . . a planet is moving in its orbit continually. Similarly, kṛṣṇa-līlā is also just like an orbit. He's giving very nice example: orbit of the earth, orbit of the moon, orbit of the sun. The sun is also not fixed up. According to Vedic astronomy, the sun is also moving. We have got information from Śrīmad-Bhāgavatam and other Vedic literature, Brahma-saṁhitā.

There is a . . . a principal living entity, who is differently named. Just like this moon planet is called Candraloka because the predominating deity there is called Candra; the sun planet is called Sūryaloka because the predominating deity is called Sūrya. Sūrya, Candra—these are official names, just like "governor." But a particular name is also there. Governor is a particular person. Just like "president." President is a general name, but he has got his particular personal name.

Similarly, all these predominating deities of Candraloka and Sūryaloka, they are . . . these are official names. Anybody who's predominating over the sun planet, he's called Sūrya, but he has got his personal name. That name is Vivasvān. That is described in the Bhagavad-gītā: imaṁ vivasvate yogaṁ proktavān aham avyayam (BG 4.1). Who is that Vivasvān? Vivasvān is the present predominating deity in the sun planet. The sun planet, according to your modern science, it is fixed. But we cannot understand why sun should be fixed. Every planet has its orbit. So sun must be moving in the orbit.

Nobody can say what is there that the sun planet is diffusing unlimited temperature and heat for millions and trillions of years, but still, it is not exhausted. So this is called aśeṣa. Aśeṣa. There is no end. Just like you are in the fire. Unless you put some fuel, fuel, it is not possible to continue the temperature. But there, the supply is so sufficient that there is no end of temperature.

So . . . so He is giving example as the planets, sun planet, moon planet and other planets, are moving in their orbits, similarly, kṛṣṇa-līlā has got a orbit, and the līlā is going on. As the sun is moving or the planet . . . the earth planet is moving exactly at the same time. Just after twenty-four hours it will be meridian, and at twelve o'clock, just twenty-four hours. Similarly, Kṛṣṇa's līlā, exactly after certain millions of years, it will be seen in this planet. Similarly, there are innumerable universes, and it is moving from this, that, this, that, this.

Now, according to Vedic calculation, this earth has seven, I mean to say, islands. Just like crossing the sea, we have come to your country from India. The crossing the sea means there are different islands. Now you can calculate the Asia, Europe, America, and . . . and, how many?

Prabhupāda: Seven, there are?

Lord Caitanya describes by His mission, ārādhyo bhagavān vrajeśa-tanayas tad dhāma vṛndāvanam (Caitanya-mañjusā). Ārādhya, the Supreme Lord, Kṛṣṇa, is worshipable Deity, and His dhāma, and His headquarter—and His dhāma means headquarter—Vṛndāvana. Therefore Vṛndāvana is so important. When Kṛṣṇa comes . . . just like when the sun appears in your country there is a particular city or place . . . where it is where the sun first seen? Where it is?

Prabhupāda: In your country, America?

Prabhupāda: Where the sun is first seen?

Devotee: In America. Anybody know?

Prabhupāda: Maine? Just like Maine is the first place where is seen sun, similarly, Vṛndāvana is the place where Kṛṣṇa is seen first. The example is very nice. Sapta-dvīpāmbudhi laṅghi' phire krame krame.

Tina-sahasra . . . rātri-dine haya ṣaṣṭi-daṇḍa-parimāṇa (CC Madhya 20.388). The whole day and night is divided into sixty parts. Tina-sahasra chaya-śata 'pala' tāra māna. And these daṇḍas are again subdivided into three hundred and sixty palas. They are called pala. Daṇḍa and pala. Sūryodaya haite ṣaṣṭi-pala-kramodaya (CC Madhya 20.389). And the sun rises in every sixty pala. We can . . . we can see sun is rising, but not all of a sudden we can see. But gradually. That gradual, I mean to . . . elevation of the sun planet is . . . takes sixty pala time. Sei eka daṇḍa, aṣṭa daṇḍe 'prahara' haya. Prahara means three hours, and that is aṣṭa daṇḍa.

In each Manu's life, there are seventy-one catur-yugas, of . . . in each Manu's life. In the twenty-eighth catur-yuga, Kṛṣṇa, in the Dvāpara-yuga, appears. There is mathematical calculation when Kṛṣṇa appears. It is not accidental. Actual astronomical, mathematical calculation. Soayāśata vatsara kṛṣṇera prakaṭa-prakāśa (CC Madhya 20.392). And when He is in this universe, He remains here for 124 year . . . 125 years. When Kṛṣṇa was here, He was for 125 years. And when He was in the battlefield, His age was about 100 years, almost 100 years. Because, just after finishing the battlefield, He went to Dvārakā, and, after some days He disappeared. So I think it was more than hundred years when He was fighting as charioteer of Kṛṣṇa. Just imagine, a hundred-years-old man, how many children and grandchildren, great-grandchildren, might have.

In those days, the boys were married . . . still, in India, boys are married in early age. The boys and girls were married just after sixteen years, especially in the kṣatriya families. They are very developed, because they can eat very nicely, they live very nicely, so their body development is very nice. They can beget children even at fifteen years old—in those days, especially. So Kṛṣṇa had, at that time, great-grandchildren when He was fighting in the Kurukṣetra. He was . . . He came just to help His friend Arjuna. He did not take part in the fighting, He was charioteer.

So within these 125 years, all the pastimes that Kṛṣṇa displayed during His presence, all those things are going on in each and every universe, just like the sun planet is moving from one place to another. This is the idea of kṛṣṇa-līlā.

So saba līlā. And all the activities, they are manifested in either of the so many brahmāṇḍas. So at every second you just divide that 125 years into seconds, and all . . . less than second, what it is? Of course, I do not know. But if you divide in that way, then you can calculate how many universes are there. How many seconds are there in one hour?

Prabhupāda: Three thousand, six hundred seconds in one hour. Then what are the twenty-four hour? (laughs) Just see.

Prabhupāda: No. No. Just imagine that 360 seconds in one hour, so in one day we have got twenty-four hours. So 360 into twenty-four, that becomes the seconds in one day. Then you multiply it into thirty. That means in one month. Then you multiply it by twelve. Then it comes to one year. Such 125. So you can calculate. At least you can imagine how many universes are there, by that calculation of second, and if you go further detail . . .

So this is Kṛṣṇa's creative energy. You see? And He is aloof. All things, all these wonderful things are going on, but He's aloof. He's aloof. Nāhaṁ teṣu avasthitaḥ.

These are the inconceivable energy. And foolish rascals, they claim that "I am God." You see? God is not so cheap. One must know the science of God, how great is God. We cannot calculate. Those who cheaply take God, "God might be like me, you," just frog philosophy. The same frog philosophy. The frog is calculating the length and breadth of Atlantic Ocean, keeping itself in the well. You see? So similarly, these rascals, they are frogs in the well, and they are calculating the estimation of the length and breadth of Atlantic Ocean and claiming themselves as God.

So Lord Caitanya says: "Just like the time calculation of the sun is always present in the orbit of this earthly planet, similarly, in the orbit of kṛṣṇa-līlā, everything is happening in some universe." That is called nitya-līlā, eternal. Because it is happening eternally and continually, in either of innumerable planets, which we cannot calculate, therefore His pastime, appearance and disappearance are all eternal.

It is not a manufactured, false identification, but it is fact, and we have to follow great personalities like Lord Caitanya, Caitanya Mahāprabhu, who actually established the science of Kṛṣṇa. Kṛṣṇāya . . . as Rūpa Gosvāmī, he, he prayed Lord Caitanya:

"Oh, I offer my respectful obeisances unto You, because You are so magnanimous that You are distributing the love of Kṛṣṇa. Kṛṣṇa wanted, when He . . . when He was present, that 'You love Me, surrender unto Me.' Sarva-dharmān parityajya (BG 18.66). Now people misunderstood. But Your process of preaching Kṛṣṇa philosophy is so nice, by the saṅkīrtana movement, that everyone can understand the Kṛṣṇa philosophy very easily. Therefore You are the most magnanimous incarnation, and I offer my respectful obeisances unto You."