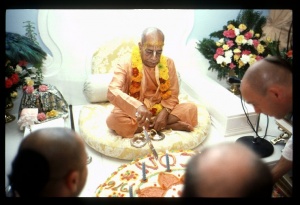 "I offer my full obeisances unto the feet of Śrī Nityānanda Rāma, a partial part of whom is Garbhodakaśāyī Viṣṇu. From the navel of Garbhodakaśāyī Viṣṇu sprouts the lotus that is the birthplace of Brahmā, the engineer of the universe. The stem of that lotus is the resting place of the multitude of planets."

Now, there are so many questions: "How these oceans are created?" The scientist says that it is a combination of hydrogen and oxygen gas. So wherefrom this gas came? The answer is here. Of course, from the gas, water comes out. If you cover one boiling pot, the gas, the vapor coming, and you will find spots of water. So from the gas, the water comes, and from the water, gas comes. This is nature's way. But the original water came from the perspiration of this Garbhodakaśāyī Viṣṇu. Just like you have got perspiration. You can produce, say, one gram or, say, one ounce of water through your bodily heat. That we have got practical experience. So if you can produce one ounce of water from your body, why God cannot produce volumes and millions of tons of water from His body? Where is the difficulty to understand? You are a tiny soul, and you have got a small body. You can produce one ounce of water by your perspiration. Why God, who has got the gigantic body, He cannot produce water, the Garbhodakaśāyī, the garbhodaka water? There is no reason to disbelieve.

This is called acintya-śakti, inconceivable power. Unless we accept inconceivable power of the Supreme Personality of Godhead, there is no meaning of God. If you think "a person" means like me or you. . . Yes, like me or you, God is also person. That is accepted in the Vedas: nityo nityānāṁ cetanaś cetanānām (Kaṭha Upaniṣad 2.2.13). There are many cetanas, living entities, and they are all eternal. They are many, plural number. Nityo nityānāṁ cetanaś cetanānām. But there is another nitya, nityo nityānāṁ, two. One is singular number, and one is plural number. What is the distinction? The distinction is eko yo bahūnāṁ vidadhāti kāmān. That singular number is particularly so powerful that He's supplying the necessities of all the plural number. The plural number, or the living entities, anantāya kalpate, they. . . you cannot count how many living entities are there. But they are to be maintained by the singular number. That is the distinction. God is person; you are also person; I am also person. We exist eternally, as it is stated in the Bhagavad-gītā. Kṛṣṇa said to Arjuna that "You, Me, all these soldiers and kings who have assembled there, it is not that they did not exist in the past. They are existing at present, and they will continue to exist in that way in the future." That is called nityānāṁ cetanānām.

So this is the process of creation, that the Garbhodakaśāyī, here, Kāraṇodakaśāyī Viṣṇu, from His breathing, He created from the breathing, from the pores of the body, He created innumerable universes, and in each and every universe He entered again. And entering there, He produced a lotus flower. Within the stem of that lotus flower there are so many planets. Just see the gigantic lotus stem. These are to be known from the śāstra. You cannot imagine how the creation takes place, huge creation. That sort of explanation—"There was a chunk, and it exploded"—no, these are not explanation. Here is explanation, in the śāstra. Śāstra cakṣuṣāt. You have to see by your śāstric eyes, not your limited, speculative eyes. That will not help us. Such gigantic business. . . You are a tiny soul. Your brain is very small. You cannot imagine the process of creation by your sporadic thoughts. That is not possible.

So the creation means that first of all the universes are created through the breathing period of Kāraṇodakaśāyī Viṣṇu. Then in each and every universe He enters as Garbhodakaśāyī Viṣṇu, and He creates. . . Half of the universe is filled up with water—the water came from His perspiration—and then He lies down there. Then He creates the lotus flower. And upon the lotus flower, a Brahmā is first-born. This is creation. That Brahmā means not an uncivilized human being; the most intelligent person, first creation. We cannot accept the rubbish theory of Darwin that there was no human being. That is his theory. That is not fact. He admits also that "I have made this by speculation." He has admitted. Our Dr. Svarūpa Dāmodara has quoted from his letter to a friend that he admits that he simply speculated. He has no factual knowledge. So you cannot understand the method of creation by your tiny brain's speculation. You give up this idea. This is not possible at all. You take knowledge from the śāstra, from the person who is perfect in knowledge. We have got knowledge. You have got knowledge. Somebody has got more knowledge than me, than you. But Kṛṣṇa says, mattaḥ parataraṁ nānyat kiñcid asti dhanañjaya (BG 7.7). You cannot find out a person who has got more knowledge than Kṛṣṇa. And God means one who has got full knowledge.

This whole material creation is existing in one part of His energy. That is also confirmed in the Brahma-saṁhitā: eko 'py asau racayituṁ jagad-aṇḍa-koṭi. One part of His energy, just to create the whole universes, so. . . the material world. Eko 'py asau racayituṁ jagad-aṇḍa koṭi, aṇḍāntara-stha-paramāṇu-cayāntara-stham (Bs. 5.35). He does not enter only within the universe, aṇḍāntara-stham, but He enters within the atom. Paramāṇu-cayāntara-stham. Govindam ādi-puruṣaṁ tam ahaṁ bhajāmi. Yac-chaktir asti jagad-aṇḍa-cayā yad-antam. Yac-chakti, whose energy is there within the universe. . . And ananta. That is. . . The universes are ananta, unlimited. That is creation. You cannot conceive of the creation by your, this tiny brain. That is not possible. That is Dr. Frog's philosophy. He's contemplating about the Atlantic Ocean, living in a three-feet well. That's all. That is not possible.

So this is the process of. . . Loka-sraṣṭuḥ sūtikā-dhāma dhātuḥ. Dhātu. Dhātu means one who creates. So Brahmā is the secondary creator. Kṛṣṇa, or Viṣṇu, He creates the situation. Then He gives him a seat, that lotus-flower like, and when he was puzzled. . . In the beginning, everything was dark. He could not understand "Wherefrom I am coming? What is my duty? Why I am sitting here?" When he was puzzled, then from within there was dictation that "You meditate. Tapaḥ: you undergo austerities. Then you'll gradually understand." So even Brahmā, the first creature of this creation, he had to meditate—"Why I am here, and what is the purpose of my coming here?" So we are also this, in the same position. We are the, I mean to say, dynasty expansion of Brahmā. Brahmā's son is Manu, or this sun-god. Manuṣya. Manuṣya means coming from Manu; therefore we are called manuṣya. So the same process: we are born ignorant, born ignorant. Human life is the chance to dissipate this ignorance, and that requires tapasya, not to live like cats and dogs, frivolous life. That will not help us. Tapaḥ. Tapo divyaṁ yena putrakā śuddhyet sattva (SB 5.5.1), that human life is meant for tapasya, austerities, not to live extravagant life, irresponsible life, like cats and dogs. No. That is not human life. That is animal life. So therefore śāstra says that you undergo austerities. Then your existence will be purified, and then pure knowledge you will get, and you will understand what is your position, why you are in this material world, why you are suffering the threefold miseries, why you are obliged to die, why you are obliged to become old man. So many things you have to learn. But if we learn like cats and dogs, then we spoil our life.

As Brahmā, the first created being, had to undergo tapasya to get information from the Supreme. . . The Supreme Lord is within you. He's there. But He will advise. When you are fixed up by tapasya, determined with vow, then He will talk to you. He's ready to talk, but you require to acquire the qualification to hear Him. And what is that qualification? This Kṛṣṇa consciousness, devotional service. As it is said in the Bhagavad-gītā, teṣāṁ satata-yuktānāṁ bhajatāṁ prīti-pūrvakam (BG 10.10). Such persons. . . (aside:) Don't do it. Teṣāṁ satata-yuktānām. Satata means always, twenty-four hours, not that five minutes I meditate and rest of the time I live like cats and dogs. No. This kind of meditation will not help you. Kṛṣṇa says satata. Satata means twenty-four hours. You have to mold your life in such a way that twenty-four hours you'll think of Kṛṣṇa. This is Kṛṣṇa consciousness. If you think, "Now I have chanted my sixteen rounds. Now I've finished my business. Now I can do whatever nonsense I like," no. Kṛṣṇa says no. Satata.

Therefore we have to plan our life in such a way that we haven't got any other engagement than service of Kṛṣṇa. This is required. Teṣāṁ satata-yuktānām. Satata means twenty-four hours. Yukta means engaged. What for? What is that engagement? Bhajatām. Bhajatām, bhaja sevayam: to serve Kṛṣṇa. Bhajatām. How? Prīti-pūrvakam. Not that "Oh, Kṛṣṇa has said. All right, let me do." No. With love and affection. Then you'll get attachment. Unless you develop love for Kṛṣṇa, you cannot be engaged twenty-four hours. That is not possible. Therefore it is said, prīti-pūrvakam: not officially, but with love. If you acquire this qualification, then you will talk with Kṛṣṇa who is within your heart. Then you'll talk. He is ready to talk, but He does not talk with rascals and fools. One must acquire the qualification to talk with Kṛṣṇa. Then you'll be able to talk with Deity. Within your heart Kṛṣṇa is situated there. Anywhere you go, Kṛṣṇa is within you, and He'll give you intelligence. Talking with Kṛṣṇa means buddhi-yogaṁ dadāmi tam. Teṣāṁ satata-yuktānāṁ bhajatāṁ prīti-pūrvakam (BG 10.10): "Those who are engaged, those who are qualified like this, then I give him intelligence."

The same thing happened to Brahmā. Because he had to create this whole universe—so many planets, so many demigods, so many human societies, so many, so many. . . There is no limit. He is the creator of everything. He's called, therefore, great-grandfather, prapitāmaha (BG 11.39). No, pitāmaha. Prapitāmaha is Kṛṣṇa, great-grandfather, because He instructed Brahmā. So the same thing: He can instruct you also. What is that instruction? Yena mām upayānti te. The instruction means how you can go back to home, back to Godhead, that instruction, not this instruction, that "You rot in this material world in this hellish condition of life." That, no. That instruction you'll get in the colleges and universities. But Kṛṣṇa's instruction is different. He'll give you instruction so that you can get rid of this hellish condition of life and go back to home and back to Godhead.