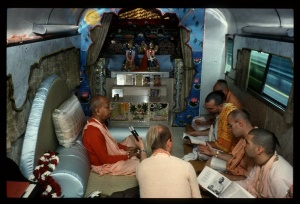 So ladies and gentlemen, I thank you very much for your kindly participating in our this Kṛṣṇa consciousness movement. As you know, from the very name, "Kṛṣṇa consciousness" . . . when this society was registered in 1966 in New York, some friend suggested that the society may be named as "God consciousness." "Kṛṣṇa" They thought that "Kṛṣṇa . . ." In the dictionary also, it is said: "Kṛṣṇa is a Hindu god's name," in English dictionary. But actually, if there is any name or if there any name can be fixed up for God, it is Kṛṣṇa.

God has practically no name. "No name" means He has name, but nobody knows how many names He has. (laughter) Yes, that is the way. Because God is unlimited, therefore His names must be also unlimited. You cannot fix up one name. Just like Kṛṣṇa is sometimes called Yaśodā-nandana, the son of Mother Yaśodā. That is quite all right, because He played the part of son of Yaśodā-mā. So Yaśodā-nandana means son of Yaśodā. Devakī-nandana, son of Devakī. Vasudeva-nandana, Nanda-nandana, Pārtha-sārathi.

Pārtha-sārathi means He acted as the charioteer of Arjuna, Pārtha, the son of Pṛthā. Arjuna's mother's name was Pṛthā, so Arjuna's another name—Pārtha. And because He acted as the charioteer of Pārtha, His name is Pārtha-sārathi. So actually, Kṛṣṇa, or God, has many dealings with His many devotees, and that particular dealing may be called His name. Therefore . . . He has innumerable devotees, therefore He has innumerable names. You cannot fix up one name.

By these six opulences, one can ascertain what is God. What are those opulences? That He's the proprietor of all riches. Here, we have got experience, one rich man. One may be very rich man, but nobody can say that he is the richest, there is no other man who is not richer than him. Nobody can say.

But Kṛṣṇa, when He was present, those who have read Śrīmad-Bhāgavatam, the history of Kṛṣṇa . . . we have described in our book, Kṛṣṇa: He had 16,108 wives. And each wife had a big palace, made of marble, bedecked with jewels, the furnitures made of ivory and gold. The descriptions are there. So in the history of the human society, you cannot find out any person who had 16,000 wives and 16,000 palaces.

Not only that, it is not that He used to go to one wife's house one day or one night. No. He was present in every one house personally. That means He expanded Himself in 16,108 forms. That is not very difficult. If God is unlimited, then He can expand Himself in unlimited forms; otherwise there is no meaning of unlimited. If God is omnipotent, He can maintain 16,000. Why 16,000? If He maintains 16,000,000's, still it is imperfect. Otherwise there is no meaning of omnipotency.

So these are the attractive features. Here, in this material world, if one man is very rich, he is attractive. Just like in your country there are rich men, Rockefeller, Ford. They are very attractive, on account of their richness. So aiśvaryasya sama . . . still, they do not possess all the wealth, riches of the world; still they are attractive. So how much God will be attractive, because He's the possessor of all the riches? Similarly, aiśvaryasya samagrasya, vīryasya, strength.

Kṛṣṇa, when He was present, from the beginning of His birth He had to fight. When He was only three months old, He was lying down on the lap of His mother, there was a Pūtanā demon. She wanted to kill Kṛṣṇa, but she was killed. So that is God. God is from the very beginning God. Not that by some meditation, by mystic power, one becomes God. Kṛṣṇa was not that type of God. Kṛṣṇa was God from the very beginning of His appearance. Vīryasya.

Aiśvaryasya samagrasya vīryasya, yaśasaḥ, then reputation. His fame, reputation, is still going on. Apart from us . . . we are devotees of Kṛṣṇa. We may glorify Him. But apart from us, many millions of people are there in this world; still, they know how much reputed and famous is Kṛṣṇa by His Bhagavad-gītā. In all countries, all over the world, this Bhagavad-gītā is read by all philosophers, all scholars, all religionists. Still, those who are reading Bhagavad-gītā . . .

So this planet is an insignificant planet within this universe, and within this planet, say, America is one country. And in that country, if there are so many attractive features, just imagine how much attractive feature must be there in God, who is the creator of the whole cosmic manifestation. How much He must be beautiful, who has created all beauties. Then, aiśvaryasya samagrasya vīryasya yaśasaḥ śriyaḥ.

Śriyaḥ means beauty; jñāna, and knowledge. If one man is perfectly advanced in knowledge, he's attractive. Some scientist, some philosopher, because they give nice knowledge, they're attractive. And Kṛṣṇa's knowledge, they're described in Śrīmad-Bhāgavatam, Bhagavad-gītā. You can study. You are studying. Now we are presenting in English translation sublime knowledge. There is no comparison in the world. And at the same time, vairāgya, renouncement. Not that because He has got so many things . . .

Practically, Kṛṣṇa is not here within this material world. Just like big man, his factory is going on, his business is going on, but it (is) not necessarily he has to be present there. Similarly, Kṛṣṇa's potency is working. His assistants, His so many demigods, they are working. They're describe in the śāstra. Just like the sun. Sun is the practically cause of this material cosmic manifestation. That is described in the Brahmā-saṁhitā:

Govinda . . . the sun is described as the eye, one of the eyes of God. He's seeing everything. You cannot hide yourself from the seeing of God, as you cannot hide yourself from the sunshine. So in this way, Kṛṣṇa. If God's name, there can be any name . . . and it is admitted in Vedic literature that God has got many names, but this Kṛṣṇa name is the chief name. Mukhya. Mukhya means principal. And it is very nicely explained: "all-attractive." In so many ways He's all-attractive.

So God's name . . . the Kṛṣṇa consciousness movement is propagating God's name, God's glory, God's activities, God's beauty, God's love. Everything. As we have got many things within this material world, all of them, they are in Kṛṣṇa, whatever you have got. Just like here, the most prominent feature in this material world is sex attraction. So that is there in Kṛṣṇa. We are worshiping Rādhā and Kṛṣṇa—attraction. But that attraction and this attraction is not the same. That is real, and here it is unreal. We are also dealing with everything which are present in the spiritual world, but it is only reflection. It has no real value.

Just like in the tailor's shop, sometimes there are so many beautiful dolls—a beautiful girl is standing. But nobody cares to see it, because everyone knows that it is false. However beautiful it may be, it is false. But a living woman, if she is beautiful, so many people see her. Because this is real. This is an example. Here the so-called living is also dead, because the body is matter. It is a lump of matter. As soon as the soul goes away from the same beautiful woman, nobody cares to see it, because it is as good as the doll on the window of tailor shop. The real factor is the spirit soul, and because here everything is made of dead matter, therefore it is simply imitation, reflection.

The real thing is in the spiritual world. There is a spiritual world. Those who have read Bhagavad-gītā, they can understand. The spiritual world is described there, paras tasmāt tu bhāvo 'nyo 'vyakto 'vyaktāt sanātanaḥ (BG 8.20). Bhāvaḥ means nature. There is another nature beyond this nature. We can see this nature up to the limit of the sky. The scientists, they're trying to go to the highest planet, but they are calculating it will take forty thousands of years. So who is going to live for forty thousands of years, go and come back? But there is planet.

So we cannot calculate even the length and breadth of this material world, what to speak of the spiritual world. Therefore we have to know from authoritative sources. That authoritative sources is Kṛṣṇa. Because we have already described, nobody is wiser or in knowledge than Kṛṣṇa. So Kṛṣṇa gives this knowledge, that paras tasmāt tu bhāvo 'nyo (BG 8.20): "Beyond this material world there is another spiritual sky." There are also innumerable planets. And that sky is far, far greater than this sky. It is one fourth only. And the spiritual sky is three fourth. That is described in the Bhagavad-gītā, ekāṁśena sthito jagat (BG 10.42). This is only one part, this material world. The other, spiritual world, is three fourth. Suppose God's creation is one hundred. It is only twenty-five percent; seventy-five percent is there. Similarly, the living entities also, a very small fragmental portion of the living entities are here. And there, in the spiritual world, the major portion are there.

Māyā . . . just like here also, if we say: "I don't care for the government," then what will be? So treason act. I'll be arrested. I'll be punished. Similarly, living entities are originally part and parcel of God, just like father and sons. The Christian people also understand, God is Supreme Father and we are all His sons. You go to church and pray, "God, give us our daily bread, Father." So that is conception in Bhagavad-gītā also. Kṛṣṇa says, "I am father of all living entities." Ahaṁ bīja-pradaḥ pitā.

A man sleeps; a dog sleeps. So because a man sleeps in a very nice apartment, that does not mean he's advanced more than the dog. The business is sleeping, that's all. Because man has discovered atomic weapon for defending, and the dog has his nails and teeth; he can also defend. So defending is there. You cannot say that, "Because I have got this atomic bomb, therefore I can conquer the whole world or whole universe." That is not possible. You can defend in your own way, and the dog can also defend in his own way.

Real advancement means to know God. That is advancement. If you are lacking that knowledge, what is God . . . and because you cannot understand . . . there are so many rascals, they are denying the existence of God. That is very nice. If there is no God, then they can go on with their sinful activities unrestricted: "There is no God. Very nice." But simply by your denying, God will not die. God is there. God is there, His administration is there. By His order, the sun is rising, the moon is rising, the water is flowing, the ocean is abiding by His order.

Everything under His order, everything going on nicely, without any change. How you can say God is dead? If there is some mismanagement, you can say there is no government, but if there is nice management, how you can say there is no government? So God is there. You do not know God. Therefore some of you say that "God is dead," "There is no God," "God has no form," "God is zero"—so many things. But no. We are firmly convinced that there is God, and Kṛṣṇa is God, and we are worshiping Him. That is Kṛṣṇa consciousness movement. Try to understand it.