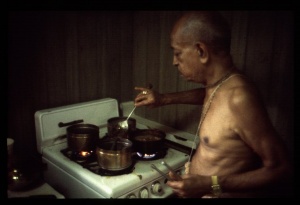 Śrī Caitanya Mahāprabhu then returned to His residence with His personal associates. Thus He turned the whole city of Vārāṇasī into another Navadvīpa [Nadīyā-nagara].

Both Navadvīpa and Vārāṇasī were celebrated for their highly educational activities. At the present time these cities are still inhabited by great, learned scholars, but Vārāṇasī is especially a center for Māyāvādī sannyāsīs who are learned scholars. However, unlike Navadvīpa, there are hardly any devotees in Vārāṇasī. Consequently a discussion of Śrīmad-Bhāgavatam was very rare in Vārāṇasī. In Navadvīpa, such a discussion was quite ordinary. After Śrī Caitanya Mahāprabhu visited Vārāṇasī and turned Prakāśānanda Sarasvatī and his disciples into Vaiṣṇavas, Vārāṇasī became like Navadvīpa because so many devotees began discussing Śrīmad-Bhāgavatam. Even at the present moment one can hear many discussions on Śrīmad-Bhāgavatam taking place on the banks of the Ganges. Many scholars and sannyāsīs gather there to hear Śrīmad-Bhāgavatam and perform saṅkīrtana.