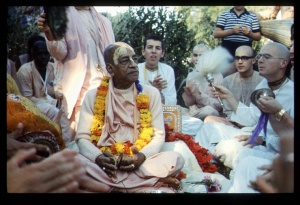 "Unless one is favored by a pure devotee, he cannot attain the platform of devotional service. To say nothing of kṛṣṇa-bhakti, one cannot even be relieved from the bondage of material existence.

"O son of Pṛthā, those who are not deluded, the great souls, are under the protection of the divine nature. They are fully engaged in devotional service because they know Me as the Supreme Personality of Godhead, original and inexhaustible." (Bg. 9.13)

One also has to associate with such a mahātmā who has accepted Kṛṣṇa as the supreme source of the entire creation. Without being a mahātmā, one cannot understand Kṛṣṇa's absolute position. A mahātmā is rare and transcendental, and he is a pure devotee of Lord Kṛṣṇa. Foolish people consider Kṛṣṇa a human being, and they consider Lord Kṛṣṇa's pure devotee an ordinary human being also. Whatever one may be, one must take shelter at the lotus feet of a devotee mahātmā and treat him as the most exalted well-wisher of all human society. We should take shelter of such a mahātmā and ask for his causeless mercy. Only by his benediction can one be relieved from attachment to a materialistic way of life. When one is thus relieved, he can engage in the Lord's transcendental loving service through the mercy of the mahātmā.