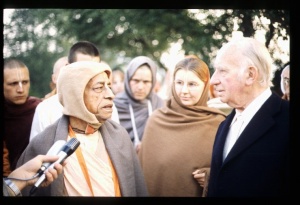 One who desires nothing but Kṛṣṇa and who is not influenced by the process of jñāna-mārga (cultivation of knowledge) actually becomes free from ignorance. A first-class person is one who is not influenced by karma (fruitive activity) or yoga (mystic power). He simply depends on Kṛṣṇa and is satisfied in his devotional service. According to Śrīmad-Bhāgavatam (SB 6.17.28): nārāyaṇa-parāḥ sarve na kutaścana bibhyati. Such a person is never afraid of anything. For him, heaven and hell are the same. Not knowing the situation of a nārāyaṇa-parāyaṇa, rascals become envious. By the grace of Nārāyaṇa, a devotee is situated in the most opulent position in the material world. Rascals are envious of Nārāyaṇa and His devotee, but the devotee endeavors to please another devotee of Nārāyaṇa because he knows that by pleasing Nārāyaṇa’s representative one directly pleases Lord Nārāyaṇa. Therefore a devotee offers the best comforts and facilities to his spiritual master. Outsiders who have no knowledge of Nārāyaṇa are envious of both Nārāyaṇa and His devotee. Consequently when they see that Nārāyaṇa’s devotee is opulently situated, they become even more envious. But when the devotee of Nārāyaṇa asks such foolish people to come live with him in the same comfortable situation, they do not agree because they cannot give up illicit sex, meat-eating, intoxication and gambling. Therefore the materialist refuses the company of a nārāyaṇa-parāyaṇa, although he is envious of the devotee’s material situation. In Western countries when ordinary men—storekeepers and workers—see our devotees living and eating sumptuously and yet not working, they become very eager to know where they get the money. Such people become envious and ask, “How is it possible to live so comfortably without working? How is it you have so many cars, bright faces and nice clothes?” Not knowing that Kṛṣṇa looks after His devotees, such people become surprised, and some become envious.