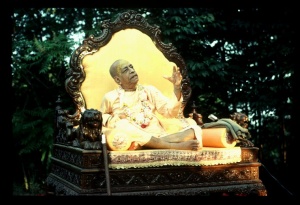 The devotee of Lord Kṛṣṇa has no desire other than serving Kṛṣṇa. Even so-called liberated people are full of desires. Fruitive actors desire better living accommodations, and jñānīs want to be one with the Supreme. Yogīs desire material opulence, yogic perfections and magic. All of these nondevotees are lusty (kāmī). Because they desire something, they cannot have peace.

The peace formula is given by Kṛṣṇa in the Bhagavad-gītā (BG 5.29):

One who simply understands that throughout the entire universe Kṛṣṇa is the supreme enjoyer and beneficiary of all kinds of sacrifices, penances and austerities, which should be performed only to attain His devotional service, that Kṛṣṇa is the Supreme Being and thus the proprietor of all the material worlds, and that Kṛṣṇa is the only friend who can actually do good to all living entities (suhṛdaṁ sarva-bhūtānām (BG 5.29))—one who understands these three principles about Kṛṣṇa immediately becomes desireless (niṣkāma) and therefore peaceful. A kṛṣṇa-bhakta knows that his friend and protector in all respects is Kṛṣṇa, who is able to do anything for His devotee. Kṛṣṇa says, kaunteya pratijānīhi na me bhaktaḥ praṇaśyati: (BG 9.31) “O son of Kuntī, declare it boldly that My devotee never perishes.” Since Kṛṣṇa gives this assurance, the devotee lives in Kṛṣṇa and has no desire for personal benefit. The background for the devotee is the all-good Himself. Why should the devotee aspire for something good for himself? His only business is to please the Supreme by rendering as much service as possible. A kṛṣṇa-bhakta has no desire for his own personal benefit. He is completely protected by the Supreme. Avaśya rakṣibe kṛṣṇa viśvāsa pālana. Bhaktivinoda Ṭhākura says that he is desireless because Kṛṣṇa will give him protection in all circumstances. It is not that he expects any assistance from Kṛṣṇa; he simply depends on Kṛṣṇa just as a child depends on his parents. The child does not know how to expect service from his parents, but he is always protected nevertheless. This is called niṣkāma (desirelessness).

Although karmīs, jñānīs and yogīs fulfill their desires by performing various activities, they are never satisfied. A karmī may work very hard to acquire a million dollars, but as soon as he gets a million dollars he desires another million. For the karmīs, there is no end of desire. The more the karmī gets, the more he desires. The jñānīs cannot be desireless because their intelligence is unsound. They want to merge into the Brahman effulgence, but even though they may be raised to that platform, they cannot be satisfied there. There are many jñānīs or sannyāsīs who, after taking sannyāsa and giving up the world as false, return to the world to engage in politics or philanthropy or to open schools and hospitals. This means that they could not attain the real Brahman (brahma satyam). They have to come down to the material platform to engage in philanthropic activity. Thus they again cultivate desires, and when these desires are exhausted, they desire something different. Therefore the jñānī cannot be niṣkāma, desireless. Nor can the yogīs be desireless, for they desire yogic perfections in order to exhibit some magical feats and gain popularity. People gather around these yogīs, and the yogīs desire more and more adulation. Because they misuse their mystic power, they fall down again to the material platform. It is not possible for them to become niṣkāma, desireless.

The conclusion is that only the devotees, who are simply satisfied in serving the Lord, can actually become desireless. Therefore Caitanya Mahāprabhu says here, kṛṣṇa-bhakta niṣkāma. Since the kṛṣṇa-bhakta, the devotee of Kṛṣṇa, is satisfied with Kṛṣṇa, there is no possibility of falldown.