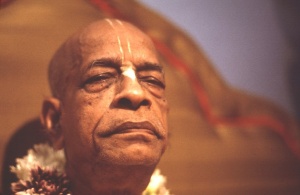 “In his Vedānta-sūtra Śrīla Vyāsadeva has described that everything is but a transformation of the energy of the Lord. Śaṅkarācārya, however, has misled the world by commenting that Vyāsadeva was mistaken. Thus he has raised great opposition to theism throughout the entire world.

Śrīla Bhaktivinoda Ṭhākura explains, “In the Vedanta-sūtra of Śrīla Vyāsadeva it is definitely stated that all cosmic manifestations result from transformations of various energies of the Lord. Śaṅkarācārya, however, not accepting the energy of the Lord, thinks that it is the Lord who is transformed. He has taken many clear statements from the Vedic literature and twisted them to try to prove that if the Lord, or the Absolute Truth, were transformed, His oneness would be disturbed. Thus he has accused Śrīla Vyāsadeva of being mistaken. In developing his philosophy of monism, therefore, he has established vivarta-vāda, or the Māyāvāda theory of illusion.”

In the Brahma-sūtra, Second Chapter, the first aphorism is as follows: tad-ananyatvam ārambhaṇa-śabdādibhyaḥ. Commenting on this sūtra in his Śārīraka-bhāṣya, Śaṅkarācārya has introduced the statement vācārambhaṇaṁ vikāro nāmadheyam from the Chāndogya Upaniṣad (6.1.4) to try to prove that acceptance of the transformation of the energy of the Supreme Lord is faulty. He has tried to defy this transformation of energy in a misguided way, which will be explained later. Since his conception of God is impersonal, he does not believe that the entire cosmic manifestation is a transformation of the energies of the Lord, for as soon as one accepts the various energies of the Absolute Truth, one must immediately accept the Absolute Truth to be personal, not impersonal. A person can create many things by the transformation of his energy. For example, a businessman transforms his energy by establishing many big factories or business organizations, yet he remains a person although his energy has been transformed into these many factories or business concerns. The Māyāvādī philosophers do not understand this simple fact. Their tiny brains and poor fund of knowledge cannot afford them sufficient enlightenment to realize that when a man’s energy is transformed, the man himself is not transformed but remains the same person.

Śrīla Vyāsadeva has explained that the Absolute Truth is a person who has different potencies. Merely by His desire that there be creation and by His glance (sa aikṣata), He created this material world (sa asṛjata). After creation, He remains the same person: He is not transformed into everything. One should accept that the Lord has inconceivable energies and that it is by His order and will that varieties of manifestations have come into existence. In the Vedic literature it is said, sa-tattvato ’nyathā-buddhir vikāra ity udāhṛtaḥ. This mantra indicates that from one fact another fact is generated. For example, a father is one fact, and a son generated from the father is a second fact. Thus both of them are truths, although one is generated from the other. This generation of a second, independent truth from a first truth is called vikāra, or transformation resulting in a by-product. The Supreme Brahman is the Absolute Truth, and the energies that have emanated from Him and are existing separately, such as the living entities and the cosmic manifestation, are also truths. This is an example of transformation, which is called vikāra or pariṇāma. To give another example of vikāra, milk is a truth, but the same milk may be transformed into yogurt. Thus yogurt is a transformation of milk, although the ingredients of yogurt and milk are the same.

In the Chāndogya Upaniṣad there is the following mantra: aitad-ātmyam idaṁ sarvam. This mantra indicates without a doubt that the entire world is Brahman. The Absolute Truth has inconceivable energies, as confirmed in the Śvetāśvatara Upaniṣad (parāsya śaktir vividhaiva śrūyate (CC Madhya 13.65, purport)), and the entire cosmic manifestation is evidence of these different energies of the Supreme Lord. The Supreme Lord is a fact, and therefore whatever is created by the Supreme Lord is also factual. Everything is true and complete (pūrṇam), but the original pūrṇam, the complete Absolute Truth, always remains the same. Pūrṇāt pūrṇam udacyate pūrṇasya pūrṇam ādāya (Śrī Īśopaniṣad, Invocation). The Absolute Truth is so perfect that although innumerable energies emanate from Him and manifest creations which appear to be different from Him, He nevertheless maintains His personality. He never deteriorates under any circumstances.

Nondevotees factually appreciate the wonderful creation of material nature, but they cannot appreciate the intelligence and energy of the Supreme Personality of Godhead, who is behind this material creation. Śrīpāda Rāmānujācārya, however, refers to a sūtra from the Aitareya Upaniṣad (1.1.1), ātmā vā idam agra āsīt, which points out that the supreme ātmā, the Absolute Truth, existed before the creation. One may argue, “If the Supreme Personality of Godhead is completely spiritual, how is it possible for Him to be the origin of creation and have within Himself both material and spiritual energies?” To answer this challenge, Śrīpāda Rāmānujācārya quotes a mantra from the Taittirīya Upaniṣad (3.1) that states:

This mantra confirms that the entire cosmic manifestation emanates from the Absolute Truth, rests upon the Absolute Truth and after annihilation again reenters the body of the Absolute Truth, the Supreme Personality of Godhead. The living entity is originally spiritual, and when he enters the spiritual world or the body of the Supreme Lord, he still retains his identity as an individual soul. In this connection Śrīpāda Rāmānujācārya gives the example that when a green bird enters a green tree it does not become one with the tree: it retains its identity as a bird, although it appears to merge with the greenness of the tree. To give another example, an animal that enters a forest keeps its individuality, although apparently the beast merges with the forest. Similarly, in material existence, both the material energy and the living entities of the marginal potency maintain their individuality. Thus although the energies of the Supreme Personality of Godhead interact within the cosmic manifestation, each keeps its separate individual existence. Merging with the material or spiritual energies, therefore, does not involve loss of individuality. According to Śrī Rāmānujapāda’s theory of Viśiṣṭādvaita, although all the energies of the Lord are one, each keeps its individuality (vaiśiṣṭya).