Śrī Caitanya-caritāmṛta - Madhya-līlā - Chapter 13: The Ecstatic Dancing of the Lord at Ratha-yātrā 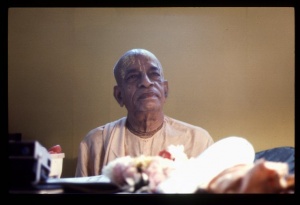 Indeed, the Personality of Godhead forgot Himself in the course of His transcendental pastimes, but His internal potency [līlā-śakti], knowing the intentions of the Lord, made all arrangements.

It is stated in the Upaniṣads:

“The Supreme Lord has multipotencies, which act so perfectly that all consciousness, strength and activity are being directed solely by His will.” (Śvetāśvatara Upaniṣad 6.8)

Śrī Caitanya Mahāprabhu exhibited His mystic power in presenting Himself simultaneously in each and every saṅkīrtana group. Most people thought that He was one, but some saw that He was many. The internal devotees could understand that the Lord, although one, was exhibiting Himself as many in the different saṅkīrtana groups. When Śrī Caitanya Mahāprabhu danced, He forgot Himself and was simply absorbed in ecstatic bliss. But His internal potency arranged everything perfectly. This is the difference between the internal and external potency. In the material world, the external potency (material energy) can act only after one endeavors at great length, but when the Supreme Lord desires, everything is performed automatically by the internal potency. By His will, things happen so nicely and perfectly that they appear to be carried out automatically. Sometimes the activities of the internal potency are exhibited in the material world. In fact, all the activities of material nature are actually performed by the inconceivable energies of the Lord, but so-called scientists and students of material nature are unable to understand ultimately how things are happening. They evasively conclude that everything is being done by nature, but they do not know that behind nature is the potent Supreme Personality of Godhead. Lord Kṛṣṇa explains this in the Bhagavad-gītā (BG 9.10):

“This material nature, which is one of My energies, is working under My direction, O son of Kuntī, producing all moving and nonmoving beings. Under its rule this manifestation is created and annihilated again and again.”