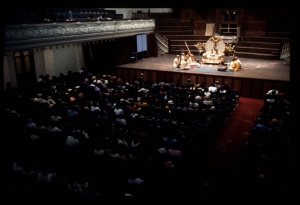 Prabhupāda: . . .etad anyathā ajñānam (BG 13.12). Find out Bhagavad-gītā. This is knowledge. All other things are bogus. Otherwise how could I convince big, big scientists? They are not ordinary men, Doctor, that Svarūpa Dāmodara, one of the first-class scientists. He has got very good degree from Calcutta University, from other university, M.A.C. and other. He is very intelligent boy. He studies science very particularly, means sound knowledge. How he's attached?

Jayapatākā: This is real knowledge.

Prabhupāda: This is real knowledge. Hmm.

Prabhupāda: Hmm. Not to mix with ordinary men. Aratir jana, general public. Just like this, our place—only devotion. This is vivikta, aloof from this world. We have no other business except Kṛṣṇa consc . . . bhakti. And aratir jana-saṁsadi, no, mean, association with ordinary person. No association. We can go and talk of some . . . for our own benefit or Kṛṣṇa. Otherwise we have no business with them. Noncooperation. We go to the public for preaching, not to associate with them—to give them association, so they may be benefited. Either he may be prime minister or this or that, we have no business with them. But for our purpose we go. Big, big karmīs, Life Member. So we have no personal concern, but for their benefit we go there. Their hard-earned money, if something is spent for this purpose, he'll be benefited. This is our . . . Otherwise we have no business with them. Aratir jana-saṁsadi. Then?

Prabhupāda: Etaj jñānam: these are knowledge. This is education. Then?

Prabhupāda: Anything apart from this, they're all rascaldom. Bās. That is again confirmed by Caitanya Mahāprabhu, vidyā-madhye kṛṣṇa . . . What is that?

Prabhupāda: Āra. So these things will be accepted by kṛṣṇa-bhakta, etaj jñānam. So whatever Kṛṣṇa has said, that is knowledge, vidyā. Everything nonsense. Therefore so boldly we say, "All rascal nonsense. Never mind it." That's a fact. That is a fact. Anyone . . . Harāv abhaktasya kuto mahad-guṇāḥ (SB 5.18.12). Anyone who is not devotee of Kṛṣṇa, bhagavad-bhakta—useless. Jaḍa-bidyā jato māyāra vaibhava, jībake karaye gādhā. Bhaktivinoda Ṭhākura has said. By this so-called material education one is already gādhā, go-khara, dehātma-buddhi, and he becomes still more, another staunch gādhā. Now if you speak the straight truth, they'll be angry. Mūrkhāyopadeśo hi. But this is fact.

Jayapatākā: You can speak, Śrīla Prabhupāda.

Prabhupāda: I speak. I said in Melbourne, "United Nation is association of barking dogs."

Jayapatākā: You have that expert quality.

Prabhupāda: Yes. I cannot check myself.

Prabhupāda: (laughs) Krodha bhakta-dveṣi-jane (Prema-bhakti-candrikā). That is Narottama Ṭhākura's instruction. You must be very angry, those who are against God and devotee. Very angry. Utilize your anger for them. Krodha bhakta-dveṣi-jane. That anger is service. Kṛṣṇa-sebā kāmārpaṇe. For Kṛṣṇa's service one should be mad. Kāma-krodha should be given up, but a bhakta does not give up. Utilize it. A bhakta should be very much kamut(?) for serving Kṛṣṇa. And he must utilize his anger for the bhakta-dveṣi, those who are not devotee. Kāma kṛṣṇa-kāmārpaṇe krodha bhakta-dveṣi-jane (Prema-bhakti-candrikā). We have nothing to give up like Māyāvādī—kāma, krodha, lobha, moha, mātsarya. Mātsarya may . . . That has to be . . . A bhakta cannot be envious. If a bhakta is angry upon them, that is not envious; that is for good. A bhakta should not be envious. Otherwise how he can preach? He's merciful. Even if he's angry, it is mercy. Therefore this mātsarya has no use for bhakta. Other things, they have use: kāma, krodha, lobha, moha. Not mātsarya. Mātsarya is very bad.

Jayapatākā: Yes. If this MLA actually pushes it through, then in one month . . .

Prabhupāda: In that MLA that gentleman is very intelligent.

Prabhupāda: Ambitious for Kṛṣṇa. Everyone should be ambitious, "How I shall become a great devotee?" That is very good. Yes. Again finger problem. (laughs) So electric is not working? Just see. In the evening, we . . . people want light—no light.

Jayapatākā: It works the whole day. Only in the evening it goes off.

Prabhupāda: Whole night also. Only evening, when you require it . . . (laughter) India's material advancement is artificial. They are not fit for it. In America, so long, no electricity every day, people would become mad. There would have been a revolution. Huh? Is it not?

Hari-śauri: Yes. They had a blackout in New York once for an hour or so.

Prabhupāda: Yes, I know that. I was that time.

Hari-śauri: Oh, you were there.

Prabhupāda: Not hour. It was four hours. And fortunately I was not out on the street. I was in my place. That accident took place just after few days of my arrival, 1965. One gentleman, he, I know, he brought me some candle. I had no candle even. Simply I was sitting in darkness. What can be done? But Kṛṣṇa sent him with some candle. Yes. (chuckling)

Hari-śauri: Nine months after that incident they had a record number of births . . .

Prabhupāda: What can they do in darkness? (laughter) That is the only engagement in darkness.

Jayapatākā: They could have chanted Hare Kṛṣṇa.

Prabhupāda: No . . . Even Hare Kṛṣṇa people. Nāviviktāsano bhavet, mātrā svasrā duhitrā vā (SB 9.19.17). It is strictly forbidden: "You should not sit alone even with your mother, sister or daughter, what to speak of wife." Balavān indriya-grāmo vidvāṁsam api karṣati: "The senses are so strong, even learned persons, advanced, they also become victimized." Balavān indriya-grāmaḥ. Balavān means "very strong." When the . . . It is forbidden even with mother, sister or . . . and daughter. That is the only capturing instrument in the material world. Maithunyam agāra, prison house of sex, this material world. It is a prison house, but locked up by sex. The ordinary prison house, they are locked up by guards, and here the locking process is sex. Maithunyam agāra. The words are selected in Bhāgavata. They are thinking free. (laughs) They are imprisoned, locked up. And everyone falsely thinking, "I am free. Our nation is free. I am free." What nonsense free? You are locked up already. That he does not . . . Now this word is used, maithunyam agāram ajñaḥ. He has preferred to remain in this prison locked up by sex because he is rascal. Maithunyam agāram ajñaḥ.

Pradyumna: Where is that, Śrīla Prabhupāda?

Vyāsadeva has done this sātvata-saṁhitā. Anartha. To live in this material world is anartha, unnecessary. Hmm? You have got it?

Pradyumna: It's Canto Five, Chapter Five, verse number seven. "Even though one may be very learned and wise, he is mad if he does not understand that the endeavor for sense gratification is a useless waste of time. Being forgetful of his own interest, he tries to be happy in the material world, centering his interests around his home, which is based on sexual intercourse and which brings him all kinds of material miseries. In this way one is no better than a foolish animal."

Hari-śauri: That man from Delhi said that he thought you were an incarnation of Vyāsadeva.

Prabhupāda: Yes. Any devotee in literary career, he is to be understood . . . Just like our Vṛndāvana dāsa Ṭhākura. He is described as incarnation of Vyāsadeva because Vyāsadeva wrote Bhāgavatam and he wrote Caitanya-bhāgavata.

Prabhupāda: Vyāsa-pūjā. Vyāsa-prasādam. Unless one is blessed by Vyāsadeva, he cannot write transcendental literature. So now you have very good cook, kīrtana is going on. It is Vaikuṇṭha. Maintain this status very nicely. You can. You are . . . From the very beginning you are. Do it very nicely. Tatra tiṣṭhāmi nārada yatra gāyanti mad-bhaktāḥ (Padma Purāṇa). If devotees chant always, that is Kṛṣṇa or Vaikuṇṭha. Tatra tiṣṭhā . . . Tatra tiṣṭhāmi. Yatra gāyanti mad-bhaktāḥ. They must be pure devotee and always talk about Kṛṣṇa, chant about Kṛṣṇa. Then it is Vaikuṇṭha. (pause) What about this generator? Is it going to work or not?

Jayapatākā: I'm not sure. I don't know who was working on that today. I just got back myself. There was some . . . They're hooking up, I think, the wires.

Prabhupāda: It must work. Otherwise . . .

Jayapatākā: Oh, it's guaranteed it will work. The electric supply officer was on a three-day leave, I heard. Therefore he couldn't make the . . .

Prabhupāda: So be after him. Do it. This is the first business. In Vṛndāvana we have got very good generator. As soon as stops, within a minute we can start generator. Very nice.

Jayapatākā: This is the same make.