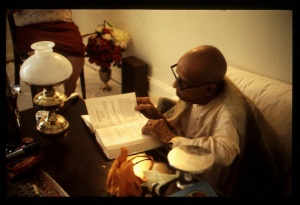 Girirāja: . . . cannot accept anything artificial, but Mr. Vijaya cannot keep up to that standard.

Girirāja: Oh, I know. But by chance, on this particular point . . .

Prabhupāda: So where is that?

Prabhupāda: This is their defect. Therefore they are failure. Must be failure. They do not take Bhagavad-gītā as it is. They mix with their false ideas, and therefore spoil, adulterate. And bhagavad-bhakti is without adulteration. Anyābhilāṣitā-śūnyam (CC Madhya 19.167). Anyābhilāṣitā-śūnyam (Bhakti-rasāmṛta-sindhu 1.1.11). Pure. No adulteration. That is bhakti. Jñāna-karmādy-anāvṛtam ānukūlyena kṛṣṇānuśīlanam. Sarvopādhi vinirmuktaṁ tat-paratvena nirmalam (CC Madhya 19.170). That is not nirmalam. Sa mala it is. With mala. With mala. Mala. It cannot be. Proportionately. So where she has sent this article?

Girirāja: In some of the newspapers in Vidor, and maybe Nagpur. He's writing for about three or five copies of those original clippings.

Prabhupāda: He has written very nicely. Good writer. Picked up the essence of the movement. That was published. Isko chapo. Print this.

Prabhupāda: So distribute them. (all talking together) Ye jab se hamare hindu magazine chape aisa kisi me bhi nahi hai. Since our Hindu magazines have been printed, there has been no mention like this anywhere . . . (indistinct) . . . Bhāgavata Darśana?

Gopāla Kṛṣṇa: Next issue. This issue is almost finished. Next one.

Indian man: Well, I don't know. It will be a big program there from part of Madhava(?) Mission. They've spent four lakhs rupees.

Gopāla Kṛṣṇa: They never . . . I never thought they had so much money even for their own projects.

Indian man: They collect from the big sects . . . (indistinct) . . . he is very influenced. Any of the sects can give for this. For Kumbha Mela, all the Marwari want to wash off their all the sins they did. (laughter)

Prabhupāda: So explain with that purpose. At least, they are . . . (indistinct) . . . (break) You cannot give up these four things: yajña, dāna, tapasya. So yajña for the brahmacārīs, begin yajña. And dāna for the gṛhasthas, and tapasya for the sannyāsīs. Yajña-dāna-tapaḥ-kriyāḥ na tyājyam, Kṛṣṇa says. Do not give up this, "I have become sannyāsī, therefore I'll give up my tapasya also." Sannyāsī means the life of tapasya. If you give up tapasya also, then what remains? How you become a sannyāsa? Yajña-dāna-tapaḥ-kriyāḥ na tyājyaṁ kāryam eva tat (BG 18.5). It must be continued. And again He stresses, yajño dānaṁ tapaś krya pāvanāni manīṣiṇām. Even if you think that you have become very great, "Now I'm very exalted personality. I don't require. I have become paramahaṁsa," no, no, no, no. This yajña-dāna-tapaḥ-kriyāḥ, even if you are very exalted, still, it will purify you more, these things. Yajño dānaṁ tapaś kriyāḥ pāvanāni manīṣiṇām. In any condition of life these things cannot be given up.

So those who are in sense, gṛhasthas, they must give in charity, at least fifty percent of their income. That was shown by Rūpa Gosvāmī. He, fifty percent. Dānam means not to the daridra-nārāyaṇa. Dānam means to the brāhmaṇa, Vaiṣṇava. In our śāstra, charity is recommended to be given to the high-class men, brāhmaṇas and Vaiṣṇavas. They know how to spend money. Therefore dātavyam iti yad dānaṁ tad dānaṁ sāttvikam ucyate (BG 17.20). Just like this Kṛṣṇa consciousness movement, they are appreciating. So all the charity should come here. Then it is properly utilized. Because we do not use a single paisa for anything of sense gratification. We do not even smoke, we do not take tea, we lie down on the floor. Not a single paisa is spent for our sense gratification. Everything is utilized for Kṛṣṇa. Therefore all charity should come here. Properly spent. But if we misspend, that is our fault. Single paisa we spend for our sense gratification, that is fault of us. And people should give at least fifty percent of their income to this movement. Twenty-five percent to the family, and twenty-five percent let him keep for himself in case of emergency.

This is the example shown by Rūpa Gosvāmī. So there was emergency. Everything they showed practically. Sanātana Gosvāmī was arrested. Whatever money they kept for themselves, that was given as bribe to the jail superintendent and got out of jail. This is example given by Gosvāmīs, that fifty percent was given to the brāhmaṇas and Vaiṣṇavas, fifty percent they deposited with the local . . . formerly, the bāniyās were bankers, village bankers. Whatever one has got, extra money, they should deposit, and the bāniyās will give him some interest and utilize the money. He will not usurp the money. People believe, just like bank, everywhere, crores of rupees they are collecting daily, because people know, "As soon as I shall want the money, it will be paid." So bāniyās were very honest. By others' money they would prosper, and the money is ready. Because they were doing with commodities, even he has no cash money he can immediately sell something and pay. That was the credit. That was the credit. Then people believed them. The village bankers were these grocers, especially the gold merchants. Therefore the gold merchants were bankers and dealers in gold. Suvarṇa-vaṇik. They had position. They have got stock of ornaments, gold ornaments, silver utensils. So you can believe in him, that by putting in his custody one hundred, one thousand rupees, he can deliver, at any moment, the bankers. And Rūpa Gosvāmī did it practically. Some money for emergency, some money . . . relatives, they also expect. That is allowed. So they should be given something. Not that cent percent. At least twenty-five percent to the relatives and twenty-five percent for personal. And fifty percent for Kṛṣṇa. This is the system.

So this is called dānam. Kṛṣṇa also says, kuruṣva tad mad-arpaṇam (BG 9.27): "If you want to give in charity, give it to Me." Kuruṣva tad mad-arpaṇam. Dadāsi yat. "If you have got some capacity to give something, give it to Me." He never said to daridra-nārāyaṇa. I do not know how they manufacture these things. Kṛṣṇa says: "Give it to Me." He's not daridra. He's Nārāyaṇa, but He's not daridra. So the principle is to give to the richest Nārāyaṇa, not daridra-nārāyaṇa. But these rascals misinterpret that daridra has become Nārāyaṇa. How daridra can become Nārāyaṇa? This is going on. And therefore there is no effect. There is no effect. See from practical what Vivekananda has done? But they have made propaganda, false propaganda—they have got roads. In a city like Bombay, big road, Vivekananda. But they do not care what Vivekananda has done.

Indian devotee: Even they got road, in the road so many nonsense going on.

Prabhupāda: That every road is there. We have no such thing. But he's not recognized in . . . wherefrom he has got the advertisement that in America he has done tremendous work? What they have done?

Girirāja: The government may like to popularize him because he preached the cult of "work hard."

Indian man: He can't do anything himself.

Indian devotee: Other day one man was telling me they bought two of your Bhāgavatams, Ramakrishna Mission. He said that one Ranganath Swami from South India, from Hyderabad, he was lecturing there, but he was . . . when he was lecturing he had your Bhāgavatam, First Canto, Part One in his hand, and he was speaking from there. (laughter) I said it is very good.

Prabhupāda: Aap kidhar se aye hain? Where have you come from?

Prabhupāda: Accha. I see. Give him prasāda. Ye prasad pake jaiyega. Have this prasadam and go.

Indian devotee: Many ācāryas, they imitate you. They read your books and take some of this part, and what is useful for them they use on their lecture. How we should stop them? (break)

Hari-śauri: At least part of the lecture's going to be all right. (laughs)

Prabhupāda: They cannot utilize my writing in their favor.

Indian devotee: No, some of the thing they take for their favor. They glory their own. They read your books and they glorify their own.

Indian devotee: So we should stop them like that.

Prabhupāda: No, no. Don't stop. They cannot do it.

Prabhupāda: Ranganath was speaking from my book?

Indian devotee: Yes, he was quoting that śloka, I remember, from First Canto, Part One. That one our Life Members . . . they were all the . . . all the big people, they goes there. So he told me when he came, he took a Bhāgavatam. He said that, "Today Ranganath had read your book." I said that they had bought two books from me. He said that he opened that like this. Then he saw the cover of our book, so he was quoting śloka from that, and he was reading the purport and giving speech on that. Because there is no such edition in English on Bhāgavatam except yours. So that I was very much pleased, actually, there to know when I heard that.

Prabhupāda: In the beginning also they purchased. When I published three copies in Delhi they purchased, because such translation is not there. So, that is all.