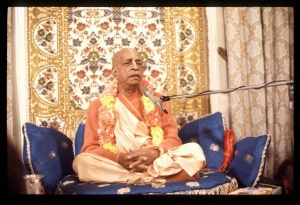 The yogīs should perform acts for the advancement of human society. There are many purificatory processes for advancing a human being to spiritual life. The marriage ceremony, for example, is considered to be one of these sacrifices. It is called vivāha-yajña. Should a sannyāsī, who is in the renounced order of life and who has given up his family relations, encourage the marriage ceremony? The Lord says here that any sacrifice which is meant for human welfare should never be given up. Vivāha-yajña, the marriage ceremony, is meant to regulate the human mind to become peaceful for spiritual advancement. For most men, this vivāha-yajña should be encouraged even by persons in the renounced order of life. Sannyasīs should never associate with women, but that does not mean that one who is in the lower stages of life, a young man, should not accept a wife in the marriage ceremony. All prescribed sacrifices are meant for achieving the Supreme Lord. Therefore, in the lower stages, they should not be given up. Similarly, charity is for the purification of the heart. If charity is given to suitable persons, as described previously, it leads one to advanced spiritual life.